The Latest and (Mostly) Greatest #50 by Dan! 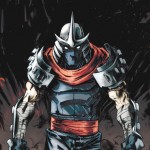 Did I actually take last week off? Yes, but it wasn’t much of a break while working the Phoenix Comics Con…but we’ve survived! So it’s on to reviews. Let’s do this! Teenage Mutant Ninja Turtles #10 Writer: Tom Waltz Artist: Dan Duncan Good news everyone! This series, which basically rebooted itself around the same time as the New DC 52, has stayed consistently strong and fantastic for its almost full-year run of comics! I’ve been reading the Mirage Studios version of these comics and it’s essentially rehashing the same steps that these comics hit, but bringing them to a new … Continue reading →