The Latest and (Mostly) Greatest #30

All right folks! After a brief hiatus due to unforeseen circumstances, not my fault, we’re back in business! Now that I’m done refusing to take blame, let’s do this! 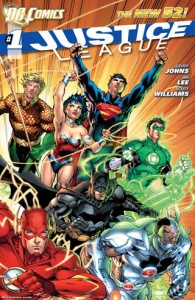 C’mon folks, did you really think I’d start my reviews and NOT talk about this? Really? Well guess what, this is the flagship title of the entire DCnU, it’s pretty much the only comic that really matters this week, and how do you think it all went down? It’s a great big “meh” ladies and gentlemen. I had my dad read it just to see how a “non-comic” person felt, and he basically had the same reaction. The main problem is that it’s a Justice League comic, WITHOUT the Justice League. We get to see what is essentially the first meeting of GL and Batman, a brief piece of Superman, and a really tiny intro to Vic Stone, but it doesn’t quite have the pay off you expect from what’s supposed to be this grand title. The humor bits actually do work, and it is very pretty to look at, but it left me feeling more like I just read a zero issue. I’ll give this team credit and hold onto the belief that it will have some kind of pay off, but it may take a little while, and I’m not sure that’s what they were really going for. 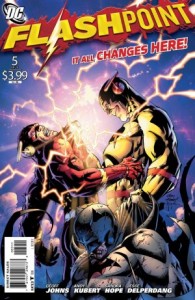 This is, of course, the finale to the last big event before everything sets off. I’m gunna spoil it for you folks, because that’s just what I do. It turns out that this entire situation was Barry Allen’s fault, and through use of the cosmic treadmill, he’s the one that distorted time. It’s an interesting idea, but I don’t feel like in the final piece, he actually learned any kind of lesson. He just shrugged his shoulders, corrected the screw-up and moved on with his life. He also didn’t really get closure with the main villain (the new Batman covered that for him). It felt like through this entire Flash-heavy event, it turned out that he wasn’t even the real hero, he didn’t get what he actually wanted, and no one is better off in any way. It’s a strange ending that maybe I’m misreading, but that’s just how I interpreted it. Also worth noting is the double-page spread featuring a new lady who apparently “knows what’s happening” with the new universe, and she pops up in the JLA issue too. Possible future storylines…? 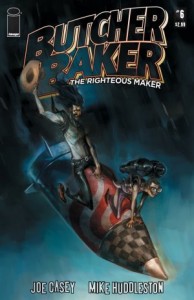 Now back into lighter fare, we get ourselves a big dose of Butcher Baker. I’m not sure if I’ve said this before, but Huddleston makes this book. It seems as if Casey is going with a “throw it at the wall and see what sticks” attitude to his story, so Huddleston goes with a “what style will I be on this page?” interpretation of the book. It feels like each page has been drawn by a different artist, and it’s absolutely amazing to look at.  It’s also uber-violent, gross-out, in-your-face, no-nonsense debauchery, and it’s absolutely excellent. If you don’t mind confusion or violence, this is the book for you. And who doesn’t love a Dr. Strangelove homage cover? 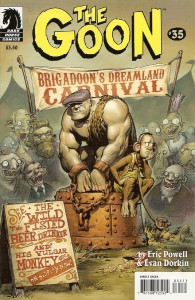 Midgets of All Nations! The Ten-In-One, The Ossified Man! All these and more are part of the latest issue of The Goon. With a guest writer in Beasts of Burden Writer Dorkin, the Goon travels into a Carnival where the Freaks run the show and pick on the normal people. As always, the Goon and Franky won’t take this lying down, and some of the most bizarre hilarity ensues. Powell’s painted work as always is just worth staring at, but this issue was spectacularly over-the-top in terms of ridiculous content. Add to everything that happens the fact that it ends with a tribute to the 20’s movie Freaks (yes, I was raised weird enough to know that), and you’ve got yourself some good ol’ fashioned comic goodness.

After the passable-but-nothing-special work by Brubaker, and the Dear-God-let’s-pretend-that-never-happened Nick Spencer run, Warren Ellis steps in to help set things right for the Secret Avengers. The covert espionage team finally starts doing some sweet covert espionage. Add to this the face that McKelvie is one of the best artists that Marvel has in their stock, and you get yourself a darn good book. It’s hard to explain what makes McKelvie so great, it’s a combination of clean lines, mixed with attention to detail make him one to watch. If you want to see some older stuff check out Phonogram. Wait? You’ve never heard of Phonogram? Maybe that’s why they aren’t making it anymore… You jerks… 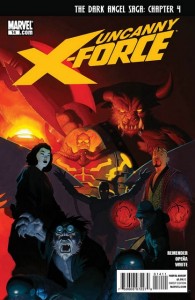 Gotta love a tribute piece to Age of Apocalypse, don’t ya? Well I do, and that’s what’s made this story so good. As a kid I used to love the idea of Apocalypse and his henchman, and Remender’s putting his own spin on how they work. He brought back popular characters, but also created a few of his own that look like they could hold up as villains in the future. The last few issues haven’t been as strong art-wise, but the return of Opeña is a welcome surprise. This is the kind of story that X-fans would love to see, so make sure to check it out before it’s gone!

This has been an excellent mini-series by a variety of artists and writers of a high caliber. This fourth issue really goes more of the “bizarre” route with Scott Hampton, Tony Harris, Brendan McCarthy and Ashley Wood doing the art chores. Basically, the only way they could have made a stranger looking book would be to have Bill Sienkiewicz do a contribution. But what’s so interesting is that all the writer are fairly well-known for being regular traditional superhero authors. So no matter how weird the story looks, you’re getting a straight-forward Rocketeer story to back it up. It’s good stuff, interesting in every page, and the collection of all four of these issues will be a must-have for any Dave Steven’s or Rocketeer fan.

And that’s it! I talked about the important stuff, and not much else came out this week. I’ll see you soon for the usual second round!