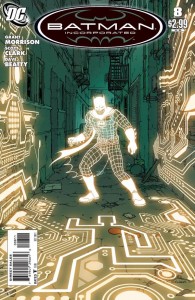 Bruce Wayne is showing off his “Internet 3.0” to a bunch of super-rich investors via virtual reality, and cyberterrorists attack, so he and Oracle team up to kick their digital butts. Very very cool graphics, typically dense Morrison concepts (sample dialog from page two: “The city of numbers is on fire! All must kneel to the worm captain!“), a striking cover, and a comic that delivers an actual beginning, middle and conclusion, all in one issue. I’m sorry, but there’s something wrong with you if you don’t buy this book. 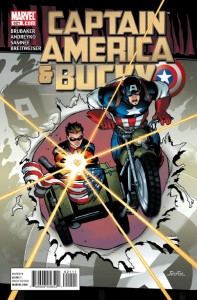 This is the “old” Captain America title, but, with Cap having just received his own brand-new book, this one is now focusing on early-’40s adventures (presumably for readers, er, “cap”tivated by the movie); here, we’re very early in the guys’ hero careers, from before Rogers and Barnes got shipped overseas. The twin pieces of good news are (1) the co-writing by Brubaker, who understands Rogers and what kind of adventures work with him better than just about anyone this side of Mark Waid, and (2) the art by Samnee, who was responsible for the sadly underappreciated Thor the Mighty. Samnee’s great at the ’40s milieu: costumes, buildings,  battles with homeland spies, motorcycle/train chases, and dates at the circus; there’s a lot to admire about his art and style. Much like Batman Incorporated — but for different reasons — this is a comic that will make you happy to have read it. 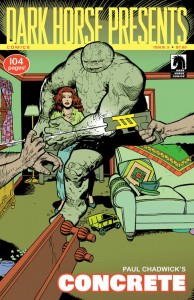 … and a few others, too — there are 104 pages of cmics here, for $7.99, and if you look at that creative roster again you’ll see why it’s worth it. Many of the pieces are chapters of ongoing stories, but Chadwick shows how to do a perfect little Concrete tale in eight pages; Gibbons and Corben offer stand-alones, too. The range of art styles, from the young guns to the old pros, is breathtaking, and there’s enough here to keep any comics fan occupied for many hours (and a lot to mull over, from the Steranko interview where he claims that his Red Tide, which is excerpted here, was the first graphic novel — no, Jim, it’s an illustrated text, which is not the same thing — to contemplating a drinking game wherein every time Neal Adams has a clunky piece of dialog the reader has to take a shot, which would lead to a lot of hammered readers; in the panel where the hero says “Sorry, Lionel. They’ll pay for that. Word.” that “word” is probably worth a bottle just by itself). 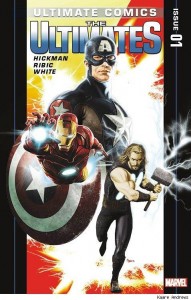 Nick Fury goes to work, and begins a very long day juggling various crises. This gives Hickman a chance to introduce the many characters and aspects of the Ultimates quickly; as in FF, his strength is his massive and generous imagination, so there are a lot of interesting things going on. None of them get resolved — of course, it’s only the first issue — but since Hickman’s weakness in the FF has been that, having set up a number of cool concepts, he doesn’t always seem certain about what to do with them — his plotting isn’t particularly linear — that may become a problem here too. Ribic is OK at handling the large group of actors, and has a couple of big panels that show he can deal with spectacle; his art’s sometimes on the murky side, shadowy and hard to follow, but that may be partly a function of the plot and the coloring. For a first issue, this offers enough to bring a reader back for more; if that’s faint praise, then hey: at least it’s praise.

One of the things that made Millar’s Ultimates such a mandatory read was that he made sure to include at least a couple of… well, in TV they’d be called “water-cooler moments,” but in comics I guess they’re just “WTF” ones: panels or scenes that are so startling or over-the-top that you just have to talk about them with other readers. That’s become a Millar trademark, and this issue has at least one; as always, the Romita/Palmer art drives it home, and makes it work even better. Yes, there are complaints to be made about the violence and the language, but that’s sort of the point: the book’s a guilty pleasure, but delivers that pleasure gleefully and unapolagetically; no wonder so many late-teenage and early-twenties readers like it. 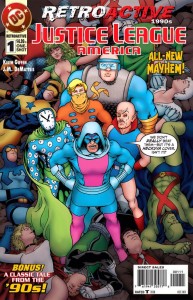 The Retroactive concept — where DC united some of their major creative teams on titles like Flash, Batman, Green Lantern and the JLA from previous decades — worked pretty well for the ’70s, and even the ’80s, but lost steam when it got to the ’90s — because, well, frankly, a lot of DC books kinda sucked by then; maybe it’s just that the period’s too recent to have had its suckiness erased by the warm glow of nostalgia yet. This comic’s a happy exception, though, because it involves the fondly-remembered “bwahaha” JLA, and its original creative team is still available and still works very well together — the humor, the rhythms of the dialogue, and the various quirks of the large cast of characters, both heroic and villainous, are just as entertaining as they were 20 years ago. When older readers today complain that comics aren’t as “fun” as they used to be, this is precisely the book they have in mind; it’s nice to see its creators haven’t lost their touch. 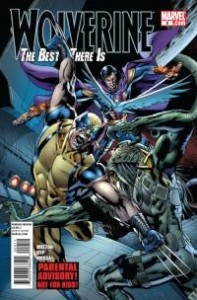 I’ve pretty much given up on the other Wolverine book — as much as I admire the writer Jason Aaron, I’m just not feeling his work over there; it’s been spending most of its time just beating poor old Logan down, and instead of being exciting or offering lurid cheap thrills, it’s just depressing. This book, though, has grown on me; that’s partly because of the obsessively-detailed art by Ryp, who seems to take a lot of pleasure in drawing people doing selfish or terrible things (usually, they’re either smirking or looking pissed off, but they all seem to be in on some infectious cosmic joke), and in subjecting Wolverine to various physical indignities. The thing is, it’s not depressing; that’s due to Huston’s tone, which has enough gleeful grindhouse pizzazz (something that Aaron himself is usually good at: see his earlier Ghost Rider series) to bring it over the top and safely home. By the time the space shark with the steel octopus tentacles bursts through the windshield and the fight in a vacuum begins, you can’t help but smile. 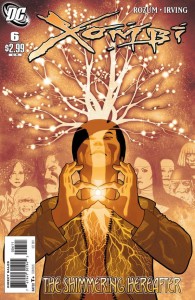 Like Secret Six, this has been a quirky, under-the-radar little gem, not quite superhero and not quite horror, and it’s a shame that, in the destruction and reboot of the entire DC line, it’s been collateral damage.  At least this initial arc can be collected into a trade, and readers will still be able to appreciate Rozum’s imaginative occult menaces and Irving’s sophisticated panel layouts and expressions; like its nanite-infested title character, it might be a lot harder to kill than we think. 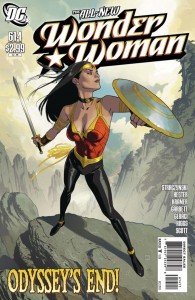 This is the last week of the “old” DC, so every title is wrapping up its story, and laying the groundwork for the new paradigm. For many, that’s an occasion to reminisce and reflect on what makes their characters work: both Wonder Woman #614 and Action #904 take this route. For others, it’s a chance to go wild and shake things up, usually by killing a major character, secure in the knowledge that next week’s reboot will render the story meaningless anyway; that’s the technique favored by most of the Flashpoint mini-series, including Hal Jordan #3,  Project: Superman #3 and Kid Flash Lost #3 (although that last one offers an ending that seems to tie in to the 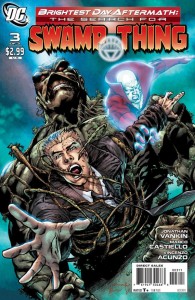 climax of next week’s Flashpoint #5 more strongly than any of the others), and also by Justice Society of America #54. Finally, The Search for Swamp Thing #3 solves the problem by just… stopping; this was a mini-series that resolved no problems, created no new ideas, and offered no character growth: it established Swampy and John Constantine in the main DC Universe, instead of the Vertigo one, gave John the opportunity to blow smoke in both Batman and Superman’s faces and say stereotypically British things, and… what? The nonending here makes me less likely to care about the new Swamp Thing relaunch: more buzzkill than buzz, it’s a puzzling choice, and certainly the opposite of what DC intended.

With 40 years of experience in comic reading, collecting and reviewing, English Professor Phil Mateer has an encyclopedic mind for comics. Feel free to ask Phil about storylines, characters, artists or for that matter, any comic book trivia. He will post your questions and answers on the AABC blog. His knowledge is unparalleled! He is also our warehouse manager, so if you are looking for that hard to find comic book, ask Phil!
View all posts by Phil →
This entry was posted in New Comics, Reviews and tagged Batman Incorporated, Captain America, Chris Samnee, Dark Horse Presents, grant Morrison, Justice League, Kick Ass, Mark Millar, Neal Adams, Paul Chadwick, Ultimates, Wolverine, Xombi. Bookmark the permalink.