And we’re back. No seriously folks, I’ve done 30 of these things. How ridiculous is that? Eventually I’ve gotta run out of comics, but not yet. Let’s do this! 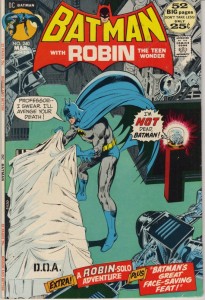 I’m not gunna lie folks, I grabbed this based purely on the cover. It’s hilarious. It turns out that this “head-in-a-jar” story is really a Ra’s and Talia Al Ghul story, which isn’t surprising with Denny O’Neil writing. It’s a trippy sci-fi story that really doesn’t advance any stronger plot, but it’s a fun little one-shot story. In addition there are two back-ups. First, A Robin story. Not really my thing, but I’m sure that this kind of story is always somebody’s bag. In this one Robin goes in disguise as a black man (not a joke) and it didn’t make any sense at all. The other story is a classic reprint from Batman #164. This book has everything; what could you possibly complain about? More information can be found HERE

Hey Kids! Have you ever heard of Batman? Well he’s still around for the reboot. Look for him in Batman, Detective Comics, Justice League, and probably every other bat-related book. That also means, Nightwing, Batgirl and others. Check them out, as they all start over the next couple of weeks. 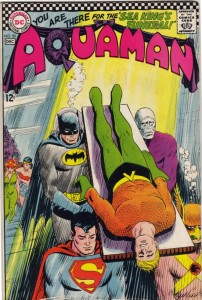 What’s so fascinating about this book is again the cover. Why does Batman need a breathing tank underwater and Hawkman doesn’t? These are questions that must be answered! I’m not gunna lie, this book fits into all the stereotypes that you expect from Aquaman. He fights a giant crab with laser eyes. Aqualad is reading a “Sea Imp” (his words, not mine), and there’s even a “Swordfish Squad” that helps trap the evil Mongo and his forces. Contrary to the cover, Aquaman is literally dead for about two pages. Gotta love that silver age payoff based purely on the cover. Good times. More info can be found HERE

Aquaman is coming back as part of the DC relaunch. Look for him in Justice League (but not the first issue… yet) and his own Aquaman series, done by the creators of Blackest Night. 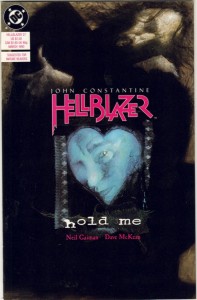 This is probably the hardest issue to find of any in the Hellblazer run. It’s most notable for being the only issue written by Neil Gaiman, and the rare interior art of Dave McKean. To put it simply, this book is crazy. And it’s above average crazy, even for Hellblazer. A homeless spirit that just wants someone to hold it during a cold dark winter comes searching for John Constantine. Normally I don’t like Gaiman’s writing, (It’s always a story about people telling stories. Seriously, read anything he’s written. ANYTHING) but this is basically the one exception. It’s a fantastic one-shot of a story that I wish was easier to find. It’s definitely entertainment. More info can be found HERE

Hellblazer has been around for over 200 issues, and has no intention of stopping (Has it passed 250 yet? I think so). After the DC relaunch, Constantine moves into the DC universe, but the Vertigo book will continue. In addition to Hellblazer, look for him in Justice League Dark, and maybe the Swamp Thing book.

And that’s it! I have Battlestar Galactica to watch, so I’m busy!

This entry was posted in Reviews and tagged Aquaman, Batman, Hellblazer. Bookmark the permalink.