The Latest and (Mostly) Greatest #27

This was a pretty good week folks, full of hits and misses all over the place. So let us reel some of these out and judge them accordingly! 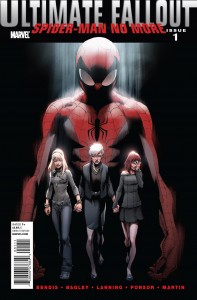 The Ultimate Universe has its fair share of problems, but every once in a while Bendis can write a sick comic, and that’s the case here. Everyone has their own character moment of reacting to the new Spider-Man; things get shaken up and “nothing will ever be the same.” But in this case it’s actually true, because they don’t have to worry about status quo. On the other hand, Millar deals with a whole different set of demons, in that he is forced to shoehorn the Spider-Man stuff into his story.  His entire Ultimate Avengers run has been pretty disappointing, and it makes me just want to go back and read Ultimates 1 & 2 instead. 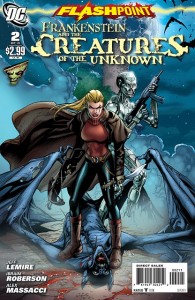 Frankenstein and the Creatures of the Unknown #2 Writer: Jeff Lemire Artist: Ibraim Roberson

Your batch of Flashpoint minis for the week, ranked in order from best to worst. Frankenstein is just bizarre enough to work, mixing all the fantasy elements it can to create something pretty sweet. It makes me look forward to what Lemire might do on the actual Frankenstein series. Cold provides a weird twist on the allegiances of the Rogues, and it’s the ideal piece for someone like Kolins, who has been working with these characters for years. Deathstroke provides your fair share of uber-violence, but the point of it is just completely lost on me. It kinda ties into Aquaman, but not really.  As for Aquaman, it’s just a generic boring info-dump. Some good, some bad, but it all kinda depends on which characters you’re interested in.

Francavilla is one of the best artists that either of the big two currently employs.  His stuff is just so beyond excellent there almost aren’t words for it. It doesn’t hurt that Liss is telling a crazy story involving the hate-monger. This is a Fear Itself tie-in, but very much in the loosest sense of the word. It’s the kinda story that only works in comics. It honestly has a guy in a giant pink hood yelling at a black guy for being an immigrant in this country? How could anyone else possibly get away with that plot thread? Add to that the super-soldier American Panther starting the fight, and the extra Foggy Nelson angle, and you’ve got one of the more complex Marvel titles available. Now if you would just buy it… 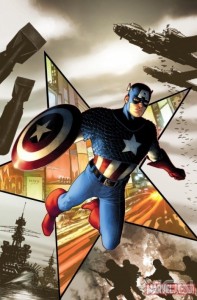 It’s. Just. So. Pretty. Sorry folks, but McNiven participated in Old Man Logan, so he can do no wrong. We all know this will probably run into delays, but that’s not even remotely a big deal to me. I completely trust Brubaker to write a solid story that will keep me interested and not be bogged down by the event continuity (I’ll pretend like he didn’t participate in House of M or Civil War). This issue is no exception. It’s beautiful to look at and so well-written that it leaves you wanting more. Not to mention a Baron Zemo appearance, which, much like Batroc, means of course I’m going to keep buying it. I’m a sucker, but I know what I like. Don’t judge me. 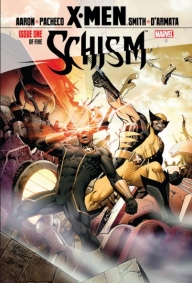 I was surprised at how much I enjoyed this. I can’t think of a time that Aaron has written an X-men comic (aside from some Wolverine), but he already has a pretty good grip on the characters. Not to mention that he brings back some characters from Grant Morrison’s X-men run, and you know I’m a sucker for some Morrison. We know this is all set-up for the breaking up of the team into Wolverine’s crew and Cyclops’s crew, but that’s not a big deal. This book is definitely more about the journey itself and not the actual destination.  For now the journey is extremely interesting, and we’ll see if it can keep up for four more months.

This, on the other hand, feels like it’s gone a bit off the rails. Taking a break from the overall story, Hickman explains the sudden appearance of Black Bolt as the cliffhanger of the last issue. The only problem is, no one really cares.  It’s not put ahead as a big deal, it’s

boring and not even fun to look at. Epting was supposed to be the artist on this series, and he’s already been bailing. I should trust Hickman because of his run on Secret Warriors, but this is coming across more like his indie work, where there are big ideas and no real pay off. Very unfortunate.

My review will be as quick to read as the comic itself. Very pretty to look at. More Tesla. Girl whose name I can’t remember. Plot thickens, see you again in October. Too quick a read for the months of waiting.

And that’s it! I’ll be back with more of the old stuff later this weekend.