The Latest and (Mostly) Greatest #20!

It’s been twenty of these; have I become any better?  Read on to find out! 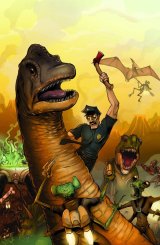 Written by a six-year-old and drawn by his thirty-year-old brother!  This comic is just as ridiculously rad as you think it would be.  There is literally, vikings fighting baseball players (a much more even fight than you’d think),  The people of the Uni-Smart World had their unicorn horns covered so they no longer had “magic unicorn powers.”  Originally a webcomic, this has translated almost perfectly to the comics form.  It’s very clearly written by a six-year-old, but a surprisingly smart one.  His ideas are all there, but still maintain the innocence of childhood.  Seriously, this comic is just pure unfiltered comedy goodness mixed in with dinosaurs, axes, cops, socks, and more! 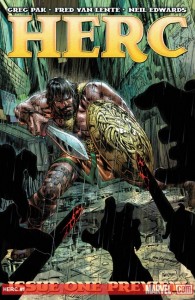 So Hercules has lost his powers and now has to find a way to survive in the real world.  To do that, he of course starts fighting the new Hobgoblin and attacking random hooligans.  The strange thing about this is that it totally works.  Herc uses a bunch of different items from Greek folklore.  And the presentation of it all works.  Every time he uses something, a new banner comes across the bottom of the page explaining the real Greek mythology behind it.  To put it simply, it’s a pretty rad first issue.  It’s the kind that has enough action to be good on its own, but also makes me want to come back for more.  Very good stuff. 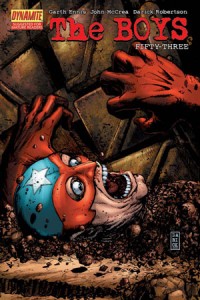 This is still not as good without Darick Robertson doing the art.  Just look at that cover!  However, it’s still one of the best comics that the market has to offer.  And it’s Ennis doing war stories.  If you’ve ever read his war comics, you know the guy loves it.  Battlefields, War Stories, and several Punisher stories have all been in the war.  He knows what he’s doing, just like with this comic.  I have to say that I’m really enjoying this concept.  With all the heroes being introduced in WWII, flashy costumes and all, how could they possibly survive (spoiler: they don’t).  It’s a fun and interesting story, much like every month that this title comes out.

The main draw for some people was the Staples art, but I’m completely unfamiliar with her work, so I can’t comment on the quality vs. other stuff, but it is very nice to look at.  What worked the most for me though, was the story.  Jonah Hex is having to deal with a crazy snow-filled town.  This leads to some serious cannibalization and just some spooky stuff.  Staples art works well with the snow setting, sometimes coming off similar to Frazer Irving or diving into traditional comic art.  I actually really enjoyed this comic, and am intrigued by what else she may have done.  Anybody know anything?

If all comics priced at $3.99 took this long to read and were this size, the price change would be completely worth it.  Fraction writes the hell out of this story, working with a ton of different plot points and putting them all together into an enjoyable story.  It was a very strange script that put everything into place and makes me want to keep reading.  This could easily turn out to be a sleeper hit for Marvel, and I’m hoping it can actually be a solid event story that really works out well for the company.  Buy the first issue people; it’s the least you can do!

Wolverine: The Best There Is #5 Writer: Charlie Huston Artist: Juan Jose Ryp: Still weird, still fun, and should still be a MAX book.  Interesting take on Wolverine, kinda in the same vein of weird as DeadpoolMAX.

Sweet Tooth #20 Writer/Artist: Jeff Lemire: Still wickedly awesome, still the best Vertigo book, everything stands from the last time I talked about it.

Brightest Day #23 Writers: Geoff Johns and Peter Tomasi Artist: Ivan Reis, Joe Prado and more: Big spoiler!  Alec Holland shows back up and it’s a big Swamp Thing story.  The only word I can use to describe it is… weird.  We’ll see.

iZombie #11 Writer: Chris Roberson Artist: Gilbert Hernandez: A special one shot issue with a Hernandez brother on art.  What’s not to like?  A good pick-up for people who’ve never read the series.

House of Mystery #36 Writer: Matthew Sturges Artist: Juca Rossi, and Darwyn Cooke: Worth noting ’cause of Darwyn Cooke.  That’s all I read, so that’s what you need to know.

Chew #18 Writer: John Layman Artist: Rob Guillory: Still a shockingly good story, and based on the concept it shouldn’t be that good.  But it is, it really, really is.

Ultimate Captain America #4 Writer: Jason Aaron Artist: Ron Garney: The series comes to an end, and it’s… ok?  I’m not sure how I feel about the whole thing.  It’s worth reading, but I dunno…

Howard Porter is already off on art.  Let’s be clear here.  I’m not a fan of Porter, but if you hype it like it’s some big thing, why is he bailing after 4 issues.  I’m very disappointed in this series overall, and it’s a waste of the bi-weekly format.

And that’s it!  See you later this week folks!

One Response to The Latest and (Mostly) Greatest #20!