The Latest and (Mostly) Greatest #1 By Dan!

Hey folks! With the new website running smoothly, we’ve decided to change things up just a little bit.  Reviews will now only be one post per week, but The Professor and I will both have a different column on Sundays!  So get ready for some slight changes.  Also, make sure to wear a helmet, in case I blow your mind!

My Top Five (The five best comics of the week) 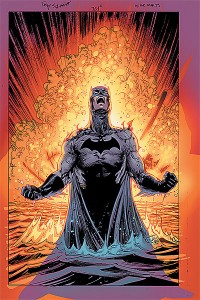 Morrison’s Batman run has been one of the crazier things of the past couple years, which is no big surprise.  Here he has decided to bridge the gap between his R.I.P. story and Final Crisis.  That means a reunion with his R.I.P. artist Daniel for an “untold tale”.  So what do we get?  More craziness and confusing plot of course!  If you want more R.I.P. style and expect to not understand all of it, then this is definitely a book for you.  Daniel is definitely not the best artist that Morrison has worked with, but the consistency of having him do a huge chunk of the run doesn’t hurt at all.  Most definitely worth buying. 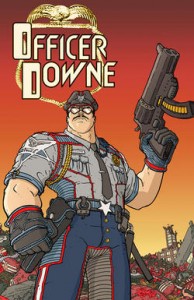 I am such a sucker for artists that draw like Geof Darrow.  This is a one-shot (I think) about a constantly revived super-cop fighting against the wicked in the near future.  I find myself saying “I think” several times because it such a bizarre little book.  It screams of an influence from the Miller-Darrow book Hard Boiled and that’s not a bad thing for anyone involved.  Don’t be surprised with the appearance of some ultra-violence and language, this is clearly an adults book.  For $4.99, this book has no ads, several  test sketches and interviews, and is most definitely worth checking out. 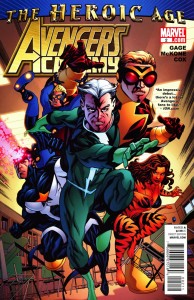 Do you remember Matt Fraction’s book, The Order? It was all about a new wave of recruits trying to fit in with the new regime and not quite being able to handle being heroes.  Well it was really really good, and Avengers Academy screams of being it’s likely successor.  The different narrator focus every issue, the trials of being new to the job, and the influence of several Marvel mainstays make this a book to watch for.  It has a bunch of layers and ton of potential.  This could be the sleeper hit of the year, or gone well before it’s time just like The Order.  So buy it, or I’ll blame all of you if it gets cancelled.

Dumb comics do not make bad comics, and this book definitely proves that rule.  The death of Comic Book Guy begins in this issue, and it’s just as doofy as you would expect.  But it’s also pretty hilarious, using all the stereotypes about comic people we know and love, mixing in the usual Simpsons humor.  Simpsons comics always seem the same, pretty funny, but nothing worth talking about.  This one caught me by surprise by being very above the average.  A fun book with a lot of potential.  And Stan Lee shows up next issue! (I’m not sure if that’s good or bad, but you’ve been warned…)

A $2 preview of the next Parker book adapted by Darwyn Cooke.  It’s oversized, and it’s awesome.  I hope this is just a prelude and not actually in the book, but nonetheless, it’s an amazing reminder of how much Cooke loves working with this material.  No book til October, but this is a good taste of what’s to come.

Bulletproof Coffin #2 (of 6) Writer: David Hine Artist: Shaky Kane: Just as crazy as the first issue, which means just as good.  The comic-in-comic idea still works, and I want to see where this goes.

Superman #701 Writer: J. Michael Straczynski Artist: Eddy Barrows: Walkin’ around Forrest Gump style still has potential, but I’m very “meh” on this overall.  Talk to me in a couple months and I’ll have a real opinion, I swear…

Doctor Solar #1 Writer: Jim Shooter Artist: Dennis Calero: Worth noting for Shooter’s return to an old character, but it didn’t really resonate with me.  Definitely for fans of the old Valiant stuff.

Invincible Iron Man #28 Writer: Matt Fraction Artist: Salvador Larroca: A slight dip in quality post “Most wanted”, but I fully expect it to ramp up at any second.  Still a fun read month in and month out.

Justice League Generation Lost #5 Writers: Judd Winick and Keith Giffen Artist: Aaron Lopresti: Still a very interesting concept.  Five issues for team gathering doesn’t seem as slow on a bi-weekly book, and I want to know where this is going.

Amazing Spider-man #637 Writer: Joe Kelly Artist: Four guys: A little disappointed Lark didn’t do this all himself, but I’ll settle cause it’s still really good. A logical wrap up to the Kraven story, and I still want to know what’s next.

Ultimate Spider-Man #13 Writer: Brian Michael Bendis Artist: David LaFuente: This issue would have been better, if a Chameleon story from Amazing Spider-Man hadn’t been essentially the same thing a couple months ago…

X-Force Sex and Violence #1 Writer: Craig Kyle and Christopher Yost Artist: Gabrielle Dell’otto: The title doesn’t quite lie, there is both sex and violence.  Worth noting for fans of Dell’otto, also worth noting cause this X-force team doesn’t exist anymore…

X-men Second Coming #2 Writer/Artist: Various: The epilogue of the big event sees everybody getting into their new status quo.  Interesting stuff with some potential, we’ll have to see what’s next.

You wanna watch your favorite Marvel heroes talk in Hulk-speak and then have random flashbacks?  Well then this is the book for you.  I can’t even tell you what’s supposed to be going on in these books, but it most definitely is not working.

I absolutely love Scott Kolins art.  Don’t ask me why, it’s just something I’m a fan of.  Which makes me wonder why this book is so terrible.  I think it’s been pretty well established that Magog doesn’t work as a character to star in his own book, and even Kolins, who is clearly trying his hardest, can’t save this book for me.  It’s soon to be cancelled anyway, so keep buying it to see the train wreck.

Did ya like that?  Any comments/questions/concerns on the new style?  Feel free to leave a comment, or just bug me when I’m in the Store!