So here’s my second entry of the week.  In “Fresh Eyes On An Old Book” I’ll take a look at some Silver Age books, let you know what’s going on in ’em, and what I think.  Let’s do this! 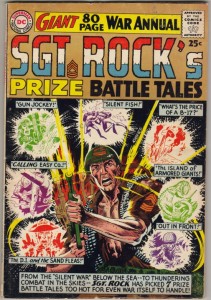 So I’ve never been a huge fan of army books, but I’m willing to take the dive just to fill you guys in on what you need to know.  This 80 page giant is a serious rarity being the only Sgt. Rock or army book to have an 80 page giant (all the other are for the superheroes).  The Joe Kubert cover explains just about everything you are going to get in this issue.  Guns, violence, war, and maybe a couple lessons thrown into this book.  At 80 pages, there’s a lot to read here, but as is often the case, you’re given 6 or 7 stories to read.  This is some of Joe Kubert’s best work, as he was in his prime and working with one of his favorite characters.  Also, Russ Heath does a story that looks just as good, and there’s a spread of all the DC war heroes that is excellent.  This is the perfect book for any war comic fan.  More info can be found HERE.

Aside from this one-shot, Sgt. Rock has appeared in Our Army at War which turned into a self titled series.  Most recently, Billy Tucci had a mini-series starring Rock, and Kubert returned with a Rock story for Wednesday Comics 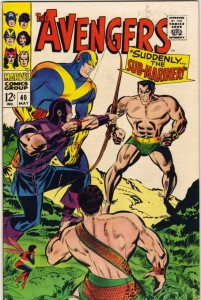 What always interested me about the original Avengers is how the power house characters (Thor and Iron Man) bailed really early on in the series.  That left a substantial hole to fill, so tons of characters have come in to be part of those roles.  Even Captain America isn’t really in this issue, dealing with his problems with the Red Skull in Tales of Suspense. That leaves Hawkeye, Scarlet Witch, Goliath, Wasp, Quiksilver and Hercules in the hands of Roy Thomas’s writing.  With a cameo by Sub-Mariner and a lot of cosmic cube related activities there is plenty covered in this single issue.  It’s not the greatest comic ever, and the Don Heck art is a little strange to say the least, but I found myself actually taking the time to read and look at everything in this book, so that’s definitely a good thing. More info can be found HERE.

The first Avengers title ended after around 500 issues, and has had a lot of shake-ups recently. Several of the characters found in this issue are currently dead in comics.  To read more about some of these characters check out Avengers, New Avengers, Secret Avengers, and Avengers Academy. 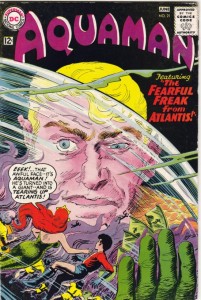 I can’t for the life of me figure out who wrote this, but they deserve a medal.  In this issue Aquaman gets some kinda growth hormone, fights a giant jellyfish, gets caught by an evil fisherman, shrinks down to a “pygmy” size then grows back just in time to beat up the evil fishing guy.  If that’s not great storytelling, I don’t know what is.  It’s impossible to do an Aquaman story seriously anymore, and reading this makes me wonder if it was ever possible.  Nick Cardy supplies the super clean art that he always has (inking himself must help), and this is just such a bizarre story that it’s pretty much amazing.  Seriously, Aquaman fights a giant clear jellyfish to defend Atlantis, what’s not to love?  More info can be found HERE.

This Aquaman series lasted 63 issues.  After a long absence (due to his “death”) Aquaman reappeared in Blackest Night.  Post-Blackest Night, Aquaman is currently one piece of the Brightest Day ongoing series.

And that’s my opinion!  Don’t forget to comment, cause it makes me feel special!