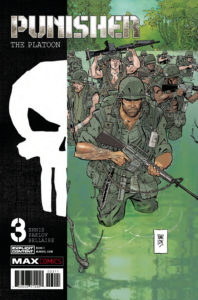 A couple of double shots from good writers this week, one classic and one new: Garth Ennis is the “classic” one, since he’s been writing comics since the early ’90s; he’s best known for Preacher, but his early- to mid-’00s Punisher run with Goran Parlov was the best that character has ever been, and their return on the early-Vietnam-War-set 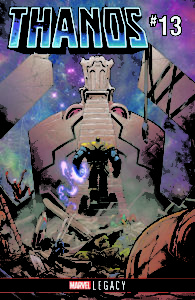 Punisher: Platoon continues to be a taut, very well-constructed and well-told example of war comics at their finest. War Stories doesn’t have the advantage of  a well-known character (or Parlov’s precise, clear art), but it mines similar ground; it’s got Ennis’s fondness for tales about the British RAF in WWII, and his Irishman’s understanding of the flawed humanity and matter-of-fact heroism of those men and women, leavened with an historian’s command of the small and large details of that now-long-ago time. Donny Cates, who burst on the scene just a year ago with a series of well- 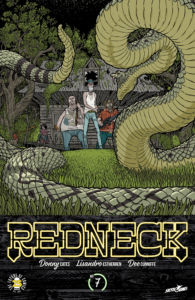 written and imaginative genre books from Image, is the “new” writer; Thanos #13 is his first effort on that title, and he immediately grasps the key problem of a comic about a villain — how do you write stories about a character who can’t ever really “win,” because he’s a bad guy? — and finesses it neatly (to say more would involve spoilers), aided by Geoff Shaw’s sweeping, suitably-cosmic art. Redneck is the second arc of Cates’s most well-received Image title, about a group of Texas good ol’ boys who just happen to also be vampires; it’s got the gritty setting, strong characterization and, in this issue especially, startling plot twists that indicate that Cates should have a long and successful career. 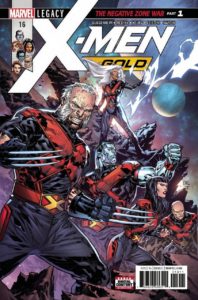 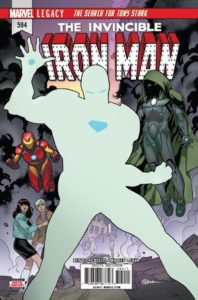 X-Men: Gold offers the Legacy-fueled start of a new arc, and continues to be a retro-’80s take on the team, with Kitty and Peter back together, Nightcrawler, Storm and Wolverine (the old one) interacting, anti-mutant hysteria rising, and a story that will launch the team into space (negative-space, apparently, since the title is “The Negative Zone War”); so far, the familiar characters and situations have made this book into at least a mild hit, and this is a good jumping-on point for curious readers. Iron Man

continues to ease Tony Stark back into the spotlight, as everyone’s looking for him (although he doesn’t technically show up here…), while Mary Jane, Riri and Amanda deal with a Stark Industries board-of-directors mutiny, and Doctor Doom, in his Iron Man outfit, gets payback from all those super-villains who just busted out of prison (most of that part’s drawn by Alex Maleev, continuing his stint on Iron Doom from Infamous Iron Man); there are a lot of entertaining moving parts here, and it’ll be interesting to see how it all resolves, as Bendis, the writer, will be stepping down in a few months to go to DC, and all those dangling plot lines will have to be tidied up for whoever’s on the new creative team. Black Panther delves into the secret history of Wakanda, as the country’s under siege by both mystical 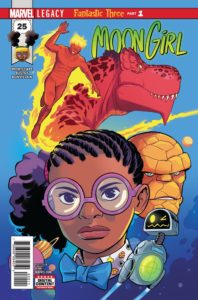 forces and old nemesis Klaw, and T’Challa’s gathering allies; Ta-Nehisi Coates has settled into a smooth blend of action, characterization, continuity and political intrigue that create an easy-to-like ongoing story.  Moon Girl, down a partner with Devil Dinosaur temporarily out of the picture, ends up with Ben Grimm and Johnny Storm (who are down two partners themselves, and are used to working around someone really smart); a number of familiar guest stars show up, and there are lots of callbacks to FF continuity (including a couple of sly references to the FF’s current unpublished situation), so old fans who miss Marvel’s original “World’s Greatest Comic Magazine” should have fun with it. 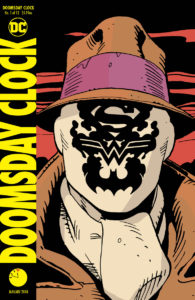 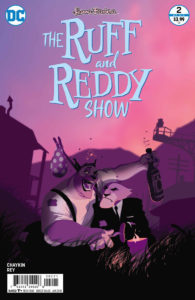 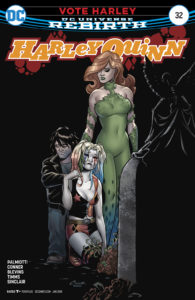 Doomsday Clock isn’t subtle about its connections to the original Watchmen: it starts on that world, a few months after the end of the original series, with someone in a Rorschach costume (we find out quickly it isn’t the original) breaking two people out of prison for a mysterious (but soon-revealed) partner; the original Rorschach’s journals have been published, leading to the collapse of Ozymandias’s grand bring-the-world together 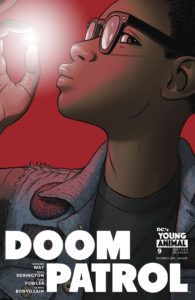 schemes, and now the planet’s facing imminent nuclear war that can only, maybe, be resolved if they find Dr. Manhattan. Everything, from the book’s trade dress and nine-panel grid to Gary Frank’s art (he has much the same abilities at solid panel composition and attractive figure drawing as Dave Gibbons) evokes the source — except for, at the end, the connection to the main DC universe — and this is, against all odds, an intriguing start to a much-anticipated event.  Ruff and Reddy continues its reluctant reunion of two old-school TV-cartoon partners (it’s set in a Roger Rabbit-like world where animated and human characters co-exist) who 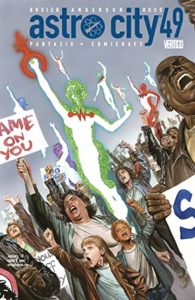 broke up bitterly years ago and have fallen on bad times; the Howard Chaykin script is knowing and appropriately cynical about the show-biz aspects, and Mac Rey’s art blends the human and cartoony well, although its computer-generated repetition sometimes gets bothersome. Harley Quinn sees its semi-heroine getting bloody, inevitable revenge for the death of her boyfriend at the hands of the corrupt mayor and his staff; it’s Palmiotti’s and Connors’s swan-song story, since they’ll be leaving the book with its conclusion, so tune in for just a few more issues to appreciate their work. Doom Patrol, having established its team and (mostly) gotten the band back together in its

initial arc, now gets very Grant Morrison-y, both bringing back and updating one of his old villains, while giving the team plenty of surreal conspiracies to deal with. Astro City has regular artist Brent Anderson back, for one of those one-shot tales about the human side of superheroing (this one about a father/daughter relationship) that series creator Kurt Busiek does so well. That leaves Kamandi Challenge, which is on the list, not because of its writing or plot (round-robin tag-team stories like this seldom have satisfying resolutions) but because the artist is Walt Simonson, who’s at the stage of his career where pretty much everything he does is a gift, and worth our appreciation. 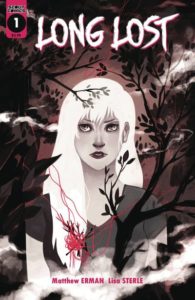 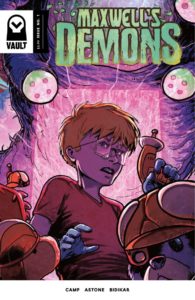 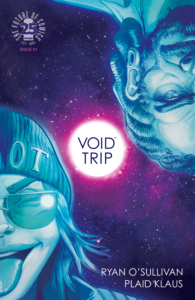 Of the new indy first issues, Long Lost sneaks up on you by looking like an Americanized-manga (or manga-ized American)-style slice-of-life comic, but then revealing itself as a horror book instead, dealing with the toxic effects of 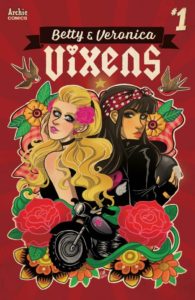 grief; as the best books like this do, it gets under your skin. Maxwell’s Demons is about a kid genius with an abusive father whose inventions puts him into contact with benevolent aliens; that’s a standard set of tropes, but it turns out that this is a cleverer book than you think, and that nothing is quite as simple as it seems. Points for that, and for telling a full story in its first issue, instead of merely the first chapter of some long, involved origin. Void Trip is about a duo of con-artists/space 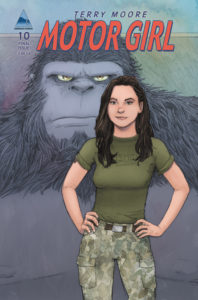 hippies who are on the run from various aliens; this first issue does some character- and world-building and sets up the bones of the plot, and it’s good at making the pair both roguish and interesting enough to keep reading about. Betty and Veronica: Vixens starts out being about those two Archie characters as kick-ass leaders of an all-girl motorcycle gang, and then backs up to show us how they got there; it’s by an all-woman creative team, and, as the cover indicates, has a feisty semi-undergraound feel to it that’s a refreshing take on its longtime frenemies and 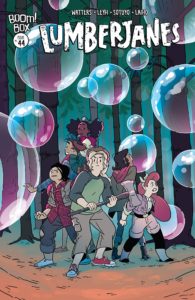 romantic rivals. Motor Girl concludes its story (Moore is restarting his first, most-remembered series, Strangers in Paradise, next year) abruptly but logically, with all the narrative pieces falling into place and its affecting tale of a damaged Iraqi-war vet giving her a conclusion that’s equal parts poignant and satisfying. Lumberjanes concludes its own recent arc, too, but it isn’t going anywhere — its themes of friendship, family, responsibility and love (mixed with healthy doses of action, mythology and magical realism) should be able to take it well past this 44th issue, to #100 and beyond, and the comics universe continues to be better for it.

With 40 years of experience in comic reading, collecting and reviewing, English Professor Phil Mateer has an encyclopedic mind for comics. Feel free to ask Phil about storylines, characters, artists or for that matter, any comic book trivia. He will post your questions and answers on the AABC blog. His knowledge is unparalleled! He is also our warehouse manager, so if you are looking for that hard to find comic book, ask Phil!
View all posts by Phil →
This entry was posted in New Comics, Reviews and tagged Astro City, Black Panther, Doom Patrol, Doomsday Clock, Harley Quinn, Iron Man, Kamandi, Long Lost, Lumberjanes, Maxwell's Demons, Moon Girl, Motor Girl, Punisher, Redneck, Ruff and Ready, Thanos, Void Trip, War Stories, X-men. Bookmark the permalink.