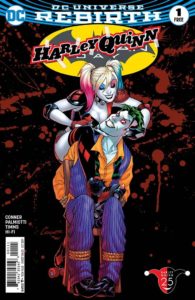 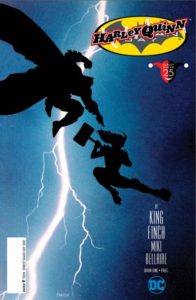 So, you may have heard, it’s Batman Day today (assuming you’re reading this on Saturday morning, when it’s published, and not later…), and DC apparently knows it, 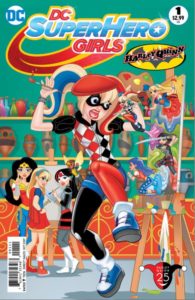 because they published lots of Bat-stuff this week. Their hook for the three different freebies this year is that Harley Quinn (who’s, of course, pretty high-profile in her own right) has hijacked the day for herself; hence, the Harley Quinn Day Special Edition, which is actually the first chapter of the “Joker Loves Harley” serial that ran through issues 11-13 of her own comic and is, by an amazing coincidence, the subject of a just-published graphic-novel collection. It’s got the Joker coming back into Harley’s life, and ends up going off in a much different direction than this first chapter might indicate — but in a good way; Connor and Palmiotti know exactly who their sometimes-heroic, NYC-bred main character is, and how to make her confident and loyal and assertive instead of merely 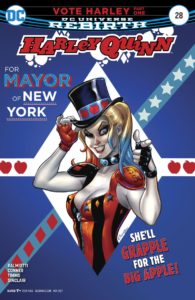 psychopathic, and it’s no accident that they write almost all of her many adventures and spinoffs. That includes the framing sequence for the actual Batman Day Special, which, again, reprints the first chapter of a just-collected serial, this one the Tom King/Dave Finch “I Am Bane” from Batman #16-20; Bane comes to Gotham and lots of intimidating and punching (well-told intimidating and punching, but that doesn’t stop Harley from making fun of it in the extra pages) ensue. The other giveaway is pitched at younger readers: the DC Superhero Girls Batman Day Special Edition has cartoony teen versions of Harley, Supergirl, Wonder Woman, Katana and others at  “Super-Hero High,” the subject of a number of original graphic novels that sell well in the scholastic markets, and, as you might suspect by now, 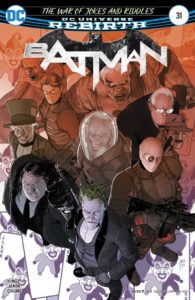 offers the first chapter of one of them. It’s got the bright, basic character designs of a TV cartoon like New Teen Titans, and any comics fans who like shows like that will probably like this, too. Harley has an issue of her regular, non-free comic out this week also, #28, which kicks off a “Harley For Mayor” arc, the NYC major in Harley’s world being a corrupt killer; if you like the free “Joker Loves Harley” sample, this is by the same team, and is just as appealing.  Batman’s own regular book has the penultimate chapter of the “Joker/Riddler War,” and it’s not bad as a stand-alone sampler, too, with some nice art from Mikel Janin, both on the character 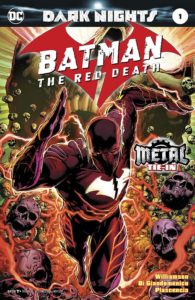 close-ups and on the one double-page splash where King gives him a chance to impress us, and he does (Kite-Man!) .  Batman: The Red Death is the first of a bunch of Dark Nights: Metal one-shots spotlighting the bad guys. This one’s a Flash/Batman hybrid from a pre-Crisis earth where that Batman dealt with the death of his sidekicks by absorbing the Speed Force from Barry (and Berry’s presence right along with it) and turning into armored spirit of vengeance BatFlash;  if your inner twelve-year-old thought that any part of that sounded cool, it’ll probably like the actually-pretty-decent enhanced cover, and the $3.99 price, too. 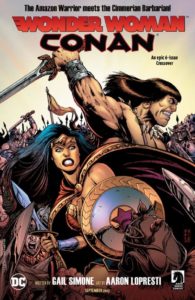 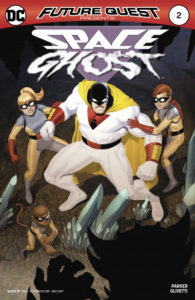 Wonder Woman/Conan works because of Gail Simone, one of the few writers capable of writing both warriors effectively, and of turning Diana’s presence in the Hyborian 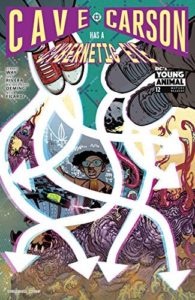 Age into both a mystery and a romance; Aaron Lopresti’s art handles the two principles well, making them both seem real (and without falling into the trap of turning Wonder Woman into a Red Sonya clone).  Space Ghost has a serviceable script from Jeff Parker, who sets up a solid framework and then wisely gets out of the way, to let Ariel Olivetti’s painterly, glowingly-colored cartoons shine. Cave Carson ends its first season in triumph, with kick- 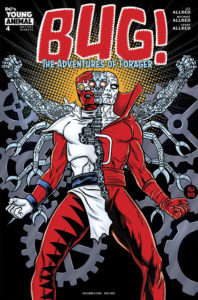 ass action and resolution, loose ends looped neatly back into the main story and everything in place for new adventures; Oemings’s art is just as gonzo as Rivera and Way’s story, and this whole first-dozen-issue story ought to make a killer plus-sized trade edition. Bug! has some of Cave Carson‘s anything-goes thrill,  both because of Michael Allred’s similarly-ideosyncratic art and because of brother Lee’s continuing fascination with 1970s DC deep dives like Manhunter, Deadman and the Simon-and-Kirby Sandman; they combine to make this a shiny, hipster romp. 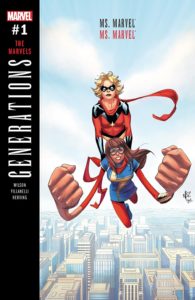 Generations: Ms. Marvel sees Kamala going back in time to encounter Carol Danvers in her late-’70s Ms. Marvel incarnation; because it’s by G. Willow Wilson, her regular writer, it’s smart and perceptive about both women, with 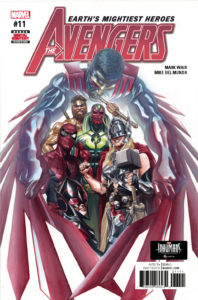 nods to ’70s gender attitudes (and prices), and Villanelli’s art manages to triangulate Carol’s original Sal Buscema house style with Kamala’s more manga-influenced modern one; readers of the current Ms. Marvel series should find this an entertaining addition to the canon. Avengers is a breather issue — establishing the team’s status quo post-Secret Empire, with Sam as the Falcon now, but still leader, and having some doubts about it. There’s a nod to events in Spider-Man’s title, too, as Peter Parker Industries has gone mostly belly-up, so the group’s Baxter Building headquarters is no longer available. Lots of characterization and often-humorous interaction (which is the advantage of breather issues …), especially between Spidey and the new Wasp, and Mike del Mundo’s Day-Glo 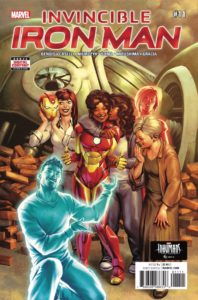 coloring and expressionistic art make it all look fun and inviting.  Invincible Iron Man offers something of a breather issue, too, as Riri talks with Tony’s mom, Mary Jane and the AI Friday, and we hear about some of their previous encounters with Stark; we see how he spent some of his free time, too, and Bendis has an affecting essay on the letters page where he hooks that part up to his own experiences. It’s a breezy, character-rich interlude, and a setup for next issue’s Legacy renumbering, and the beginning of the “Search for Tony Stark” story that promises to take the book back to its more-classic roots (although I’ve been enjoying Riri’s tenure enough to hope that she continues to be the focus, and remain a major part of the cast, for quite a while too…). 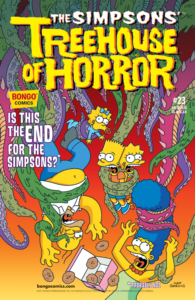 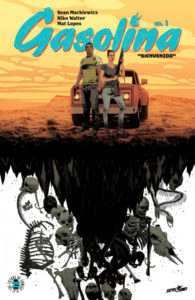 It’s fall, so the Simpsons’ annual Hallowe’en special, Treehouse of Terror, is out again (23 years and counting!), and it’s the usual buffet of great horror parodies and pastiches: a full-length, timely It takeoff (with young versions of Homer, Marge, Barney, etc., and with the clown played by, obviously, Krusty) written by Ian Boothby and 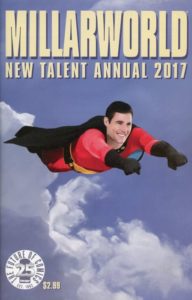 with art by Tone Rodriguez and Andrew Pepoy; a tale about an alien fungus that looks just like Marge’s hair, which replicates quickly and ends up on everyone’s heads, written and drawn by Carol Lay; and a “Comic Book Guy gets cursed by the crazy Cat Lady” tale written and drawn by Dean Rankine. All of them offer the high level of animation-style humor that’s been the hallmark of this comic for decades, and are well worth the $4.99 cover price. Gasolina is a suspense/horror series that’s set in Mexico, where an American couple with a shady past (the locals call him “the doctor” and her “the assassin”) are working quietly on a farm, until the owner’s son is kidnapped by a death-worshipping drug cartel for 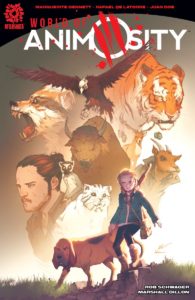 ransom; he gets rescued, but then the plot turns more Alien than Narcos.  That’s an intriguing mashup, and the good-looking art, detailed and realistic, helps make it feel like the kind of energetic B movie that you’d come across on late-night cable. Millarworld New Talent Annual features brand-new creators who won this year’s Mark Millar-led talent search, producing four- and five-page stories involving Millar creations: Kick-Ass, Empress, Nemesis, Superior, Super Crooks and Huck. Nothing here is blow-your-socks-off good, but much of it shows potential, and proceeds from the book go to the Hero Initiative charity, so, you might as well get it — if any of those writers or artists ever hits it big, this first appearance of their work will more than pay for itself. World of Animosity is a who’s 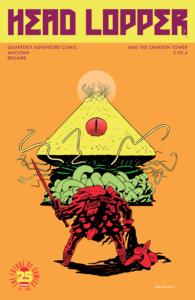 who/guidebook to Marguerite Bennett and Rafael de Latorre’s series about a world where all the animals, from mosquitoes to whales, “Wake” one day and are able to think and speak — and, for many of them, take revenge. It’s a silly premise, but, once past that, it’s worked out with skill and smarts and a lot of world-building; this book illustrates that with character profiles, plot summaries, maps, country-by-country breakdowns and other features, so if you’re already a fan, or want a one-stop summary of what’s gone on up to now, it’s a good buy. Head Lopper continues the second arc of its adventures of a massive, white-bearded barbarian warrior fighting in an ancient land of magic, monsters and interdimensional portals: it’s Conan as filtered through Moebius, or 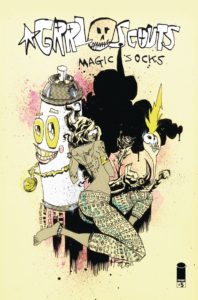 maybe Brandon Graham, and it’s high-energy action, sometimes straight and sometimes tongue-in-cheek, delivered in Andrew Maclean’s unique style. Jim Mahfood’s unique, too — his Grrl Scouts features one of the title trio dead, but mentored in the underworld by a spirit guide who’s Hunter S. Thompson, while the other two fight over extremely powerful magical footwear with a psychotic preteen and her social-media-fueled army. If that’s not enough, Mahfood’s a former Tempe resident — in the early ’00s,  his cartoons were appearing in New Times and other Valley counter-cultural hot spots — and his sketchy, undergroundish art has only gotten more confident with age: he really does deserve a look.

With 40 years of experience in comic reading, collecting and reviewing, English Professor Phil Mateer has an encyclopedic mind for comics. Feel free to ask Phil about storylines, characters, artists or for that matter, any comic book trivia. He will post your questions and answers on the AABC blog. His knowledge is unparalleled! He is also our warehouse manager, so if you are looking for that hard to find comic book, ask Phil!
View all posts by Phil →
This entry was posted in New Comics, Reviews and tagged Animosity, Avengers, Batman, Batman Day, Bug, Cave Carson, Conan, Gasolina, Grrl Scouts, Harley Quinn, Head Lopper, Iron Man, Ms. Marvel, Simpsons, Space Ghost, Treehouse of Terror, Wonder Woman. Bookmark the permalink.