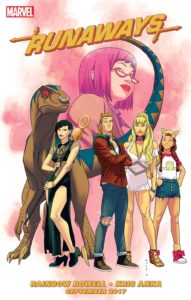 Runaways was an early hit for Brian K. Vaughan (and artist Adrian Alphona) about fifteen years ago; its mix of super-teen angst (the various kids are linked when they discover their parents all belong to an Illuminati-like super-villain group), and YA hormonal relationships was a critical and, for a while, commercial success. This revival’s writer, Rainbow Rowell, has published a number of successful YA novels herself in the last five years;  she brings sharp plotting and characterization skills, along with a fan’s love for all of the book’s main players. Kris Anka and Matthew Wilson 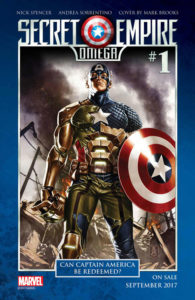 give the art that sleek, colorful, slightly-simplified style that’s become a signature of Marvel’s more energetic newer stuff, and if you liked this book at its height, you should be pleased with this newest incarnation.  Secret Empire: Omega is basically Good Cap sneaking into Hydra Cap’s prison and having a hostile philosophical discussion with him; they throw political positions at one another instead of punches. For all that, it’s actually pretty good; Spencer’s been telling the Secret Empire story for the last three years, and taken some grief for it, so this relatively-quiet coda lets him wrap up some loose ends and make a clear, nuanced but ultimately inspiring statement about who’s on the right side, and why. 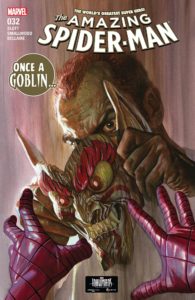 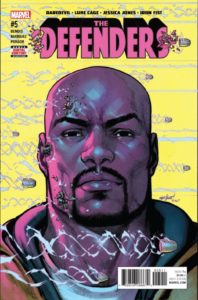 Amazing Spider-Man, as its striking Alex Ross cover indicates, is a Norman Osborn solo story, as the longtime Spider-Man nemesis travels to the Himilayas in search of a way to unlock the Green Goblin power within him, and

stumbles across the same sect as the monks who trained Doctor Strange. It’s a surprisingly-good done-in-one tale, enhanced by Smallwood and Bellaire’s often-stark, sometimes color-splashed. beautiful art.  Defenders continues to be a fun crime-suspense-superpowers mix set up to attract a wide audience; the Night Nurse in this issue, for example, is the comics version but presented in such a way that she’d be familiar to fans of the TV series, too. Marquez has worked with Bendis a lot, and has a solid, 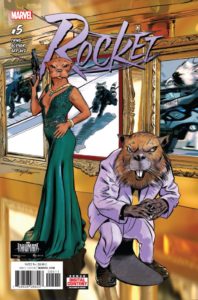 splashy-when-required superhero style like, say, Greg Capullo; he handles the big cast (which includes Diamondback, the Black Cat and even Damien Hellstorm) well, and delivers on the action scenes.  I’m still, inexplicably, liking Gwenpool, as her new zen-like abilities to step outside of the comics page lead to a confrontation with an evil (or maybe just bored) future self, and a number of cool special effects; even Deadpool doesn’t break the fourth wall this creatively, or use meta-knowledge as a super-power as cleverly as Hasting and Gurihiru do here. Rocket‘s clever, too — Al Ewing uses a 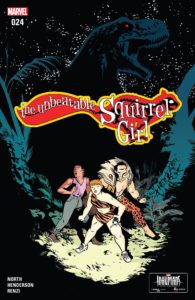 classic hard-boiled first-person narrator, an imaginative split-screen combination of words and pictures, and a well-built plot to present an interstellar heist caper, with Adam Gorham supplying nice-looking anthropomorphic art (check the cover, up to the right there…).  Squirrel Girl continues Doreen’s adventures with a bunch of computer scientists in a damaged and failing Savage Land, menaced by  a metal dinosaur version of Ultron; Henderson’s brisk, deadpan cuteness (even in the action scenes) and the book’s abundant charm keep the chatty dialogue and captions from getting too snarky, and its confident, self-aware style keeps looking suspiciously like the future of comics. 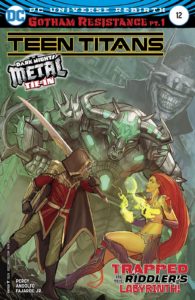 You can’t accuse Dark Nights: Metal of thinking small: between dark-dimension demons, baby Darkseids, the metal Batmanium, and a number of callbacks to past writers (including Grant Morrison’s Bat-run), Snyder offers more cool continuity connections and big-screen events than any fan can resist; mix in Capullo’s art, a solid combination of the shadowy and the superheroic that nails the big scenes, and this might be the best large-scale DC crossover since Blackest Night. It’s got the same potential for tie-ins, too, with this week’s Teen Titans one of the first. Read if after Metal #2, and you’ll see the ramifications of 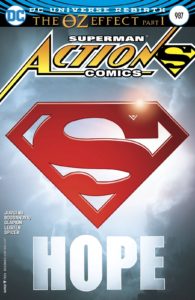 that comic’s conclusion: dark-dimension bat-avatars, many of Justice League members but the one here based on the Joker, battling in a Gotham City that’s been transformed into a maze. Teen Titans mostly just involves Damian — and, instead of the other Titans, who get to stand around outside the action, it guest-stars Harley Quinn and Green Arrow, as that trio try to navigate a deadly labyrinth and face a powered-up Riddler, along with the Dark Bat-Joker; it’s a decent, action-filled tale, and shows how adaptable this event might be to other titles.  Action Comics offers the beginning of its own, Superman-themed event — lenticular cover and all — involving the identity of the mysterious Mr. Oz, who’s been a behind-the-scenes manipulator since the start of the Rebirth era. Since this is only the first episode, readers should be skeptical of the last-page reveal of his 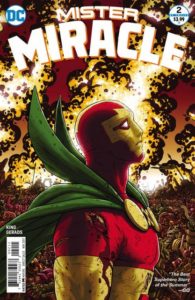 identity (there’s time for at least one or two reversals/feints before this whole thing is over), but it’s certainly an intriguing possibility, and continues the high level of entertainment that both Action and Superman have been providing since their relaunches. Mister Miracle continues its own relaunch, with New Genesis reeling from Highfather’s death, a brooding, dangerous Orion the new leader, battling the hordes of Apocolips on a planet-wide front, and something decidedly off about everyone (it’s no accident that the book name-checks Jack Kirby’s ad copy for the third issue of his original run on the character, with the title “The Paranoid Pill”); Mitch Gerads’ art, detailed and strikingly-colored, is a good match for Tom King’s Watchman-style nine-panel grid, and this is a difficult, twisty, stubbornly downbeat, and, oh yeah, one of the best comics series of the year. That leaves the Harley 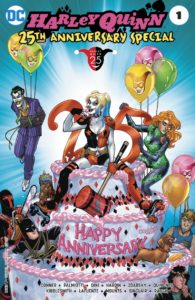 Quinn 25th Anniversary Special, 48 pages celebrating the Maid of Mischief’s debut. The lead story’s by her regular writers, Amanda Conner and Jimmy Palmiotti, with art by Paul Mounts and Dave Sharpe, and guest-stars Catwoman and Poison Ivy; there’s also a story about her days as the Joker’s sidekick by her creator, Paul Dini, with art by Chad Hardin; Harley, Ivy and the Swamp Thing vs. a hurricane threatening NYC, by Daniel Kibblesmith, David LaFuente and John Rauch; another early-days-with-the-Joker tale by Chip Zdarsky and Joe Quinones; and pinups by Babs Tarr, Annie Wu, Greg Tocchini and Kamome Shirahama: for $4.99, more than enough to keep fans happy. 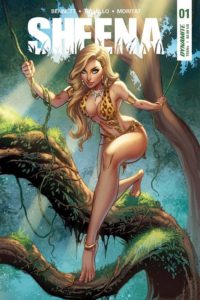 A quartet of first and second issues: Sheena is co-written

by Marguerite Bennett and Christina Trujillo, which helps to avoid the sexploitation that’s endemic to the character (one shudders to think what a publisher like Avatar (Jungle Fantasy) would have done with the property…); there’s still that skimpy costume, but when the artist is Moritat it’s hard to complain, and the story, involving our heroine protecting her unspoiled niche deep in the Amazon from encroaching outsiders, is both smart and entertaining.  Sink is a horror comic set in inner-city Glascow; John Lees mentions being influenced by David Lynch in the extensive editorial material at the end, and the book’s gradual transition from a normal, real-world working-class existence to weird-ass terror makes his influence obvious. Refreshingly, this first issue’s story has a 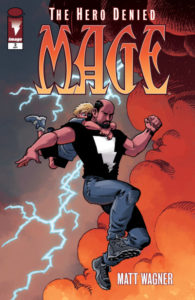 beginning, middle and conclusion (later issues will be set in the same area, but with different protagonists), and between the scary, relatable script and Alex Cormack’s expressive, moody and often-bloody art, it’s definitely worth a look. Mage continues its concluding volume of Matt Wagner’s sometimes-autobiographical, often-fantastical trilogy about a fairly-regular guy who’s also the reincarnation of Arthur Pendragon; he’s married with young kids now, and has been hiding out to raise his family, but of course the forces of evil eventually show up near his doorstep…. Wagner, on the letters page, calls this rousing adventure story with deepwater themes the “purest

example of my skills as a comics creator,” and who are we to argue? Spy Seal continues Rich Tomasso’s totally self-produced (well, it’s published by Image, but he’s the writer, artist, colorist and letterer) series about a neophyte British secret agent in an anthropomorphic world that looks like it was created by Hergé by way of Carl Barks; the European ligne claire style he’s using here is very different from the US underground one that powered She-Wolf, but like its title character Spy Seal, while it seems unassuming at first, turns out to be sleek, smart, muscular and pretty much unstoppable. 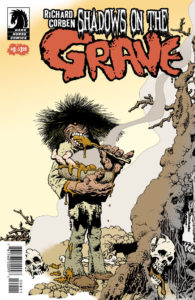 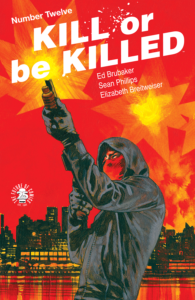 We’re at the part in these reviews where we’re looking at established indy books that I’ve been buying for quite a while, and have already talked about in earlier posts, so let’s be brief: Shadows on the Grave is the final issue of Richard Corben’s horror mini-series; “Richard Corben” and “horror” should be all you need, but if leaf through these EC-inspired tales of rotting corpses and poetic vengeance, and see if that doesn’t seal the deal.  Kill or Be Killed is crime-noir with supernatural overtones (maybe…) by the Marvel 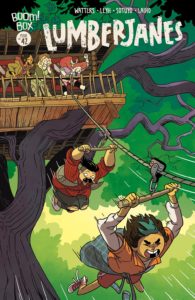 Zombies/Criminal/The Fade-Out duo of Brubaker and Phillips; it might be their best-looking book yet, and definitely has easy-to-like, compelling plot and characterization that keep turning out to be more complicated than they seemed at first — but in a good way.  Groo, Lumberjanes and Rick and Morty are all cartoony/animated-style books (in fact, it’s strange that Groo has never been turned into a cartoon, hasn’t it? Maybe nobody can figure out how to translate Sergio Aragones’s obsessively-detailed panels into cheaply-made sequential cels…); Groo is 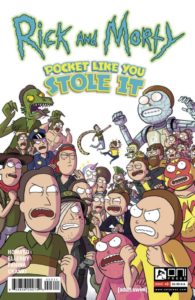 by far the oldest, although Lumberjanes‘s troop of outdoors-camp girls who are scouts (but not Girl Scouts…) has reached 42 issues, a very respectable run that indicates the attraction of its offbeat fantasy adventure laced with girl-power and diversity themes. Rick and Morty‘s main series is almost at the 30-issue mark, although it’s got the cult-favorite TV cartoon working for it to attract readers; this mini-series that’s a takeoff on Pokemon Go, with infinite variations of Mortys, Ricks and Jerrys getting captured and battling, has all the cynical humor and gleeful mean-spiritedness of the original, and should be just as enjoyable to its many fans.

With 40 years of experience in comic reading, collecting and reviewing, English Professor Phil Mateer has an encyclopedic mind for comics. Feel free to ask Phil about storylines, characters, artists or for that matter, any comic book trivia. He will post your questions and answers on the AABC blog. His knowledge is unparalleled! He is also our warehouse manager, so if you are looking for that hard to find comic book, ask Phil!
View all posts by Phil →
This entry was posted in New Comics, Reviews and tagged Batman, Dark Nights Metal, Defenders, Groo, Gwenpool, Harley Quinn, Kill or be Killed, Lumberjanes, Mage, Mister Miracle, Rick and Morty, Rocket, Runaways, Secret Empire, Shadows on the Grave, Sheena, Sink, Spider-man, Spy Seal, Squirrel Girl, Superman, Teen Titans. Bookmark the permalink.