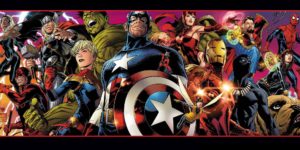 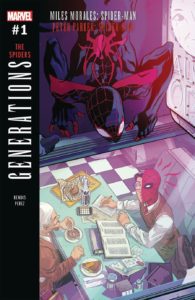 Marvel Legacy is, thankfully, pretty good — Aaron, Ribic, McNiven and Wilson are top-tier creators, and they get 50 pages to prove it, with the Avengers of One Million BC against an insane Celestial, plus modern-day cuts focusing variously on Captain America, The Falcon/Jane Fos-Thor, Ghost Rider/Starbrand, and one other character (and one other group) whose names would be spoilers, both of which are handled well; plus, there’s lots of small scenes and Easter eggs involving most of Marvel’s other characters, with glimpses of their storylines, too — and all of it is told smoothly and entertainingly enough to make you want to check out at least some of those new comics. Meanwhile, the last two Generations books arrive: Spider-Man zaps Miles back to newly-enrolled college freshman Peter Parker, circa Amazing Spider-Man #33, where they have a long Brian Bendis-ian, 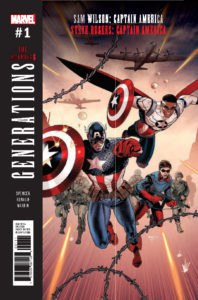 character-revealing conversation that’s enhanced by Ramon Perez’s ability to pay tribute to Steve Ditko without actually drawing anything like him (except for a gorgeous endpage of Parker looking out a window that’s a deliberate tribute).  Generations: Captain America, written by Nick Spencer, sends Sam back to the early days of WWII, where, older than that era’s Steve Rogers, he becomes the sometime-mentor; Spencer emphasizes the equal commitment and moral authority of the two characters, and, with a present-day framing sequence of Sam being debriefed and then reuniting with all the other now-returned legacy heroes from the other Generations books, provides a decent final coda to Secret Empire. 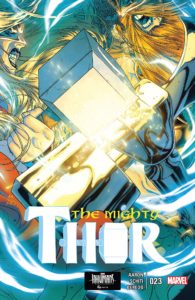 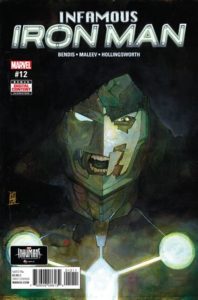 Although Thor says it’s issue #23, it’s really #699, barreling toward #700 with a big intra-Thor fight (with a surprisingly-quiet, and moving, resolution) and lots of set-up for the big game-changing blowout next issue; it’s also by Jason Aaron, who’s spent a couple of years making this the best of the younger-hero-takeover books by simply continuing it as the same Thor comic it always was, just with an emphasis on a different, and equally heroic, cast member; this week’s issue shows exactly why that’s worked so well. Infamous Iron Man ends its run with its own blowout, a wonderfully-colored battle pitting the Iron Man-armored Doctor Doom and Doctor Strange against 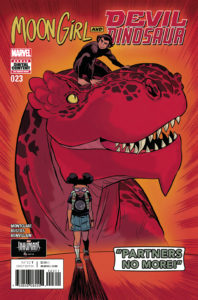 the newly-revealed Big Bad, Mephisto, with a four-page freeze-frame villain monologue that only Bendis and Maleev could pull off, double-page splashes at the beginning and end to highlight the art, and a couple of Ben Grimm scenes that feel just right.  I’m not sure how some of the middle chapters of this series worked as individual comics, but as one big story it’s going to be impressive, and this last chapter shows why.  Moon Girl and Devil Dinosaur‘s cover tribute to Amazing Spider-Man #50 shows exactly what it’s about, and demonstrates why Natacha Bustos has been such a big part of its success in attracting new comics readers; here, and in 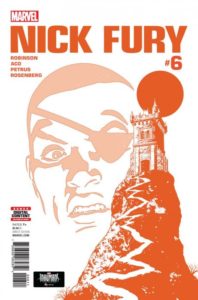 the book, she wrings every possible emotion out of her big voiceless saurian co-star with just a few well-placed lines, and Brandon Montclare knows just how to use that skill to press the readers’ buttons, and make us care about what happens to these characters. Nick Fury ends its run after six issues: a stealth mini-series, probably, although Marvel would have kept it going if sales had been higher. They should have been: it’s offered six self-contained, high-octane super-spy tales, propelled by Robinson’t whip-crack plotting and ACO’s stylish, Steranko-influenced graphic-design skills, and this sequel to the 1968 Nick Fury #3 gives them one last chance to pay tribute to the master. 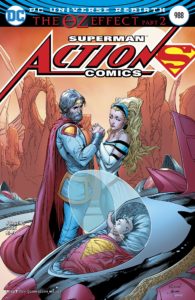 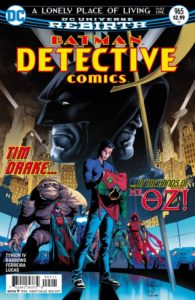 Both the Superman and Batman titles are in the middle of big overarching stories right now; Action confirms its story’s importance by sporting a lenticular cover, and continuing from last issue’s revelation that the mysterious Mr. Oz is actually Clark’s Kryptonian father, Jor-El — who isn’t thrilled with his son’s Earth-centric life. Anyone who’s 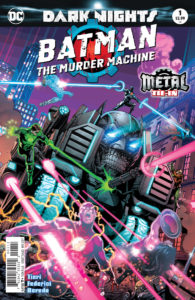 been a comics reader for a while will have doubts whether this is really Super-Daddy, despite attempts here to establish that no, really, we aren’t kidding… but, in either case, it’s a good basis for a story, and one that feels like it will have consequences further down the line. Detective Comics is a companion to it (and not, oddly, to the also-current, parallel bat-serial Dark Nights: Metal), as Tim Drake, captured by Oz/Jor-El and thought dead by his teammates, gets let out of his holding cell, talks to his jailer, gets some backstory, and then, left to his own devices, starts exploring and runs into a couple of familiar characters; Drake fans will be glad to see him getting some 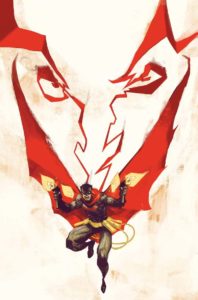 screen time again, and this looks to be a way to dovetail the Bat-family into the upcoming Superman/Watchmen/Rebirth resolution looming in a few months. Dark Nights gets its own one-shot this week, Batman: Murder Machine, as Cyborg, up in the JLA Watchtower, gets a visit from another Dark Batman — this one from an Earth where Alfred got killed by the villains (Bane breaks his back), and Bruce develops an AI Alfred that goes nuts, merges with him, and creates Murderous Cyborg Batman; this being early in the meta-story, our own Cyborg doesn’t fare well against him. It’s a grim story, in both script and art, but that’s its intent, and it fulfills it well enough. The other Bat-book this week, Batman/Shadow, finishes its run in appropriately-pyrotechnic fashion, as the two title heroes battle the Joker and the Stag in 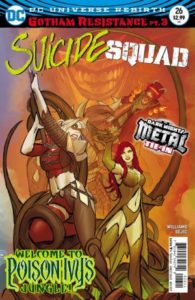 an over-run and seemingly-doomed Shamba-La; Rossmo’s art, good to start with, has gotten better with each issue, and Orlando’s script gives him plenty of chances to show it, especially on the two leads and the Joker. That leaves Suicide Squad, another Dark Nights tie-in, with Harley and Killer Croc teaming with Green Arrow, Nightwing and Damian to battle through a transformed Gotham and rescue Batman — but a possessed Poison Ivy stands in her sometime-girlfriend’s way….pretty good, as these crossovers go, and it should keep Harley, Squad and Bat-fans all happy; it continues into next week’s Green Arrow, so fans of that title will want it, too.

Of the indy debuts this week, DuckTales should get the most nostalgia-driven readers, eager to rekindle their relationship with that late-’80s Disney cartoon that managed to bring the adventure and excitement of Carl Barks’s duck stories to TV-watching kids everywhere, and has just been revived. Like the new animated version of the series, the comic’s style combines elements of the classic Barks designs of the characters with a more-modern cartoon sensibility (it’s particularly noticeable in the faces of nephews Huey, Dewey and Louie, as you can see in the cover, up to the right there), and this first issue has two short stories with just Donald and the boys, and no Uncle Scrooge, Webby or Launchpad (I wonder if they were originally produced for the European market…?), but the humor, and sense of adventure, manage to come through just fine. The Beautiful Death is definitely a 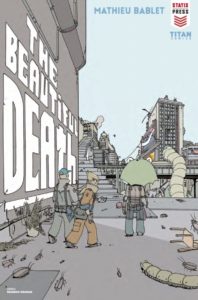 European comic, a multi-part English translation of French creator Mathieu Bablet’s first graphic novel, La Belle Mort, about a post-apocalyptic world over-run by alien insects; it follows three of the few human survivors, as they scrabble and bicker their way through a deserted, half-destroyed urban landscape. Beblet has an angular, partly-cartoony modern style that’s attracted some attention (when Brandon Graham does the main cover for your first issue, you know there’s something good there…), and, while there’s more character- and world-building than action in this  first issue, there’s also  enough interesting bits and visuals to bring readers back for the next installment. 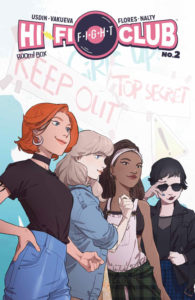 Of the newer ongoing-but-later-than-number-one titles, Hi-Fi Fight Club continues its tale of a girl who starts working at a vintage record store in the late ’90s, and then finds out the other girls working there (and the owner) are also part of an underground teen girl vigilante fight club…

because why not? Reasonably charming, with suitable manga-ish art and a plot about bands mysteriously disappearing; imagine Scooby-Doo as written by Chuck Palahniuk and translated into an all-ages Japanese comic, and there you go. Crosswind, about a hassled suburban housewife and a Mafia hitman whose minds suddenly and mysteriously end up in each other’s bodies, is fortunate to be written by Gail Simone, because she takes what could have been a lurid gender-exploitation B movie and makes it a much more insightful and sophisticated look at sexual identity, power and respect, as each character brings the advantage of a new perspective to their counterpart’s

ongoing problems, and learns about their own strengths and weaknesses too — plus, there’s still the shooting, and the wacking of rude neighbor teens in the head with skillets, and the kneeing of straying husbands in the balls… so, you know, not too sophisticated, but actually just about right. Redneck finishes its first arc (and, since Cates is about to become very visible as one of Marvel’s new writers, maybe its last), as its Texan vampires deal with outraged locals and their own intra-bloodsucker turmoil; the solid characterization and tight genre plotting make it clear why Cates got scooped up by a major publisher so quickly, and Estherren proves a very capable horror and human artist. 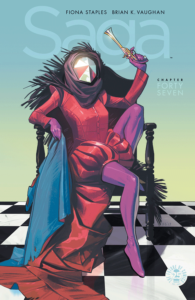 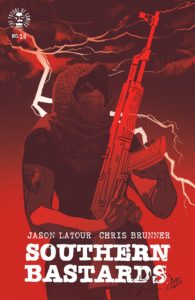 Of the older titles, Saga keeps rolling along, telling its large-scale, large-cast (we’re so caught up in the former The Will being tortured and memory-recorded by a revenge-hungry alien woman diplomat that we don’t even realize that the three main 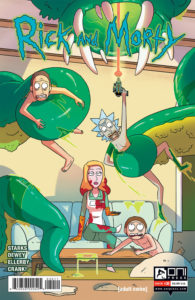 characters never appear this issue) story with skill and grace. Southern Bastards sees the murdered Earl Tubbs’s war-vet daughter Rebecca start to go medieval on the people who killed him, in between some backstory; it’s as bloody, grimly funny and Southern-fried Gothic as always.  Rick and Morty contributes a spotlight story on Beth, the one sane (if alcoholic) member of its cast; we see that her adventures as 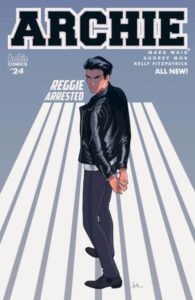 a veterinarian might be even more stressful than her father and son’s extra-dimensional space romps, and reach Bojack Horseman levels of both angst and storytelling quality.  Archie keeps exploring the ramifications of Betty being in a wheelchair (due to trying to break up a drag race between Archie and Reggie), with a grounded Archie hated by her family, Reggie arrested, and, somehow, the regular humor and humanity, too: Waid and Mok keep managing a just-right triangulation between the book’s slapstick/cartoony, small-town ’50s classic style and the too-adult, too-morally-compromised TV Riverdale version, and the book’s popularity confirms it.

With 40 years of experience in comic reading, collecting and reviewing, English Professor Phil Mateer has an encyclopedic mind for comics. Feel free to ask Phil about storylines, characters, artists or for that matter, any comic book trivia. He will post your questions and answers on the AABC blog. His knowledge is unparalleled! He is also our warehouse manager, so if you are looking for that hard to find comic book, ask Phil!
View all posts by Phil →
This entry was posted in New Comics, Reviews and tagged Archie, Batman, Beautiful Death, Captain America, Crosswind, Ducktales, Generations, Hi-Fi Fight Club, Iron Man, Marvel Legacy, Moon Girl, Nick Fury, Redneck, Rick and Morty, Saga, Shadow, Southern Bastards, Spider-man, Suicide Squad, Superman, Thor. Bookmark the permalink.