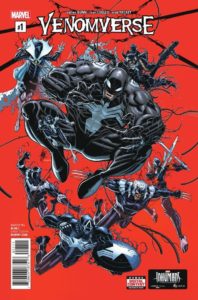 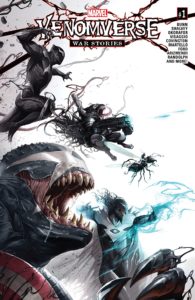 Venomverse, true to its name, is a retread of Spiderverse: dozens of alternate-dimension versions of the symbiote, bonded with characters from Peter Parker to Stephen Strange to Rocket Raccoon, getting together to fight a common threat; it’s a decent example of what it is, and Venom fans — and longtime Marvel fans in general — will find plenty of shiny continuity bits to keep them occupied.  Venomverse: War Stories is a one-shot anthology offering origins for some of the multiversal Venom versions that weren’t covered in the earlier Edge of Venomverse series: a framing sequence by Cullen Bunn and Annapaola Mortello

leads to a female Black Panther/Venom combo by Nnedi Okorafor, Tana Ford and Ian Herring; a Punisher/Venom by DeClan Shalvey and Chris O’Halloran; the Rocket/Venom by Magdalene Visaggio, Alex Arizmendi and Lee Loughridge; and a Doom/Venom by Aaron Covington, Khary Randolph and Emilio Lopez. The Shalvey and Ford stories offer the best art — and, as with the main series, if you’re a Venom fan you’ll probably like this quite a bit.  Generations looks at the Ironheart/Iron Man pairing this week, but instead of Riri going into the past and getting inspiration from Tony Stark there, she travels to the future, where a 126-year-old Stark is now the Sorcerer Supreme. That’s a reasonably-clever twist, especially for a pair of futurists, and 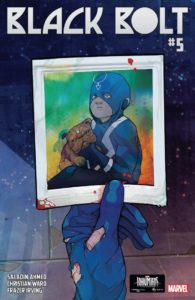 there’s the normal Bendis strengths (the dialogue and future-thinking themes, and Riri herself) and weaknesses (not that much actually happens). As with most of these so far, if you’re a fan of the current character’s book, you’ll like it, and even if not it isn’t a bad introduction to everybody’s status quo as we move into the Marvel Legacy renumbering/relaunch in a few weeks. That leaves two Inhumans books: Black Bolt continues to be an unexpected pleasure, with a stuck-in-space-prison story that combines lots of action, guest stars like the Absorbing Man, and deep dives into the Inhuman King’s psyche, all enhanced by Christian Ward’s delicate, 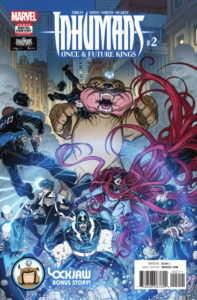 dream-like coloring and painted art (plus: Lockjae: The Early Years!). Once and Future Kings is a look at the Inhumans Royal Family (especially Black Bolt/Medusa/Maximus — and Lockjaw again, too) as kids, fleeing palace intrigue and ending up in New York City, encountering the regular world for the first time. It’s got the usual well-constructed, smart writing by Christopher Priest, while Phil Noto has much the same combination of painted art and ethereal coloring that Ward used to make Black Bolt look so good; there’s also a two-page Lockjaw tale by Ryan North and Gustavo Duarte whose title (“Are You Kitten Me?”) indicates its playful tone. 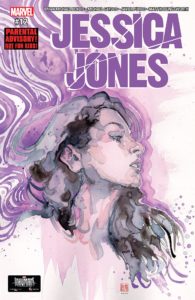 Jessica Jones ends its second arc (and, on the last two pages, sets up the third one, which will feature a character very familiar to both fans of the TV series and readers of the original Jessica comic, Alias), as we find out what’s in Maria Hill’s missing memories, and how it ties into the attempts to assassinate her.  There’s the usual smooth storytelling (Bendis does best with artists who can keep the page interesting even during all of his dialogue-filled conversations, and Gaydos always delivers), with a bonus: the Hill flashbacks are drawn and colored by Javier Pulido, whose minimalist, brightly-hued style is always welcome.  Hawkeye sees

Madame Masque impersonating a captured and imprisoned Kate; that “my enemy wears my face” bit always worked well when Stan Lee did it, and Kelly Thompson gets some nice mileage out of it here, too — and Jordie Bellaire gets a chance to do some flashy coloring over all that sleek Romero art, making this a typically-entertaining issue.  Champions is the same (Humberto Ramos continues to be perfect for illustrating the mix of teens, action, drama and humor that Waid keeps whipping up for him), with an issue focusing on the tightly-wound younger 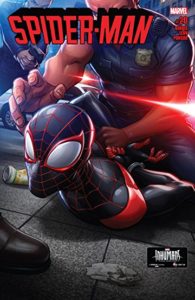 version of Cyclops, and what happens when, thanks to an encounter with Psycho-Man, his inhibitions get released; it’s a done-in-one issue, too, so a good sampler for new, or former, readers. Spider-Man sees Miles struggling with his parents fighting, and whether to keep his costumed identity or not, by traveling to Tokyo just because he can (turns out he’s an anime/martial arts movie fan) and of course getting tangled up with gangsters led by the super-powered Tomoe; separating him from the rest of the cast, and putting him in civilian clothes in a foreign country, leads to some good fish-out-of-water bits along with the usual action and soap-opera ones. 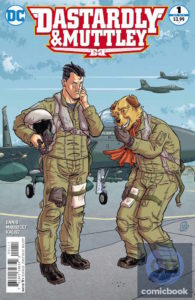 Dastardly and Muttley is an unlikely buy, but it’s by Garth Ennis, meaning it has to be worth a look, right? He ignores 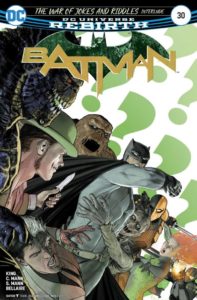 the characters’ origins completely — they’re US fighter/reconnaissance pilots, both human, who fly through a cloud of radioactive “unstabilium 239” caused by a power-plant explosion in the country of “Unliklistan” (Ennis, if you can’t tell by those names, is in broad-satire mode here), and Mutt brings his dog along, and, well, the cover up there to the right indicates the result; the stuff apparently has properties that turn some people into living cartoons. This first issue mostly sets up the premise, and who knows where it’ll go from there, but it’s weird enough to keep my interest for another issue or two, at least.  Batman continues the “Joker/Riddler War,” with Batman now on the side of the Riddler. Instead of a straight-ahead action plot, King’s been playing around with the narrative

throughout this arc, focusing on small-but-critical moments instead of on the panoramic big battles; nothing shows this more than his focus on Kite-Man, the most unlikely of villains, who for the second time is the voice-over and viewpoint character… and one whom, against all odds, we can’t help but root for.  Doom Patrol sees Gerard Way embracing the extreme weirdness quotient of the Grant Morrison run, with Casey’s cat, now anthropomorphic thanks to earlier events, coming back, along with giant romantic-but-killer robots and a subplot about the marketing of a new miracle food called, with symbols instead of letters for obvious reasons, $#!+ ; Nick Derington and Tom Fowler’s charming, cartoony art holds it all together and makes it appealing instead of 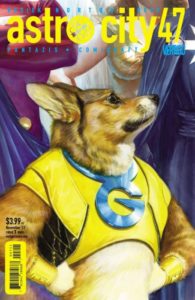 murky or merely strange. Dastardly and Muttley and Doom Patrol aren’t the only DC books this week with human/animal hybrids: Astro City offers the first of a two-part story about a petty thief who steals an amulet that, when he and his pet corgi accidentally touch it, merges them into an anthropomorphic canine superhero. If that sounds stupid… well, looks at the cover just to the left there: Mike Norton draws absolutely adorable dogs, and combining that with Busiek’s regular high-level plotting, characterization and very human themes makes this a book you’ll want, especially if you’re a dog lover (fair warning: it looks like the second part next month is going to break our hearts…).

Made Men sounds like a mobster/crime book, and in fact it starts with a police team being ambushed on a robbery call and all of them dying, including the narrator — except that it turns out her last name is Frankenstein, so she’s harder to kill than most, and knows something about reanimating 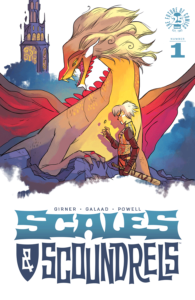 dead bodies…. Artist Susini has a supple, detailed horror style that reminds me of Tom Mandrake’s or Gene Colan’s — look at that cover, up to the right — and while the premise seems a little too glibly high-concept, this first issue sets up the situation well, and ends at just the right place to bring readers back to see what happens next.  Scales and Scoundrels is a D&D-type fantasy adventure (in fact, the opening scene is in a medieval tavern where the heroine is accused of cheating, not at a poker game, but at a variation of Magic The Gathering), with art that’s enthusiastic, detailed and delivered in a broad American/manga style; if you don’t like the genre, it might not convince you to try it, but if you do, the world-building and interesting cast should make you

like it just fine. Lazaretto is about s university freshman dorm at the start of a new semester, with the usual diverse group of characters — the druggie roommate, the naive small-town girl, the smart kid who isn’t sure what he wants to do, etc. — except that there’s also talk of an epidemic of “dog flu” raging across the country, and then one of the newbies starts coughing up blood… it’s published by Boom!, so there’s the usual fairly-cartoony art and YA focus, except that there’s little of the lightheartedness or magical elements of Lumberjanes or Backstagers; so far, it’s more of a horror story, with the setting making it both relatable and chilling. 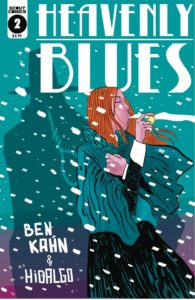 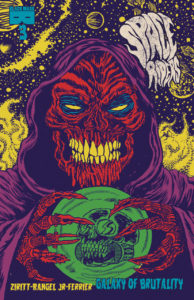 This could have been called Heavenly Heist;  two denizens of hell, a short scrappy girl from the Salem witch trials era and a tall intense ex-criminal mastermind, get hired to steal something from an Archangel, and in this issue they troop around hell putting together a team of experts (the master thief, the getaway car driver) to do it.

The artist, Bruno Hidalgo, doesn’t go for splash pages or huge effects, but uses dynamic panel compositions, exaggerated eyes, and rich coloring to create a cool individual style (see that cover up there?). Galaxy of Brutality  is a garishly-colored 1940s space comic as drawn by the love child of Basil Wolverton and Spain Rodriguez,

and we can always use more of those. The Wicked and the Divine ends with one character killing another, but the great thing about Jamie McKelvie’s art is that, even when the characters are just standing around talking or reacting, they’re so precisely-drawn and fashionable that we’re happy to watch them. Usagi Yojimbo should make us happy, too: it’s the first of a two-part murder mystery featuring the trickster/thief Kitsune and the Columbo-like Inspector Ishida, and it’s as good-looking and perfectly-told as always.

With 40 years of experience in comic reading, collecting and reviewing, English Professor Phil Mateer has an encyclopedic mind for comics. Feel free to ask Phil about storylines, characters, artists or for that matter, any comic book trivia. He will post your questions and answers on the AABC blog. His knowledge is unparalleled! He is also our warehouse manager, so if you are looking for that hard to find comic book, ask Phil!
View all posts by Phil →
This entry was posted in New Comics, Reviews and tagged Astro City, Batman, Black Bolt, Champions, Dastardly and Muttley, Doom Patrol, Galaxy of Brutality, Hawkeye, Heavenly Blues, Inhumans, Iron Man, Jessica Jones, Lazaretto, Made Men, Scales and Scooundrels, Spider-man, Usagi Yojimbo, Venomverse, Wicked and the Divine. Bookmark the permalink.