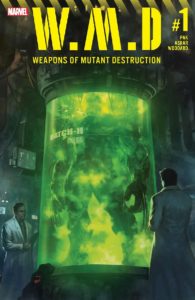 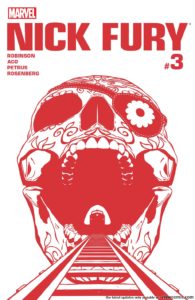 call it SSM from here on out…) could have been a generic bore, but the creative team elevates it.  Chip Zdarsky first demanded attention as the artist/co-creator on Sex Criminals, with Matt Fraction, but he’s been mostly writing for the last year or two, and carving a niche with smart humor-with-action stories on titles like Jughead and Howard the Duck. This style works surprisingly well with a quipster like Spider-Man; the light tone even influences artist Adam Kubert, who adds some subtle manga/cartoonish flourishes that go well with it, and if you need a monthly Spidey fix beyond the flagship Amazing, you could do a lot worse than this. Weapons of Mutant Destruction has an “Alpha” in its title, so you 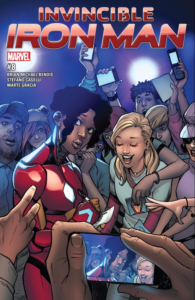 know that it’s an introduction to a crossover, in this case between the black-ops mutant crew in Weapon X and Totally Awesome Hulk. The plot involves a longtime X-nemesis from the Claremont era converting humans into super-powered anti-mutant soldiers, and the tension between the cynical, practical Weapon X crew and the more-idealistic Amadeus Cho Hulk.  Since it’s by regular long-time Hulk writer Greg Pak, everyone’s in character, and there’s enough action and suspense to keep the pot boiling, so readers of either of the two titles should be OK with it.  Nick Fury continues to be better than expected, with writer James Robinson making each of the first three issues a self-contained super-spy romp, and artist ACO contributing layouts and designs that 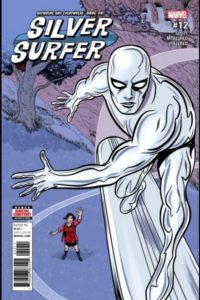 harken back to Jim Steranko’s ’60s work, but add his own personal elements to it too (Rachelle Rosenberg’s coloring nails the combination of psychedelic florescence and modern sleekness just right). Invincible Iron Man sees Riri still learning the superhero ropes, as she finds out why you shouldn’t just fly unannounced into an active police/S.H.I.E.L.D. investigation, has a patented Bendis conversation with Sharon Carter, fights a Doctor Octopus (not Otto, but the more-obscure lady one), gets a couple of origin flashbacks, and ends up in Latveria; I’m still a sucker for rookie-superhero tales, and Caselli does crisp, good-looking superhero art as well as anyone, so, eight issues in, this is still worth keeping.  Silver Surfer continues to be an off-the-radar gift every month; 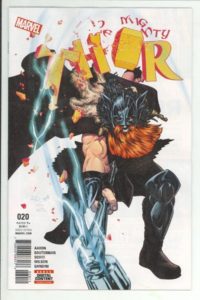 writer Dan Slott hits just the right notes of whimsy and drama and gentle humor, and of course Michael Allred, who’s been drawing the hell out of everything he touches for decades now, makes it look effortless (see the cover up to the left there: no wasted space, and every line in place to form exactly the image required to communicate the story). Mighty Thor introduces yet another hammer-wielder (of the Ultimate universe Thor hammer) — an already-established character, and one who’s both surprising and logical, given the circumstances. Aaron mixes a lot of pathos in with the action, both in the origin tale and in a conversation between an increasingly-fragile Jane Foster and the Odinson; he and Dauterman have always taken a long view with this title, and all the threads and pieces are beginning to coalesce into a big-time 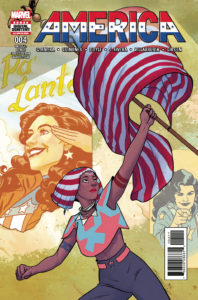 resolution over the next few months; if it’s as good as the resolution to the Aaron/Bachalo Doctor Strange, then we should all come away from it… well, maybe not “happy,” since there are obvious tragic elements looming, but certainly satisfied. That leaves America, which ends its first arc with a resolution and a mystery; the initial few issues felt like they were finding their way, but the ending here is solid, and establishes a feisty, stubborn take-no-prisoners style for its lead character that sets her apart; its modern, diversity-friendly style may not be for all readers, but if you haven’t been reading this comic, this is a good sampler of its charms.

Two more Looney Tunes/DC crossover specials this week.  Last week’s worked a lot better when they came at their stories from the bigfoot-cartoony side; superheroes in a cartoon universe work a lot better than slapstick-aniumation characters in a more-realistic setting. That’s true this week, too; the

Lobo/Road Runner Special actually teams up the Main Man and Wile E. Coyote to battle the speedy avian, but of course the “realistic” story first has to bring in a government experiment to anthropomorphize the desert animals, get them loose, etc. Fortunately, the art’s by Kelly Jones, so it’s got his shadowy, E.C.-style precision going for it, and after the set-up the story provides some sly humor; still, the eight-pager at the back (by Bill Morrison, the same writer as the main story, and drawn by him in a close Warner-Brothers animation style), is tighter, funnier and a lot easier to like. With the Wonder Woman/Tasmanian Devil Special, the same applies: writer Tony Bedard brings 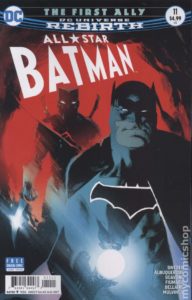 in labyrinths and minotaurs and Diana’s compassionate way with animals in the lead episode, but it’s still weird to see a “normalized” Taz; the eight-page back-up, by Bedard and artist Dave Caldwell, requires a lot less suspension of disbelief despite its full-on Looney Tunes style. Meanwhile, back with the regular superhero books, Batman kicks off a multi-part Joker/Riddler battle. It turns out to be narrated by Bruce Wayne as a flashback; whom he’s narrating it to, and when it actually took place, sets up some interesting questions.  It also shows how confidently King has followed in Scott Snyder’s footsteps on this, DC’s best- 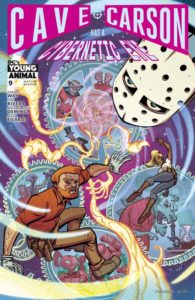 selling regular title, while  Snyder, over in All-Star Batman, is continuing his own adventures of the caped crusader.  The current arc, drawn by Rafael Albuquerque, has its own flashbacks, to Alfred’s youth, and concentrates on the butler/father figure’s deep,  complicated relationship with his employer; it’s as solidly built as you might expect.  Cave Carson keeps buzzing along, with a plot that’s become more and more surreal; in this issue, Wild Dog takes a machete to the head, and turns it into an advantage, while Jeannette solves a problem with both her brains and someone else’s, and there are enough alternate 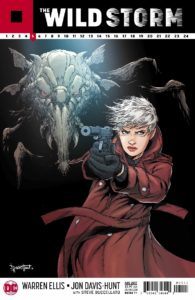 dimensions, flying monsters and shadowy conspiracies to keep even the fussiest reader happy, especially when it’s all illustrated in Michael Avon Oeming’s just-offbeat-enough style. The Wild Storm continues to offer Warren Ellis’s reboot and reinvigoration of that former Image/now DC Jim Lee imprint, with the various Stormwatch and WildC.A.T. members, along with Deathblow and others, making more sense than they have in years; if you liked those titles back in the ’90s, this might be the time to check in on them again, and watch as they get a couple of decades of rust knocked off of them and are rebuilt. 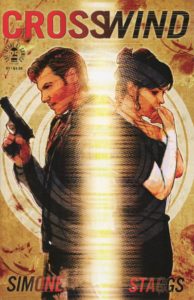 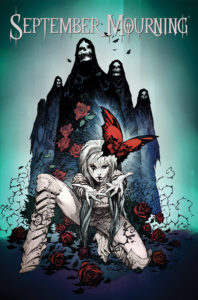 As usual, it’s the indy books that offer the greatest variety, and the most individual work. Crosswinds starts out with a 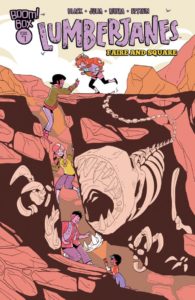 beleaguered, unassertive soccer mom and a contract killer who have no connection to one another, lets us get to know them a little, and then pulls a Freaky Friday on them.  It’s by Gail Simone, so you know it’s going to involve intricate characterization, pitch-black humor, queasy psychological insights into the darkness of men’s souls, imaginatively-unleashed blood, and lots of entertainment; Cat Staggs has a painterly realistic/cinematic style that fits it well. September Mourning, the other debut, is a dark fantasy about soul reapers and two young heroines who come 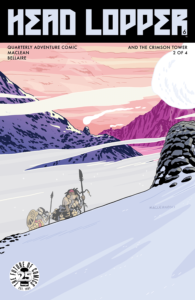 together to fight them; it benefits from artist Kesgin’s ethereal, pretty-looking art, and is fine — although I’d like it better if I hadn’t read last week’s much more tongue-in-cheek Kim Reaper, which covers much the same ground with a lot more quirky humor and offbeat Goth energy. Lumberjanes offers a one-shot by Holly Black, a children’s and YA novelist best known as co-writer of the Spiderwick Chronicles series; she gets the gang to a Renaissance Faire in the mysterious woods surrounding their summer camp, where they end up dealing with a dragon along with the 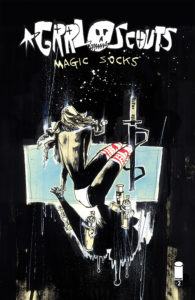 medieval fashions and giant turkey legs.  It’s a clever story with everyone acting in character, and Black has a clear affection for the cast, so regular readers will want this special too, and if you’re a Black fan but have never encountered the Lumberjanes before, this isn’t a bad place to start. Head Lopper is a treat: imagine Moebius doing Conan the Barbarian as an old white-haired brawler who carries around a smart-alec witch’s head and a humongous sword, and it should be easy to see why so many people — especially other creators — admire Andrew Maclean’s work on this book.  Grrl Scouts 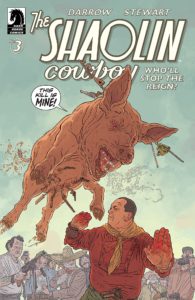 sees division within the trio, as Daphne uses the title accessories to try to take over the world. It features an eight-page fight scene; Mahfood’s underground sensibilities are still front and center, but where before they sometimes clouded up the narrative, now there’s a clarity and flow to the action that really makes it pop, and this offers a lot of just-subversive-enough fun. Shaolin Cowboy is Geof Darrow doing his signature martial-arts monk, who’s battling a giant pig with mommy (and daddy) issues. Come for the high-octane action and the pit-bull-with-knives fu; stay to admire Darrow’s intricate, sometimes- 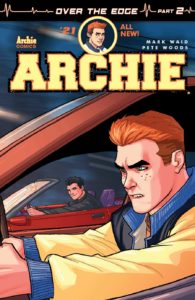 insanely-detailed art. That leaves Archie, in the middle of a three-part drag-racing tale that’s threatening to kill “one of Riverdale’s most beloved residents.” Given the character at risk here, that seems… unlikely (companies don’t just give up their potentially-profitable IPs that easily, especially when there are ads for other books featuring that character in this very issue), but it provides plenty of drama within the context of the story, and Waid and Woods do a good job of getting us to wonder if maybe, just maybe, they might be serious; making us care about the fate of fictional people is exactly what good creators do.

With 40 years of experience in comic reading, collecting and reviewing, English Professor Phil Mateer has an encyclopedic mind for comics. Feel free to ask Phil about storylines, characters, artists or for that matter, any comic book trivia. He will post your questions and answers on the AABC blog. His knowledge is unparalleled! He is also our warehouse manager, so if you are looking for that hard to find comic book, ask Phil!
View all posts by Phil →
This entry was posted in New Comics, Reviews and tagged America, Archie, Batman, Cave Carson, Crosswind, Grrl Scouts, Head Lopper, Iron Man, Lobo, Looney Tunes, Lumberjanes, Nick Fury, September Mourning, Shaolin Cowboy, Silver Surfer, Spider-man, The Wild Storm, Thor, Wonder Woman. Bookmark the permalink.