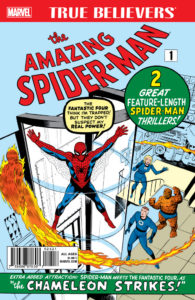 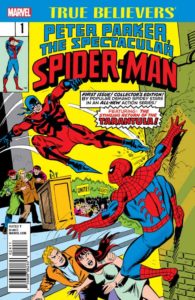 Lots of Spider-books this week, many of them reprints in Marvel’s “True Believers” imprint. Amazing Spider– 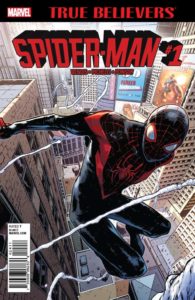 Man #1 is the most important, of course, and if you’ve never actually read it then spend the buck and see how Stan Lee and Steve Ditko launched the title, 54 years ago. Peter Parker, the Spectacular Spider–Man #1 shows what the webhead was like a decade and a half later, with Gerry Conway and Sal Buscema offering a typical adventure from the late Bronze Age, while Spider–Man #1 shows the modern Miles Morales version of the character, with Brian Michael Bendis and Sara Pichelli. That latter 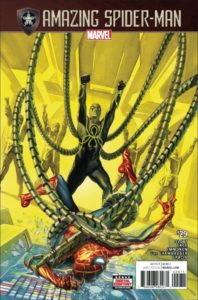 issue, although recent, is hard to find, and of course the others are expensive, so this is a great opportunity to get all three for less than the price of a typical new book. Then, to get completely updated, check out Amazing Spider–Man #29, with Parker battling a reinvigorated Doctor Octopus who’s working with Hydra and has decided to take “his” company back; from the cool Alex Ross cover to the confident scripting to the clear, fluid Stuart Immonen art, it shows that Spidey, even after over fifty years, is still in good hands. Edge of Venomverse doesn’t have Parker himself, but since its character was 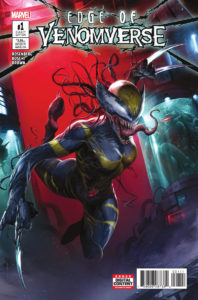 created as a Spider-Man villain, and debuted in his title, it fits here too. It involves a young version of the X-23/Lara Wolverine trying to escape her Weapon X captivity, encountering the symbiote, and teaming up with it; considering that the series is running five issues, and then leading into a Venomverse mini-series after that, it should end up with enough body-possessing, big-toothed, face-chewing aliens running around to satisfy even the most rabid Venom fan. 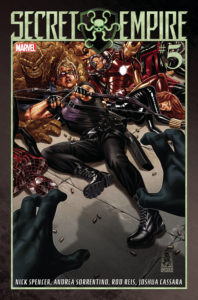 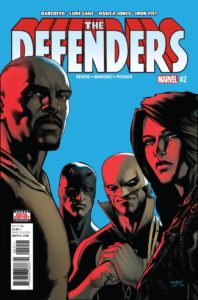 Secret Empire continues to motor along, coming out on time (every two weeks), and offering at least a couple of surprises/revelations/betrayals/resurrections every issue; it’s smack in the middle of the story, so this isn’t the issue to start with, but if 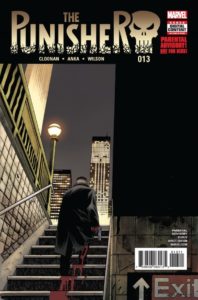 you’ve been reading it it’s another perfectly-competent, entertaining installment of Marvel’s big summer event. The Defenders is a TV-friendly version of that group, with Jessica Jones, Luke Cage, Iron Fist and Daredevil teaming to confront a resurrected Diamondback; there’s even an appearance by Night Nurse, although it’s the Marvel Universe character instead of the Claire version familiar to Netflix watchers.  Bendis knows all of these characters very well, and Marquez has worked with him frequently, so this is a fast-paced, snappy-dialogued and good-looking comic that should appeal to just about everyone. The Punisher 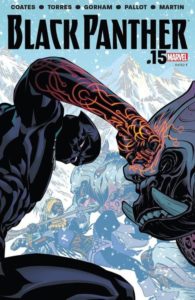 continues to benefit from Becky Cloonan’s smart, bloody-minded scripting; this week’s issue, a one-off breather between the more-traditional multi-part arcs, sees Frank back in New York City, re-establishing his presence while tracking down a gun stolen from one of his safe houses: a great jumping-on/sampler story, especially if you want to see why this is one of the better versions of Castle since the Garth Ennis years. Black Panther sees Ta-Nehisi Coates past his rookie phase and with T’Challa’s setting and supporting cast firmly established; it’s interesting that he’s surrounded the king with powerful women, from his sister to the Dora Milaje women-warrior 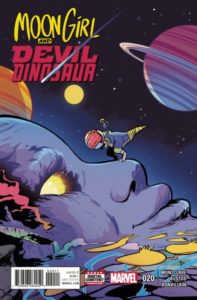 bodyguards to, especially, Storm, and long-time fans should be particularly pleased at how Coates has repaired the relationship between those two star-crossed lovers. That leaves Moon Girl and Devil Dinosaur; this issue sees Lunella and her big red partner in outer space, encountering a moon who actually is a girl, the daughter of the living planet Ego; both the art and the scripting give it a charm that’s hard to resist, and show why its combination of fairy-tale and modern girl-power elements make it so popular with younger readers. 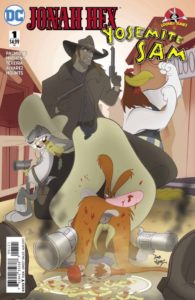 Two more DC/Looney Tunes crossovers this week, and they follow a 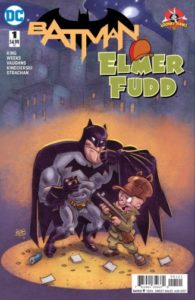 by-now-familiar pattern: a “realistic” tale set in the regular DC universe, followed by an eight-page sequel drawn in the Warner Brothers cartoon style. The realistic installments have been kind of hit or miss, but both this week are decent because of the writers; Jonah Hex/Yosemite Sam is a hard-resist high concept anyway, and Jimmy Palmiotti, who co-scribed the surly bounty hunter’s last run, is the right person for the job here: Jonah’s adventures were always a combination of grit, wit and weirdness, and so a diminuitive Sam as a miner beset by claim jumpers, not to mention Foghorn Leghorn as a guy born with a rooster’s head, fit right in, with the Mark Texeira art working a lot better than you might expect; add 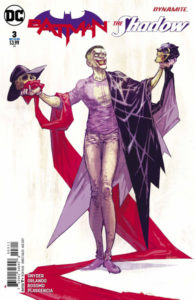 the Bill Matheny/Dave Alvarez back-up, done in a glossy computer-animated style, and the whole package works well. Batman/Elmer Fudd looks less likely as a concept at first, but with regular bat-writer Tom King at the wheel, Elmer as a revenge-driven, shotgun-wielding hunter fits right into the regular Gotham City craziness; mix in a bunch of low-level criminals who look and talk like humanized versions of Bugs, Daffy, Foghorn again, etc., and you get a fairly-serious story where the creators are clearly having a lot of fun too. The back-up, also written by King, and drawn by Byron Vaughn, is total fun: a duck season/rabbit season/bat season romp with the Caped Crusader as the befuddled foil. After that, the regular DC offerings look tame in comparison — but 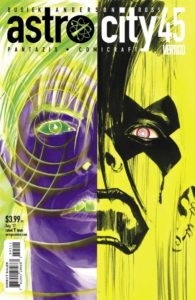 Batman/Shadow holds its own; halfway through its run, it brings in the Joker, and watching Riley Rossmo’s pulpy, cool-looking versions of all the principles is reason enough to buy it. So too for Astro City; Kurt Busiek and Brent Anderson’s clever, heartfelt superhero pastiche has been running for decades, and is always worth a look.  The current tale, about a spirit of music who transforms every generation, with ragtime, jazz, hippie and punk incarnations through the years, shows them as much at the top of their game as ever. 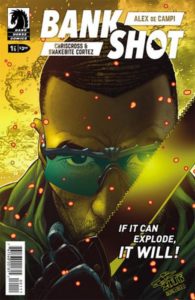 Of the week’s indy debuts, Bank Shot is the newest from Alex de 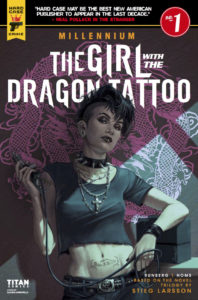 Campi (No Mercy, May Day), who’s developed a reputation for smart, violent action thrillers; this one, about a former soldier with a hidden past who’s part terrorist and part Robin Hood, doesn’t disappoint, especially with the art by Chriscross, who’s pretty good in that genre himself: the cover copy says “If it can explode, it will!,” and if that kind of story sounds fun to you, buy this book. The Girl With the Dragon Tattoo is, of course, in the same genre.  This initial installment begins an adaptation of the first novel in Steig Larson’s trilogy; publisher Hard Case offers 64 pages of story for $5.99, and the art does a decent job — particularly on Lizbeth, the 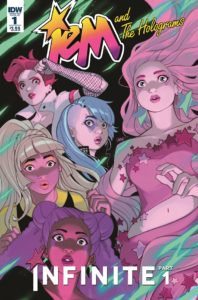 title character — so it’s worth a look even if you’ve never read the originals. Jem and the Holograms: Infinite is a mini-series by that comic’s regular writer, Kelly Thompson; she’s used a combination of precise characterization, humor, girl-group rivalry plots, fantasy and soap-opera relationship drama to make that book into an unlikely hit, and if you’ve dismissed it automatically in the past, this is a perfect chance to see what you’ve been missing. 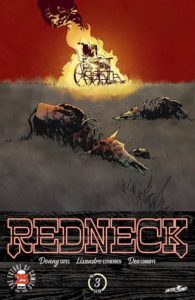 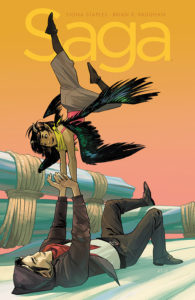 Donny Cates is one of those writers like Tom King who, after a few years scrabbling around on obscure titles, has suddenly gotten hot: just this year, his Image titles like God Country, Redneck and Baby Teeth have been hits, and he’s rumored to have landed the post-Secret Empire Captain America book at Marvel in a few months. Redneck, a modern vampire tale set in a small Texas town, is a good example of his ability to do solid genre stories with clever twists and interesting characters. Saga, after over five years of publication, should be a known quantity by now; Brian K. Vaughan is another writer who’s built a career on genre stories — in this case, space opera with star-crossed lovers — with clever twists and solid, appealing characters, and when he’s got a co-creator like Fiona Staples, whose art is beautiful, 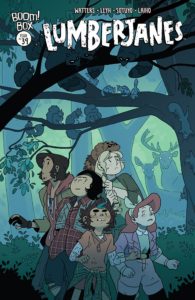 accomplished and capable of just nailing every scene, no matter the mood or situation, it’s easy to see why this comic’s been so popular since its debut, with copies of its first issue selling for well over $200 on eBay. Fortunately, it has a robust set of trade collections, so if you pick up an individual issue like this week’s and like it — and why wouldn’t you? — there’s plenty of high-quality storytelling to get caught up on after that.  That leaves three other comics, all much more cartoony than realistic, although only two of them are actually for kids. Lumberjanes is one; its diverse cast of pseudo-Girl Scouts at a summer camp in the middle of a magical forest is so sharply drawn, and their fantasy adventures so charming and 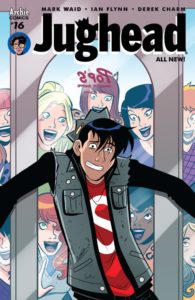 teachable, that it’s easy to see why it’s popular with both younger-age readers and their parents. Jughead‘s been around much longer, but its current run showcases the modern Archie style — slightly less cartoony, but with the same gentle slapstick humor — well.  Mark Waid’s the writer (and it’s interesting how he uses some of the same dialogue tics as Ryan North, the previous writer, did); the plot involves Sabrina, particularly well drawn by Derek Charm, freckles and all — although everyone looks good, including extra guest stars Josie and the Pussycats — making Jug irresistable to women, with the expected comedic results, and is an effective barometer for whether 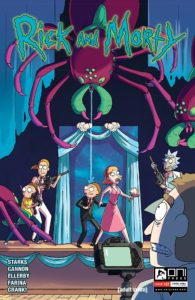 you’d like the other books in the company’s current stable. Rick and Morty is the comic that’s not for children, whom you wouldn’t necessarily want to appreciate Rick’s drunken sociopathic antics, let alone the creepy giant spiders — although the rest of us are free to be amused at the multidimensional cynicism, violence and nihilistic worldview that’s (a) frequently very funny, and (b) always leavened with a touch of heart.

With 40 years of experience in comic reading, collecting and reviewing, English Professor Phil Mateer has an encyclopedic mind for comics. Feel free to ask Phil about storylines, characters, artists or for that matter, any comic book trivia. He will post your questions and answers on the AABC blog. His knowledge is unparalleled! He is also our warehouse manager, so if you are looking for that hard to find comic book, ask Phil!
View all posts by Phil →
This entry was posted in New Comics, Reviews and tagged Astro City, Bank Shot, Batman, Black Panther, Defenders, Girl with the Dragon Tattoo, Jem and the Holograms, Jughead, Looney Tunes, Lumberjanes, Moon Girl and Devil Dinosaur, Punisher, Redneck, Rick and Morty, Saga, Secret Empire, Spider-man, The Shadow, Venom. Bookmark the permalink.