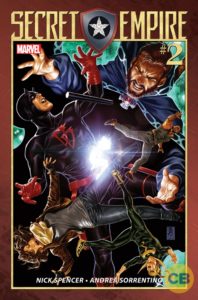 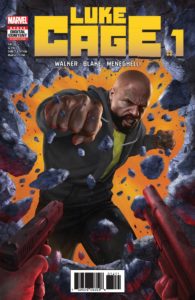 I like the way Secret Empire just jumps to the hope-is-all-gone stage of its Hydra takeover of the US, rather than wasting our time with set-up, and Sorrentino’s and Reis’s moody, dimly-lit art and imaginative page design set just the right tone and keep it interesting while the remaining, underground heroes scrape around and decide on a quest to recover the scattered pieces of a dragonball — er, cosmic cube — as their last hope. Spencer’s got Brian K. Vaughan’s knack for including at least a couple of startling plot twists/wtf? moments per issue, and if Marvel sticks to its schedule — now, eleven issues total (#0-10), all 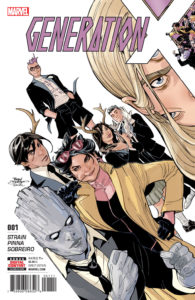 out by September — this should be a fast-paced, high-energy summer diversion.  Luke Cage is meant to be familiar to TV fans, both visually and in its solo-urban-knight murder-mystery plot, but it’s rich in comics-based continuity too (writer Walker talks on the editorial page about buying Power Man #37 off the stands back in 1976, so it’s no surprise when long-ago cast members like Dr. Noah Burstein  show up) and tells a solid story, despite a “bad guy’s weapon damages Luke/Luke can’t believe it” scene that’s a little too reminiscent of the Netflix series. Generation X is basically Kitty Pryde and Jubilee running the Xavier School, with the students being the New X- 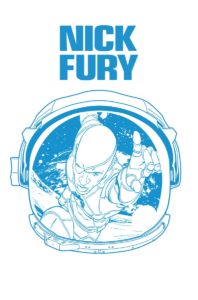 Men, including Quentin Quire; if you liked those Wolverine and the X-Men series a few years ago, when Logan was the headmaster, you should like these too. Nick Fury‘s second issue is a lot like its first — a stand-alone spy mission with imaginative, widescreen art and page design. Writer Robinson used a similar one-issue tales/meta-plot/great, unexpected artists format on Scarlet Witch, to positive critical reaction and mediocre sales, so we’ll see if this can break that pattern: even if not, it’s going to generate some great-looking comics. 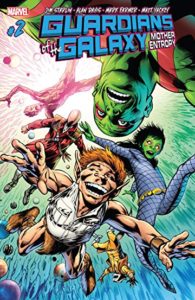 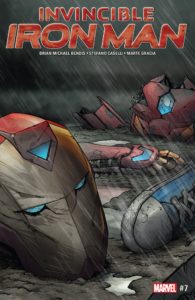 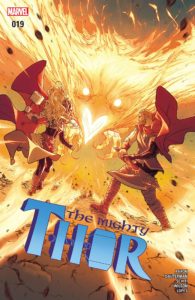 movie fans and fans of ’90s comics (Starlin’s Infinity Gauntlet came out in 1991); its brisk once-a-week frequency and popcorn plot propel it along nicely. Invincible Iron Man has Riri needing fight training after getting beat by a C-list bad guy, and turning to the expanding cast — the A.I. Tony Stark, Pepper Potts, Tony Stark’s birth mom and Mary Jane Watson, among others — to get it; Caselli’s art has gotten sharper and clearer over the course of this series, and, especially with Gracia’s 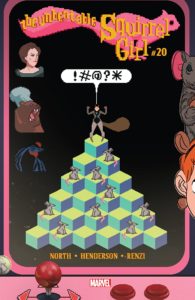 coloring, has something of Jamie McKelvie’s cool realism now. Mighty Thor has Jane Foster battling the Phoenix Force and the Shi’ar gods in space, aided by both Quentin Quire (him again…) and the return of The Guy Who Used to Be Thor; all those yellow flames and cosmic forces make for some great special effects from the art team, and the story has the usual Aaron grace notes, heroism and humor. So too for Squirrel Girl, wrapping up its latest arc with its own by-now-expected elan, sowing its themes of problem-solving through critical thinking, cooperation and STEM training 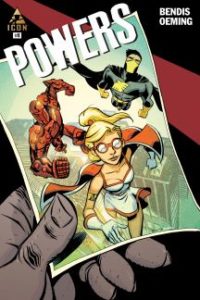 (and, when one’s adversaries are total buttheads about it, out-punching them too), and generally demonstrating what a clever, fun, successful post-Millennial comic looks like. That leaves Powers, back after another hiatus with a one-shot tale about Walker’s past, reminding us just how smoothly Bendis and Oeming can combine their talents after almost two decades of working together; the letters page has Bendis talking about the fate of the two-season TV series, and vowing to continue its stew of police-procedural and superhero-universe elements — his and Oeming’s first true hit, back at the dawn of the 21st century — in comic-book form. 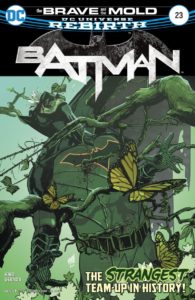 Looking at the mainstream superhero stuff from DC, Flash concludes the four-part “The Button” crossover with Batman, and, as the cover shows, it begins the return of the Justice Society characters, among other things; it also makes the connection between recent manipulation of the DC universe and characters from Alan Moore’s and Dave Gibbons’s Watchmen series more clear, and ends with an announcement of a new Geoff Johns/Gary Franks mini-series in November, Doomsday Clock, whose title indicates that it’s going to resolve the issue — or, at least, make it a lot less mysterious; if you’re a fan of the overall DC universe, 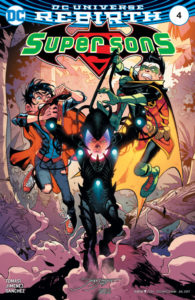 it’s very hard to pass up these meta-content comics, especially when they’re done well, as here. Batman offers a one-shot tale teaming up the Caped Crusader and the Swamp Thing, and everything about it, from the title (“The Brave and the Mold”) to the dialogue to the father/son themes, indicates that Tom King should (a) keep writing Batman forever, and (b) get started on the next Swamp Thing relaunch immediately. Super Sons continues to be much more entertaining than you might think, with its Odd Couple pairing of the cynical-but-mortal Damian and the 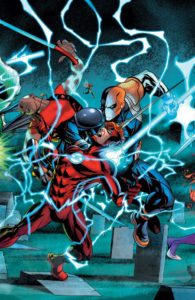 super-powered-but-idealistic Jon, as their fathers — and, at the end of this issue, other family members — lurk in the background; the first arc, which concludes in this issue, was all still on the stands earlier this week, and is worth a look.  Teen Titans features Damian too, as it continues “The Lazarus Contract,” a crossover between it, Titans and Deathstroke that harks back to the early-’80s New Teen Titans; with the writers of all three current books working together, it’s a clever, characterization-rich team-up that, if nothing else, is supposed to change Slade Wilson dramatically, and fans of all three comics should enjoy it.

Astro City‘s latest issue is for cat lovers, as it examines

a felon-catching feline who goes about its duties unbeknownst to its costume-wearing owners; Rick Leonardi makes the people and, especially, the animals just perfect, and if you’ve ever suspected that your own cat had a whole other significant life somewhere  else (they all act like it…), or just always thought Supergirl’s Streaky the Super-Cat was cool, this is the comic for you. The Wild Storm continues Warren Ellis’s reconstruction of that corner of the DC universe; if you’ve read his late-

’90s run on Stormwatch (and you should…), it’s that same blend of super-powers, black ops and high-tech intrigue, except that this time he’s starting from scratch with all the characters, and trying to build them to last. Cave Carson is in the middle of a big arc involving interdimensional demons, an evil earth-based corporation, Cave’s cybernetic eye detached and sending him intel, and lots of other weirdness; it seems to know where it’s going, though, and Oeming’s art enhances and clarifies the crazy, rather than obscuring it, so it’s worth the ride; it, Shade the Changing Girl and Doom Patrol seem to be the most assured and best of the Young Animal imprint so far. 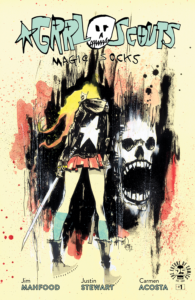 Grrl Scouts is Jim Mahfood’s return to his mid-’90s creation about a trio of kick-ass fighter/mercenary/weed-dealing women (think an American, club-hopping version of Tank Girl).  His underground/psychedelia-influenced drawing sometimes was hard to follow back then, but now has 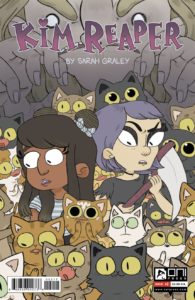 solidified into a kinetic, unique style that can be funny, violent and (rarely) poignant all at once, and Justin Stewart’s precise coloring enhances and clarifies it perfectly. Mahfood was living in Tempe when he first broke big, and even though he’s an LA guy now, he’s still a local boy made good; buy this book, and there’s a good chance you’ll become a fan.  American Gods, published sixteen years ago next month, is, between the TV series and this adaptation, having a moment; the comic’s got 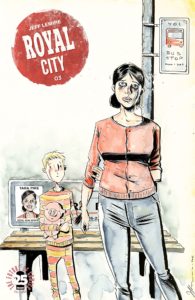 the advantage of Scott Hampton’s sturdy caricatured realism and coloring anchoring P. Craig Russell’s delicate layouts.  Kim Reaper uses a manga trope — young adult encounters supernatural being, and adventures and sexual tension ensue — in an Adult Swim-like goth comic, to good effect; I admire individual little books like this, one creative mind weaving a story and pulling the audience in. One current master of that is Jeff Lemire: look at Royal City, on its third issue and 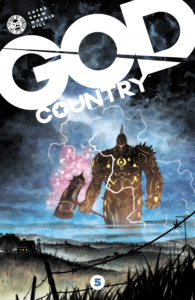 steadily deepening its Chekhovian tale about a failing-factory-town family and their ghosts. For $12, the first three issues offer 66 pages of story, and anyone who likes the narrative tricks and plot twists of a serial TV drama like This Is Us should see if they’re not hooked by Royal City, too. God Country is making good use of its high concept — senile Texas grandpa encounters a sentient alien sword, and as long as he’s holding it he’s in peak physical and mental shape; drop it, and he’s senile Texas grandpa again — and looks like it might be settling in for a long, Saga-like stay: solid, good-looking, well-built escapism is always in style. 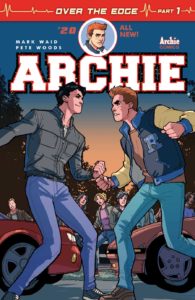 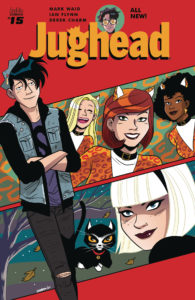 Almost everything Archie’s producing these days is worth a look; a lot of that’s due to writer Mark Waid, who’s been on the main Archie title since its relaunch, and managed just the right combination of relationship drama and slapstick (keeping both, but dialing back on the latter and up on the former); this start of a new arc, 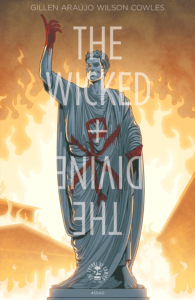 involving an Archie/Reggie drag race with possibly-deadly repercussions, may emphasize those changes even more. On the other hand, Waid’s also writing this week’s Jughead, and it’s the regular clever romp, with Josie and the Pussycats and Sabrina and good intentions turned into a love spell gone wrong; Derek Charm’s art is an inspired match: cartoony and precise, nailing the humor parts (a food-laden Jug’s last-page expression) and the spookier

magic ones equally well (check out his cover, over to the left there…). The Wicked and the Divine: 455 AD is a one-shot involving that title’s perpetually-reincarnated god avatars in the Roman Empire during the year of the title; it fills in some backstory and gives Gillen a chance to showcase another young artist, Andre Araujo (best known to Marvel fans for work on Avengers A.I. and Spider-Verse) with clear composition and a fluid, modern line. The Spirit is Francesco Francavilla doing Will Eisner’s urban-PI character, and another book whose atmospheric, noirish charms should be obvious from its cover.

With 40 years of experience in comic reading, collecting and reviewing, English Professor Phil Mateer has an encyclopedic mind for comics. Feel free to ask Phil about storylines, characters, artists or for that matter, any comic book trivia. He will post your questions and answers on the AABC blog. His knowledge is unparalleled! He is also our warehouse manager, so if you are looking for that hard to find comic book, ask Phil!
View all posts by Phil →
This entry was posted in New Comics, Reviews and tagged American Gods, Archie, Astro City, Batman, Cave Carson, Flash, Generation X, God Country, Grrl Scouts, Guardians of the Galaxy, Iron Man, Jughead, Kim Reaper, Luke Cage, Nick Fury, Powers, Royal City, Secret Empire, Spirit, Squirrel Girl, Super Sons, Teen Titans, The Wicked and the Divine, The Wild Storm, Thor. Bookmark the permalink.