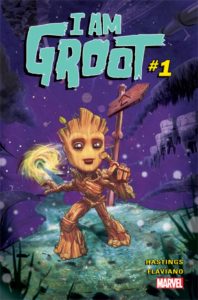 Lots of Guardians of the Galaxy comics this week — for obvious reasons; I Am Groot is, naturally, about the 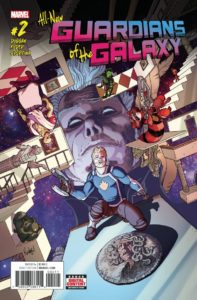 current “baby” form of the character and, while it’s rated “T” for “teen,” younger readers should have no problems with it either, with the art making our hero super-cute (that baby form is very well-designed to be attractive, so it’s hard to screw it up…). We begin with the whole Guardians crew, and then Groot gets separated and ends up on a strange planet/dimension, where adventures ensue. It’s decent enough, and as a first issue readers get in on the ground floor of the story; as a parent, I’m looking forward to the eventual adventures of Surly Teen Groot, but these will do nicely

until then. All-New GOTG is the ongoing series featuring the main group; it’s a caper story, with the crew trying to break into the Collector’s fortress to steal something, and fans of the movie should find it accessible and fast-moving fun. GOTG: Mother Entropy is for fans of Jim Starlin and ’90s cosmic comics, with a bit of Starlin’s regular cast (Pip the troll, especially) and his obsession with personalized universal forces (in this case, the entropy in the title) providing the story engine;  it’s the book most likely to appeal to regular Marvel fans, instead of movie newbies. 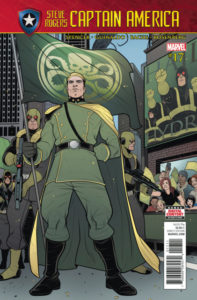 Venom is one of those return-to-the-sequential-numbering anniversary issues, with a return to basics, too, as Eddie Brock is the title character again, and the symbiote seems to have forgotten all that really-a-good-entity stuff from the last couple of years, and gone back to its human-host-assisted murderous ways.  That leads to a solid story, although readers attracted by Spider-Man on the cover won’t find him in that tale, but in the back-up story instead (however, since that’s written by Venom creator David Michelinie, and pencilled by Ron Lim, there shouldn’t be too many complaints). Mix in my favorite part of these specials — a gallery of the covers to all of the previous 149 issues — 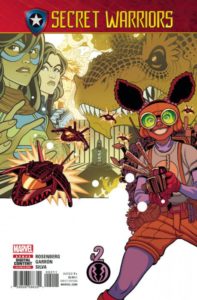 and it’s a nice birthday celebration. Steve Rogers: Captain America is the one essential tie-in to Secret Empire, since it’s by Nick Spencer, that event’s writer, and since this entire volume has been building up to that series anyway; it mostly involves an interview with a journalist, to show just how committed to his takeover Rogers actually is, and it’s suitably chilling. Secret Warriors is a tie-in, too, but more light-hearted (as any book with Moon Girl, Devil Dinosaur and Ms. Marvel would be), as their resistance group (also including fellow Inhumans Quake, Karnak and Inferno) criss-crosses the country, running from Hydra, bickering and occasionally 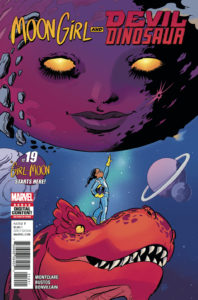 fighting their way out of trouble; the characterization and light touch help its entertainment value. Moon Girl and Devil Dinosaur has the title duo in space, responding to a distress call that turns out to be  considerably stranger than it first appears; Montclare provides a surreal, fairy-tale quality to the script that Bustos just totally nails in the art (Devil Dinosaur’s space suit alone is worth the price of admission), and, like I say every month, you should be reading this comic (a) because it’s good, and (b) because it’s the book that’s attracting younger readers to the comics medium, and therefore will be a big influence on the next generation of creators. 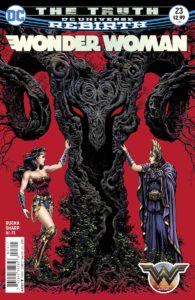 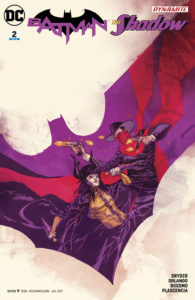 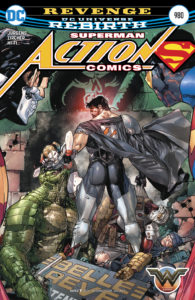 Wonder Woman sees Greg Rucks finishing “The Truth,” with an origin for the warrior princess that consolidates all of her others successfully (and just in time for the movie…); if you started this tale back at the beginning of the relaunch, or were put off by the alternating-stories format and never got back to it, this is a good time to check in and catch the resolution.   Batman/Shadow offers a good 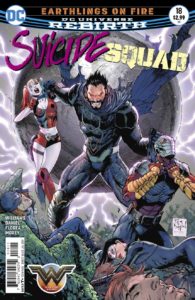 adversarial team-up between those two icons, as a modern-day Batman tries to figure out how the red-cloaked pulp hero can still be alive and ageless; Riley Rossmo’s art continues to be a selling point, and there’s a last-page appearance that should bring everyone back for the third issue.  Action Comics and Suicide Squad are linked (and should be read in that order), as, in Action, Superman faces off against the new Superman Revenge Squad (Cyborg Superman, Eradicator, Mongul, 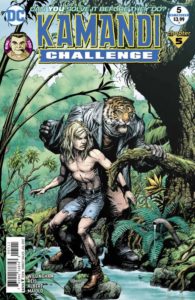 Blanque and Metallo), who, as if that line-up weren’t imposing enough, have decided to free General Zod from his confinement in Belle Reve — leading to the Suicide Squad issue; both comics are good examples of how the Man of Steel titles have been humming along very effectively lately, with Superman’s various pasts all integrated again and enough formidable foes to keep the pot boiling.  Kamandi Challenge has been noteworthy mostly for its creative teams, and this issue is no different — writer Bill Willingham (Fables) always offers careful, thoughtful plots with unexpected twists, 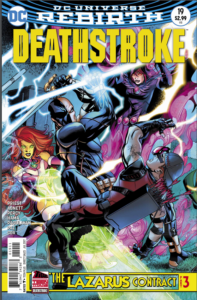 and Ivan Reis has a detailed, solid style that works particularly well with all the anthropomorphic characters running around; both creators combine for a last-page cliffhanger that should be, yes, an actual challenge to the next team. Deathstroke offers the third installment of the four-part “The Lazarus Contract” crossover with Titans and Teen Titans (to be concluded in Teen Titans Annual #1, next week), and looks like it might actually be reworking Slade Wilson’s character and motivations permanently; this comics’s been well-written since its “Rebirth” relaunch under Christopher Priest and right now offers a good time to hook on to it. 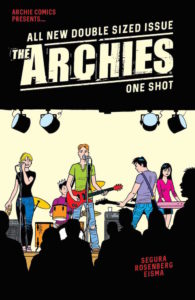 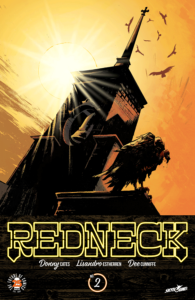 now the world’s second-most-famous cartoon band; it’s a character-rich, satisfying done-in-one story, and worth the $4.99 cover price just for the Jaime Hernandez main cover. The Normals is a comic about a seemingly, um, normal family who turns out, to their surprise, to be anything but; it’s a good first issue, with an effective

final-page reveal — although we’ll need another episode or two to see if it has any legs. Rednecks does; its second issue, about a family of vampires who keep to themselves in small-town Texas (but inevitably get provoked) builds on its debut nicely, and justifies the commitment of everyone who bought the first issue. So too for Shaolin Cowboy (although, now on its third mini-series, it’s much more of a known entity): Geof Darrow’s indomitable monk continues his obsessively-detailed, improbably-violent and surreal humor-crammed adventures, and we’re all the better for it. 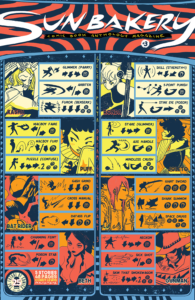 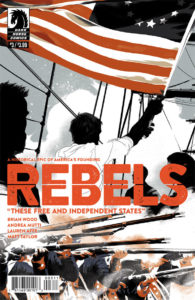 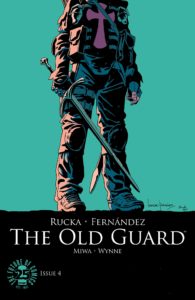 O’Malley/manga style that allows for extreme stylization, and, coupled with some amazing coloring, lets him achieve very different looks and effects over the five installments here; in a slow week like this one, it’s worth the extra $4.99 just for the chance to catch some gorgeous art.  Rebels is set in 1798, halfway through John Adams’s presidency and in the middle of an English/French trade war in the 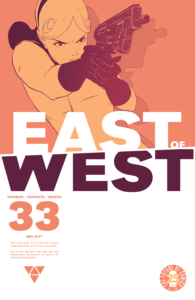 Bahamas, with a semi-autistic, mechanically-brilliant shipwright helping the American merchentmen who are fighting off both sides; it does a good job of personalizing its time period, and evoking both its cruelties and its strengths.   The Old Guard is Greg 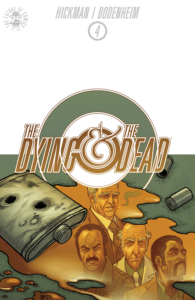 Rucka again, on his creator-owned fantasy-adventure tale about immortals that’s as tightly-plotted and smoothly-presented — with a couple of plot twists each issue — as all of his work.  Jonathan Hickman knows something about tight plotting, too — Faulknerian-level, as with his long-running East of West, about an alternate-history US divided into different kingdoms, fighting a pre-apocalyptian group of supernatural beings; there’s also his The Dying and the Dead, back after a long enough hiatus that you might have to review the first three books to make sense of this fourth (but, once you’ve done that, this next installment is totally worth it…). 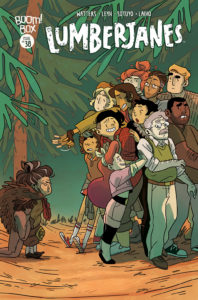 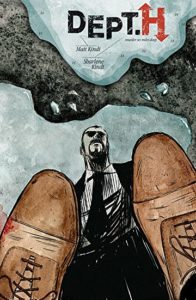 In Lumberjanes, a parent/kid weekend in the enchanted woods (which the kids know is enchanted and the parents don’t) turns unexpectedly sinister, while Dept.H is approaching a conclusion (trapped-underwater stories can only go on so long…), with a 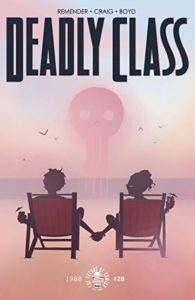 major character falling prey to the addictive, toothy lure of rapture of the deep; the art on the money pages shows that Kindt knows exactly what he’s doing. So too with Deadly Class, where Rick Remender and Wes Craig got rid of a major character at the end of Season One, got us all to focus on the incoming Season Two freshman class instead, and then made a cheesy, totally-successful swerve: a reminder of the kind of serial plot thrill that only comics can do see well.

With 40 years of experience in comic reading, collecting and reviewing, English Professor Phil Mateer has an encyclopedic mind for comics. Feel free to ask Phil about storylines, characters, artists or for that matter, any comic book trivia. He will post your questions and answers on the AABC blog. His knowledge is unparalleled! He is also our warehouse manager, so if you are looking for that hard to find comic book, ask Phil!
View all posts by Phil →
This entry was posted in New Comics, Reviews and tagged Archie, Batman, Captain America, Deadly Class, Deathstroke, Dept.H., Dying and the Dead, East of West, Groot, Guardians of the Galaxy, Lumberjanes, Moon Girl and Devil Dinosaur, Old Guard, Rebels, Redneck, Secret Warriors, Shaolin Cowboy, Suicide Squad, Sun Bakery, Superman, Venom, Wonder Woman. Bookmark the permalink.