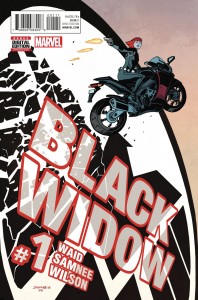 Two debuts from Marvel: Black Widow‘s had a lot of anticipation, coming from the Daredevil team of Waid and Samnee, and what this first issue offers is basically the first five minutes of a James Bond or Mission Impossible film: a full-on action sequence/chase showcasing the super-spy derring-do aspects of the character. Since much of it is wordless, it’s over quickly, and readers may feel like “That’s it?”, but if they go back and appreciate the marvelous Samnee art and Wilson coloring (they’re working in a darker, more shadowy tone than the brightly-colored DD), and note just how well-choreographed everything is, there should be no complaints. Avengers Standoff: Assault on Pleasant Hill Alpha (which isn’t even the longest title on a Marvel book this week), launches the spring Avengers crossover event, involving S.H.I.E.L.D. using sentient cosmic cube fragments to brainwash bad guys into living in 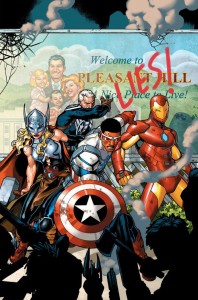 a seemingly-normal little town that’s actually their prison. If you’re guessing that something goes horribly wrong and the bad guys get loose (and, due to some arglebargle plot mechanism, they’re even in their costumes)… well, congratulations! You can plot Marvel comics too! This is all fine for what it is, with both the art and story offering standard superhero plotting and visuals; if you’re looking for unexpected twists or surprises, however, you’re in the wrong place… at least so far. Get this if you’re reading any of the Avengers, Captain America or S.H.I.E.L.D. books, though, because it’s going to be affecting them for the next two months, and you’ll want to know what’s going on. 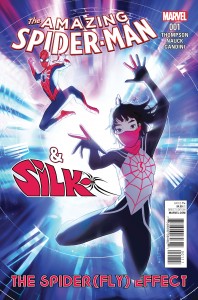 Marvel continues to pitch a number of their books at the all-ages, diversity-hungry YA audience (and good for them), and these all qualify: Amazing Spider-Man and Silk is a mini-series, drawn closer to Silk’s more-simplified, cartoony style (with Nauck, who’s been working in that vein for decades, a good choice for the visuals), about the title characters teaming up against Hydra and ending up accidentally teleported to the past, with Back to the Future-ish timeline-altering results; it’s a decent-enough attempt to boost Silk’s visibility and popularity, with a 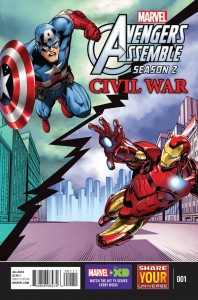 clear story and a logical-but-surprise twist at the end.  A-Force continues to improve with each issue, as it pulls its team (She-Hulk, Captain Marvel, Medusa, Nico, Dazzler and Singularity) together to fight a cosmic bad guy, and the various inter-relationships start to gel; it’s easy to like these characters, with their easy repartee and their casual heroism, and there’s more than enough action to satisfy any regular superhero fan, too.  Marvel Universe: Avengers Assemble is based on the TV cartoon (in fact, the art here looks like it came directly from the show), and, as the rest of the title suggests, it’s adapting that program’s version of “Civil War”; if you like the cartoon or movie versions of the characters, this will be a familiar, and 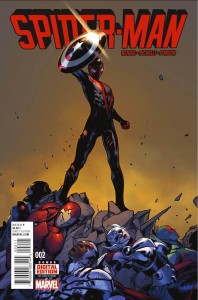 entertaining, comic.  Spider-Man, like A-Force, is a mainstream superhero title that makes the list because of its more-diverse title character (Miles Morales, who, thanks to Secret Wars, has now always been in the regular Marvel universe). Bendis and Pichelli have been telling his adventures for a long time, and seeing him interact with all the regular Marvel crew (including the Avengers and the Peter Parker Spider-Man) while finessing questions about his costumed name and ethnicity shows just how appealing the character can be (watching Miles and Peter, both in costume, trade quips is almost as funny, and considerably less R-rated, than when Deadpool and Spidey do it). 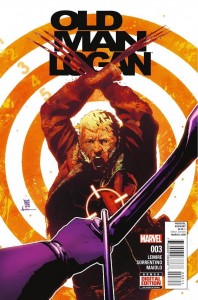 Two more Marvels: Old Man Logan has that character, new to our Marvel Earth and trying to insure that its future doesn’t end up like his (with the heroes all dead) trying to track down Clint Barton and finding Kate Bishop instead; he talks her into helping him find Mysterio (who was a big part of the villain cabal that ruined his own timeline), but a lot of questions arise about how much “our” present has already diverged 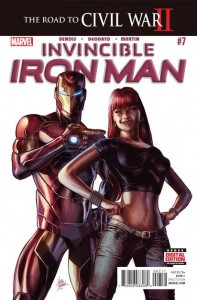 from his, and whether Logan’s  propensity for extreme sanctions is necessary. This culminates in a last-page guest star that offers a logical (and geriatric) team-up for next time. As always, Lemire offers a clever, smooth script and Sorrentino a dark, painterly art style that works well with the book’s noir sensibilities. Invincible Iron Man is a lot brighter (although Bendis’s plot has things looking grim for Rhodey), as Mary Jane Watson begins her first day as Tony Stark’s personal assistant/organizer, leading to lots of snappy dialogue and a few surprises on each side; Bendis’s Stark is about as close as we can get to the movie version, equal parts idealist and egotist, and watching him and Mary Jane spar is a lot of fun. 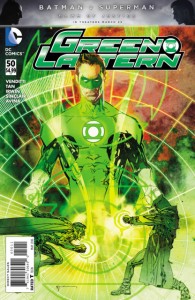 A handful of DCs: Green Lantern is the first of the New-52 books to reach its fiftieth issue, and indicates what the format for the other characters’ anniversaries will be: double-sized all-action 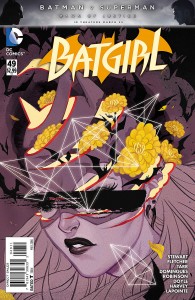 issues, with major climaxes (but, in GL’s case, not a story conclusion yet), leading into the 51st and 52nd issues, and then Rebirth. Here, we get a big throw-down between Hal (whose power, and his relationship to it, is mutating) and the alternate-universe version of himself that became Parallax, and came over to the main DC universe during Convergence. Even if you haven’t been following some of these characters, it looks like the 50-52nd issues might be worth catching up on (assuming they’re all as big-screen pyrotechnic as this one), just to see how their stories end.  Batgirl uses a dive into Barbara’s mind (courtesy of  Black Canary and Frankie, trying to repair the damage caused by a memory-altering bad guy) as an excuse to bring back a lot of different artists for the various in-Barbara’s-brain sequences; it’s nice to see everyone’s 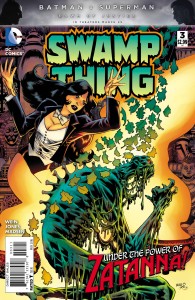 disparate styles mesh so well (and interesting to note how much the Babs Tarr pages seem like the “real” Batgirl now), and the comic does a good job of setting up a big confrontation for, yes, the 50th issue next month. Swamp Thing, meanwhile, continues to offer a pleasingly-old-school version of the character, thanks to his creator Len Wein and the very talented, EC-inspired Kelley Jones; this issue involves the return of Matt Cable and a guest appearance by Zatanna, as the swamp creature pursues an opportunity to become human again (just as with Marvel’s stick-the-bad-guys-in-a-small-town idea, you don’t really have to read any further to know that this isn’t going to turn out well….) 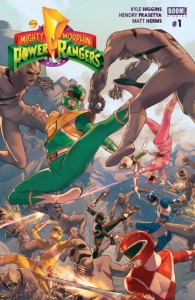 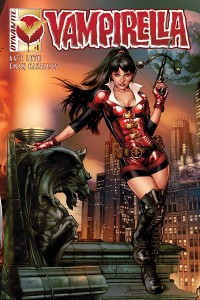 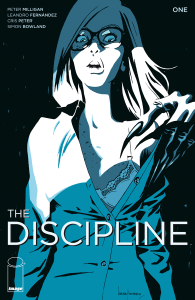 All the indy books: Mighty Morphin Power Rangers gets points for being considerably less stupid than it might have been, with a clever Wayne’s World-style fan-podcast to bring readers up to speed at the beginning; it does suffer from what a lot of ’80s/’90s revivals like Thundercats or Masters of the Universe have in the past: it tries to treat its absurd premise too seriously, when more over-the-top kids’-show weirdness and go-for-it manga pizzazz would have added a lot more energy to the mix. If you were 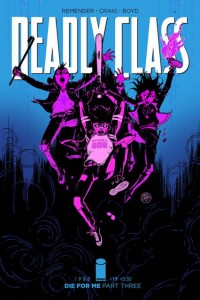 ten or twelve years old when the originals came out, though, you’ll probably have a soft spot for this.  Vampirella is interesting because writer Kate Leth, who’s spent time on various Adventure Time titles and is currently scripting Marvel’s criminally-underappreciated Hellcat, is a rising young talent.The scantily-clad, bloodsucking alien from Draculon has a long history, though, and a lot of very good writers have chronicled her adventures; this first issue is well-put-together and entertaining, but doesn’t offer any turn-your-head moments to put it 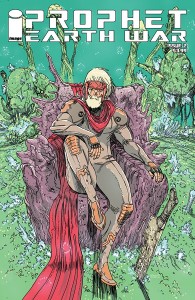 into the top tier… not yet.  Discipline is a typical Peter Milligan Vertigo mini-series (except that it’s being published by Image), with a woman being initiated into a secret society that taps her inner beast… or something (all those Milligan series tend to run together…).  Deadly Class is still in the middle of a big graduation/slaughter/chase arc, lightning-paced and very well-done; this issue is only a middle chapter, but actually not a bad spot for new readers to check in and see if they like it.  Prophet: Earth War continues to be Brandon Graham and Simon Roy’s surreal sf tribute to Moebius, Planet Comics, Jack Kirby and A. E. van Vogt: if you like ’70s Heavy Metal comics, you’ll appreciate this book.

With 40 years of experience in comic reading, collecting and reviewing, English Professor Phil Mateer has an encyclopedic mind for comics. Feel free to ask Phil about storylines, characters, artists or for that matter, any comic book trivia. He will post your questions and answers on the AABC blog. His knowledge is unparalleled! He is also our warehouse manager, so if you are looking for that hard to find comic book, ask Phil!
View all posts by Phil →
This entry was posted in New Comics, Reviews and tagged A-Force, Amazing Spider-man, Avengers, Batgirl, Black Widow, Deadly Class, Green Lantern, Iron Man, Mighty Morphin Power Rangers, Old Man Logan, Prophet, Silk, Spider-man, Swamp Thing, Vampirella. Bookmark the permalink.