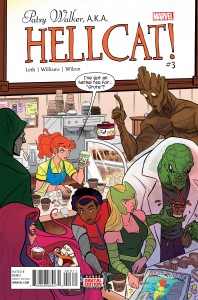 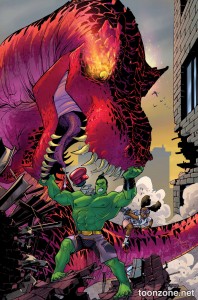 Another week with a big batch of diverse-audience-friendly comics, four of them from Marvel; none of them are breakout hits as monthly pamphlets in comic book stores, but most of them do well in digital versions and as trade paperback collections — a logical development, given that their intended audience is millennials and younger readers. Patsy Walker, A.K.A. Hellcat, is a good example of the genre: brightly colored, with a simplified manga style, cartoony and striking, and a cast of diverse twenty-something big-city dwellers, single and open to relationships; it’s got superhero tropes and pays homage to Marvel continuity, but is also accessible to people who’ve never read a regular superhero comic in their lives (in style and tone, it’s not too far from DC’s current Batgirl). Readers who might pick this up because they’ve seen Jessica Jones on Netflix (where Patsy’s a main character) will find it much lighter and breezier than

that show, but should be entertained and amused enough to stick around for more.  Moon Girl and Devil Dinosaur doesn’t have that advantage of a built-in audience, but it’s been quietly crafting two unique main characters: a nine-year-old girl, very smart and independent, and the big, red, also smart (and dangerous, but somehow not to her) dinosaur that fate throws together. Like Hellcat, this is very much a part of regular Marvel continuity (the Hulk — the Amadeus Cho one — guest-stars this issue), but it’s drawn more realistically (Bustos manages to make both Lunella, the girl, and the dinosaur expressive; one’s cute and the other’s feral, but they’re equal in their fierce determination), and the theme, about being misunderstood, is universal. This book may or may not find enough of an audience to survive, but if not it’ll go down as one of those quirky, cool series that was just a little too hard to market, and a little too ahead of 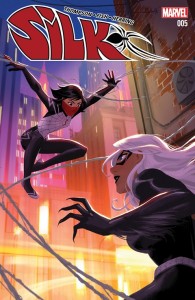 its time. The Unbeatable Squirrel Girl, which has been around since last year in a previous volume, already has the “quirky” and “cool” parts down, but it has found an audience — its trade sales are proof of that — and this issue it rounds out its first arc in its relaunch, with the cast trapped in the past with Dr. Doom, and clever time-travel paradoxes galore (including both old and young versions of its heroine); everything about it, from Erica Henderson’s uncompromisingly-individual art to the little bottom-of-the-page asides by North, is just perfect, and backs up its cover-copy boast that Entertainment Weekly named it “the best superhero comic of the year.”  Silk, with its Spider-Man-like protagonist (a girl who was bitten by the same radioactive spider as Peter Parker) is probably the most mainstream-superhero book of the batch, with its close ties to Spider-continuity (the Black Cat, S.H.I.E.L.D. and 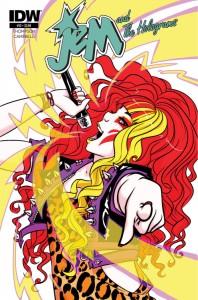 the Green Goblin Nation all figure prominently), but it’s the Veronica Fish art, very animated and manga-influenced, and the female-centric cast that make it a member of this group, and an attractive jumping-on entry to the Spider-verse for new readers. Jem and the Holograms is the least super-heroic, with its girl-band battles and relationship themes, but it still has comic connections, with its fantasy elements and its current “Dark Jem” storyline, and Kelly Thompson’s wise, subtle scripting and Sophie Campbell’s very modern, fashion-conscious art offer an irresistible combination: it’s hard to read an issue or two and not get sucked into its musical, high-energy universe. 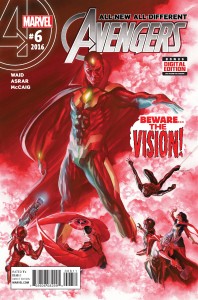 The rest of the week’s Marvels — All-New All-Different Avengers ends its own first arc in fine fashion, as the 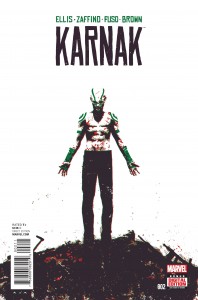 mysteries of the Vision are revealed, the members who’ve been kicked off the team are reunited, and various relationships are resolved, revived or advanced; Waid’s casual mastery of the plotting and character elements, and Asrar’s clear, action-heavy art carry it along nicely.  All-New X-Men isn’t quite that good; Hopeless has a good knack for the various relationships too, but it sometimes reads like he’s trying too hard to be Brian Michael Bendis, decompressed plotting and all. On the other hand, watching the various young heroes battle the Blob is fun, and Mark Bagley’s art is always so smooth, so 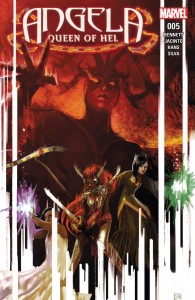 unassuming but super-competent at both human moments and action scenes, that it makes the comic hard to resist. Karnak is typical Warren Ellis: offbeat, darkly philosophical and often violent; Zaffino and Faso are good matches for his precisely-choreographed fight scenes, shadowy religious cults and driven, grim hero. Angela ends its initial arc with some nice art of its own — Bennett gives Jacinto lots of opportunities for Hel-battle splash pages, and she delivers nicely — and another casually female-centric cast: Angela the angel, her great love Sera (their matter-of-fact, no-big-deal lesbian relationship, and Sera’s snarky narration, are 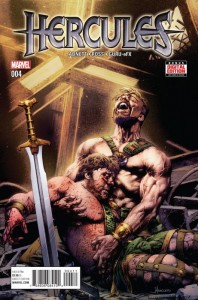 marks of the book’s moderninity), antagonist Hela and, from the Kieron Gillen Asgardian era, Leah of Hel. Hercules is about gods and the modern age, too, as its title representative of the Greek pantheon has been battling a shadowy group of more-modern avatars, some of whom are revealed in this issue: Cryptomnesia, a messenger god of tech who talks in Internet slang, and Catastrophobia, a goddess of war and hatred and free-floating outrage who, among other things, blows up real good. Abnett is dependably clever at this kind of thing, and if you’ve been avoiding this comic (because, you know, Hercules: what can be done with him?), this is a good sample issue to see what you’ve been missing. 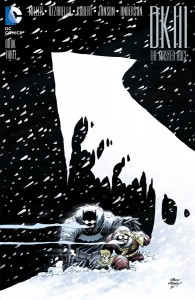 Only two DCs, but they’re each special-event books involving the company’s Big Two: DK III, of course, is the third of the near-future Batman stories ostensibly by Frank Miller (although with Brian Azzarello writing the script and Andy Kubert and Klaus Janson on the art, Miller’s contribution seems limited only to supplying finishes to the small insert comic in each issue).  It’s fine, good-looking and with a suitably-operatic plot, involving hubris, encroaching old age, treason and a bunch of 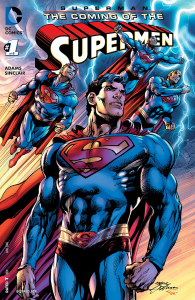 Kryptonian religious extremists from Kandor loose in the world, although it’s got one of those plots that require a number of the heroes to act like idiots (particularly disappointing because one of the elements of DKII I liked the most was the way all the more minor JLAers, like Ray Palmer and Ralph Dibney, had a chance to spotlight their heroism and grace under pressure), and eight issues seems at least two too many. The Coming of the Supermen is a Neal Adams production (with Tony Bedard smoothing over some of his more-Byzantine dialogue tics), with a trio of apparently-super men showing up and getting involved in a big fight with Darkseid; if you liked Batman:Odyssey, Adams’s similar production with the Caped Crusader (which got made fun of early on but turned out to be surprisingly precisely plotted), then this should go down easily, too — and that art is undeniably good-looking. 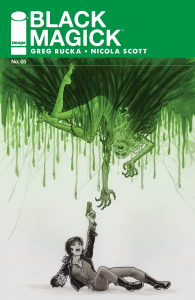 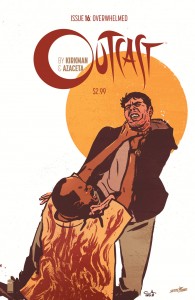 Only six indy books of note for the week, but they’re all worthwhile: Black Magick’s tale of a Wiccan police

officer, battling crime while stalked by a shadowy occult conspiracy, has started to gel nicely, combining Rucka’s well-researched, character-rich story with Nicola Scott’s detailed, painterly art and subtle coloring to deliver its careful portions of action and horror effectively.  Outcast lives up to its Exorcist roots this issue, with a solo Kyle trying to expel a demon, yielding mixed results and a couple of veiled hints about what’s really going on; it’s 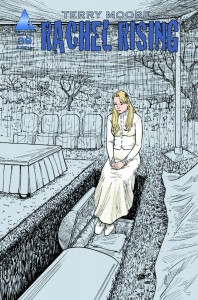 another careful brick in the world Kirkman and Azaceta are creating, both for the comic and for the upcoming TV show based on it. Saga gets back to its main story after a couple of “meanwhile” issues, checking in on Hazel, then her parents, then The Will and the two tabloid reporters; as always, it’s a reminder of how skillfully Vaughan keeps all the plot plates spinning, and of Fiona Staples’s ability to create 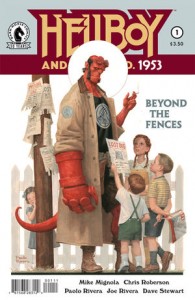 weird-but-logical, fascinating aliens. Rachel Rising is coming into its last year nicely, with Rachel and Lilith having a conversation, and Zoe going on a spirit journey (in a couple of beautiful, wordless pages by Moore) with possibly-fatal implications. Hellboy and the B.P.R.D.: 1953 is exactly what it says it is, a chance to see those characters in their youth, before events in their current books shut the whole show down later this year. Mignola-verse 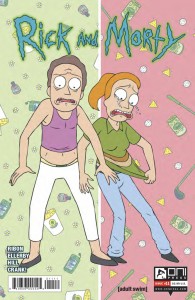 books tend to be remarkably consistent in their quality and tone, but it’s always a little elevated when it’s the Big Red Guy himself, and this first of a new mini-series is no exception. Finally, Rick and Morty is one of those unexplainable phenomena that you just have to experience, both as the cartoon and as the comic: imagine Christopher Lloyd’s Back to the Future Doc Brown as Rick, a perpetually-drunken mad scientist, browbeating his grandson Morty into dangerous and head-spinning adventures across space and time, involving alternate dimensions, evil twins and colorful, often-slapstick violence. Be warned: you’ll either reject it as stupid or embrace it as your newest obsession.

With 40 years of experience in comic reading, collecting and reviewing, English Professor Phil Mateer has an encyclopedic mind for comics. Feel free to ask Phil about storylines, characters, artists or for that matter, any comic book trivia. He will post your questions and answers on the AABC blog. His knowledge is unparalleled! He is also our warehouse manager, so if you are looking for that hard to find comic book, ask Phil!
View all posts by Phil →
This entry was posted in New Comics, Reviews and tagged Angela, Avengers, Black Magick, DKIII, Hellboy, Hellcat, Hercules, Jem and the Holograms, Karnak, Moon Girl and Devil Dinosaur, Neal Adams, Patsy Walker, Rachel Rising, Rick and Morty, Saga, Silk, Squirrel Girl, Superman, The Outcast, X-men. Bookmark the permalink.