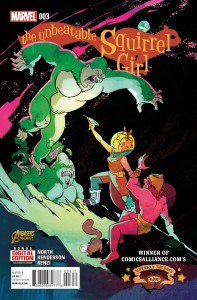 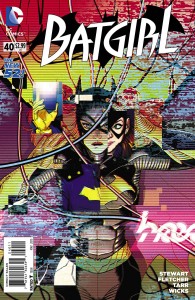 We’re living in a remarkable era of female-friendly comics: not comics exclusively for women, necessarily, since they’re books all readers can enjoy, but books that aren’t just aimed at 14-year-old boys, either, and avoid the over-sexualized or patronizing portrayals of women characters that so many older books pandering to that demographic fell into. Look at the selection this week: Squirrel Girl is just a delight, with its smart, funny and

(usually) confident title character who doesn’t look idealized at all, but refreshingly normal (except for, you know, the tail…). Super-villains like Whiplash? Bank robbers? No problem! Galactus? Also no problem — and that attitude, along with Henderson’s pretty-much perfect art (she has a super-precise line that’s good at people and comedy and action, but also can be dramatic: just look at that last-page splash, guaranteed to bring everyone back for the next issue) make this a great comic, the surprise hit of the year. Batgirl‘s close behind, with a heroine who’s also a smart, very modern problem-solver trying to figure out her place in the world, and being a role model without even trying. The regular book this week concludes the new 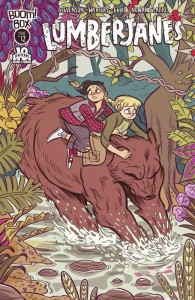 creative team’s first arc, and it’s always refreshing to see a well-plotted story that pays off on earlier questions, resolves its conflicts neatly, and indicates that there was a clever plan all along (the beat-the-computer bit was a little too Star Trek-y for me, but Tarr’s just-manga-enough art is so good at communicating the book’s enthusiasm and optimism that it’s easy to forgive that). Endgame is a one-shot, set during that Joker story running through the other Bat-books, and involves Batgirl defending a bridge (with lots of Joker-virus-infected Gothamites on the other side), and in the process rescuing a little girl; it’s mostly silent, the better to show off Bengal’s skill at coloring and composition, and is just as clever and, ultimately, optimistic and buoyant as the main title 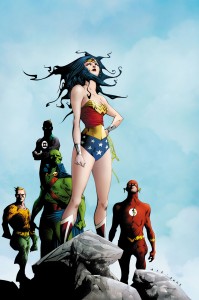 (Batgirl’s “well, crap” emoticon at one point, when a plan fails, sums up the book’s sense of fun exactly). Lumberjanes resolves its story this issue, too, with a similar combination of clever problem-solving, almost-slapstick fun, and subtle character-building; the fact that a book about a pseudo-Girl Scout camp in a semi-mystical forest, drawn in an angular, cartoony style,  is still going strong after a dozen issues is a tribute to the current comics market’s broad base, and good taste. Fans of that book, and of the others in this group, will also want to check out this week’s Sensation Comics, since the lead Wonder Woman story there is by Noelle Stevenson, the Lumberjanes writer and usual artist, too, and its look at a teenaged Diana encountering the modern world, and a couple of girls her own age, for the first time has the same combination of character, wit and generous theme as all the other books here. As I said at the beginning, these books are for any readers who appreciate good comics, but if you know a girl whom you’d like to introduce to the wonders of our little sequential-panel genre, they’d all be an especially-great start. 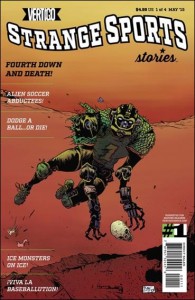 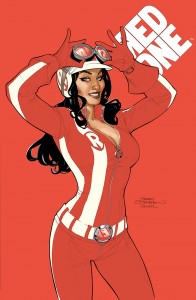 These are all the first issues for the week — Strange Sports Stories, from Vertigo, is a science-fiction anthology (and, I 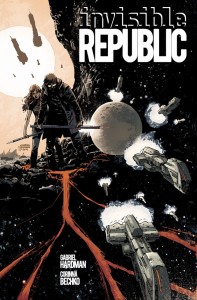 assume, DC’s ploy to retain the… trademark? Copyright? I always mix those up… on that ’60s title), and gets first place because of its eight-page lead-off story by the amazing Gilbert Hernandez,, involving a couple of kids, a bully, and a Martian soccer ball that’s more than it seems. There’s also a cleverly-plotted dodgeball-in-space-prison story by Amy Chu and Tana Ford, an ice-hockey story written by Laurin Beukes and Dale Halvorsem, with art by Christopher Mitten, that wouldn’t be out of place in an old issue of 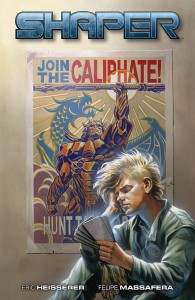 2000 AD, and a quiet, pastoral story about the apocalypse, Cuba and baseball, by Ivan Brandon and Amei Zhao. Red One is Terry Dodson drawing knockout women (if you couldn’t tell by the cover), in this case a Russian world-class gymnast and expert espionage agent who comes to the US in the late-Cold War-’70s to become a superhero… and a spy; it’s all so breezily done, and so good-looking, that it’s easy to like. Invisible Republic is science-fiction again, set on a human-colonized planet that’s just had a revolution, where a reporter finds a 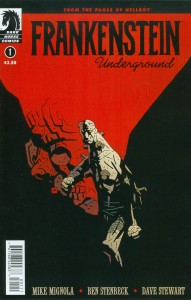 manuscript that sheds light on the genesis of the just-overthrown dictatorship. That’s a perhaps-overcomplicated setup for a debut, although the manuscript flashbacks themselves add some action, and Hardman’s realistic art is worth a look. Shaper is yet another science-fiction series; Heisserer talks about his love for space opera in the editorial material, and this is a classic set-up: orphan boy at a space boarding school finds out he’s really part of the title race, metamorphs who’ve been hunted down by the authorities, and drama ensues. As with Invisible Republic, it’s an OK story helped by realistic, suitably-pulpy art.  Frankenstein Underground is from 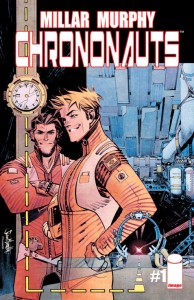 Mike Mignola, who certainly understands classic pulp influences; he’s writing this Hellboy-universe spinoff, while Ben Steinbeck, who’s worked with him before, offers shadowy, evocative art about the classic creature (very Mary Shelley-influenced in this incarnation) who searches for peace in an ancient Mexican temple in the 1950s, but eventually has to face his murderous pursuers. Finally, Chrononauts is the newest Mark Millar series; the first issue is a very standard scientists-trying-to-time-travel setup, although it’s enlivened by Murphy’s expressive facial and figure work. It doesn’t yet show the high-concept fizz of some of Millar’ other stuff, but maybe later issues will have something up their sleeve…. 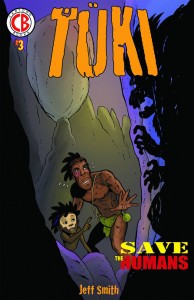 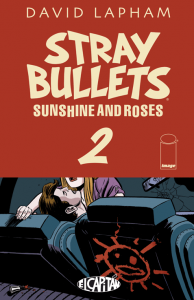 The better indy titles for the week — and six is an impressive number, especially since they all have something to offer. Tuki is Jeff Smith’s prehistoric saga; it 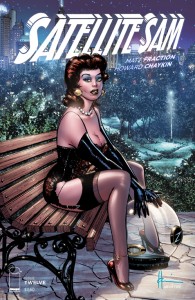 sells maybe 1% of his earlier Bone, and maybe 20% of his later RASL, but it’s very well-drawn and well-constructed, with a lot of research and a number of twists in its premise, and hits a sweet spot almost exactly halfway between RASL‘s serious-adventure plot and Bone‘s comedy (although, come to think of it that title got impressively dramatic eventually, too); its status as a webcomic first gives it an interesting sideways format in comic-book form, more like a newspaper Sunday strip than anything else, and it’s quite a bit of quality fun. Stray Bullets, like most issues, offers a self-contained story about 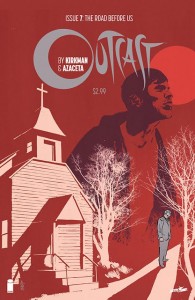 people behaving badly, but this one ends reasonably well, makes a good case for being adventurous over being boring, and is lighter in tone than many of them; that makes it a good introductory issue if you’ve never read it — and, given Lapham’s high-quality art, plotting and intricate world-building, you really should. Satellite Sam is chapter 12 of an also-complicated story, but at least it gives a one-page character/plot summary at the beginning, so newer readers aren’t too lost. It’s not at all self-contained, but, as always, looking at Howard 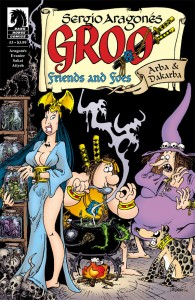 Chaykin’s art (being in black and white helps to emphasize his considerable skills, although if you want color there’s that gorgeous cover), and its expert recreation of the late-’40s setting, is reward enough. Outcast continues its slow build with an issue that’s mostly transition, as its sort-of-exorcist main character tries to find out more about his powers, unaware of the forces marshaling themselves against him; it doesn’t have the gory shocks of some previous issues, and is content to sow the seeds for future developments instead, but Azaceta’s art, which can make even a simple 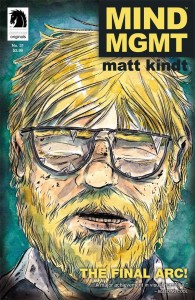 conversation seem creepy and portentous, does its typical good job with what’s here. Groo is, as always, Groo, brightly-colored and fun and funny, as its title character is menaced by witches, and defeats them with sheer cluelessness, while Mind MGMT is entering the end of its run, with five issues to go, and offers Matt Kindt’s very individual art and story about a rogue agency of psychics and similarly-powered operatives, and the people trying to bring it down; there’s still nothing else like it on the stands, and its ability to last for its whole 36-issue run in yet another tribute to the diversity of the current comics market. 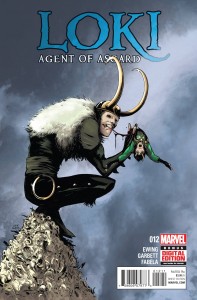 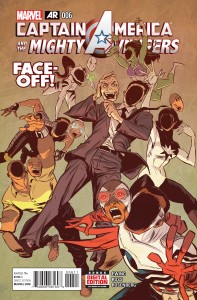 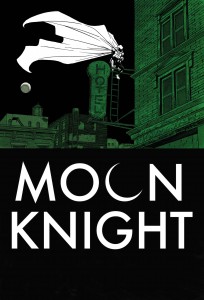 This week’s regular superhero books (at least, the ones I 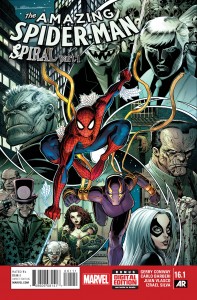 bought…): Loki comes first, partly on the strength of Garbett’s very creepy cover, which accurately sums up the developments inside the book, as Evil Old Loki attempts to corrupt Only Partly Evil But Mostly Just Conflicted Young Loki, and apparently succeeds, with a resolution and conclusion set for next issue. Captain America and the Mighty Avengers gets a mention because

of events affecting one of its characters, Monica Rambeau (formerly Captain Marvel, now Spectrum); let’s just say fans of a previous, and very quirky, Warren Ellis series will be very pleased. Speaking of Ellis, Moon Knight has one of its better issues since he left, with Cullen Bunn offering an effective done-in-one ghost tale instead of getting bogged down in a continuing story. Amazing Spider-Man offers one of those annoying-to-catalogers series-within-the-series 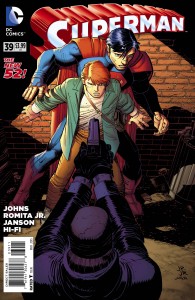 (numbered 16.1, 16.2, etc.) as long-ago scripter Gerry Conway returns with a tale involving lots of classic street-level mobster-type villains (as a look at the cover will attest: as always, if you’re new here, click on the thumbnails to see a larger version…). All-New X-Men is an installment in the “Black Vortex” crossover, which isn’t much of an endorsement, but does offer a Cyclops/Jean/team reunion, and Sorrentino’s painterly art, while in Superman Geoff Johns offers a classic situation — Supes without his powers for one day — with the added incentive of Romita Jr. and Janson’s handsome version of the character.

With 40 years of experience in comic reading, collecting and reviewing, English Professor Phil Mateer has an encyclopedic mind for comics. Feel free to ask Phil about storylines, characters, artists or for that matter, any comic book trivia. He will post your questions and answers on the AABC blog. His knowledge is unparalleled! He is also our warehouse manager, so if you are looking for that hard to find comic book, ask Phil!
View all posts by Phil →
This entry was posted in New Comics, Reviews and tagged Batgirl, Chrononauts, Frankenstein Underground, Groo, Invisible Republic, Loki, Lumberjanes, Mind Mgmt, Moon Knight, Outcast, Red One, Satellite Sam, Shaper, Spider-man, Squirrel Girl, Strange Sports Stories, Stray Bullets, Superman, Tuki, Wonder Woman, X-men. Bookmark the permalink.