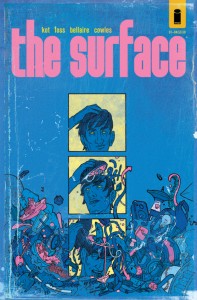 Quite a few first issues again this week, with an interesting mix of sf, fantasy adventure and comedy. The Surface is sf, set in a near-future where everyone’s high-tech enough that the fad is “livelogging,” where you wear cameras and mics 24/7, and your whole life gets downloaded — but not everyone is satisfied absorbing all that digital data, and there’s another reality trying to break through…. Ales tried something similar to this with last year’s Change, although this new series seems a lot more linear, and more carefully built (it’s packed with concepts, extra text pieces and other data), with Foss’s Geoff Darrow-like art a good match for it. If the point of a first issue is to intrigue readers enough to get the next installment, this does its job. 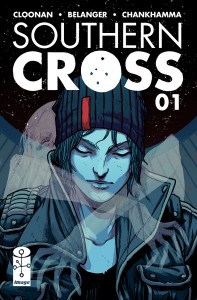 This is a lot more classical sf, with the main character a tough, scruffy woman who’s taking a space tanker (the “Southern Cross” of the title) to Saturn’s moon Titan, to investigate the death of her older sister at a big mining colony there. Cloonan’s good at hardscrabble, earthy characters (especially when they’re in contrast to the high-tech environment of the tanker), and does some decent world-building in this first issue;  Belanger’s got a style not that far from her’s, so they make an effective team; Image has been providing a platform for a lot of smart, well-constructed sf books in the last few years, and both this and Surface fit right in.

The hook here is a team of special-ops soldiers, sponsored by the Catholic Church, who make forays into hell (or “hells,” since apparently there are a bunch of different ones) to rescue wrongly-condemned innocents (like, kids possessed by demons, whose souls end up in the depths as the demons get to use their bodies up here). Fair enough, and Churilla’s art looks a lot like, say, Guy Davis’s; the combo of military vs. monsters is reminiscent of what you’d see in a book like B.P.R.D. My one quarrel is that the plot and characters, while solidly built, don’t seem much different than any team of soldiers going anywhere dangerous;  you could take this story and transfer it to Sgt. Fury and the Howling Commandos against the Nazis, and pretty much have the same comic. 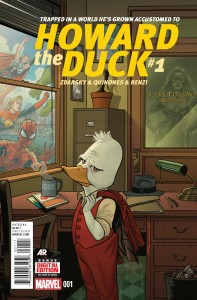 Two comedy books, both revivals. HTD has the built-in disadvantage of not being by Steve Gerber and Gene Colan, and not coming out in the ’70s; it was very much of its time and creators, and seems a little lost otherwise. Given that, this is about as good a Howard book as we’re likely to get; 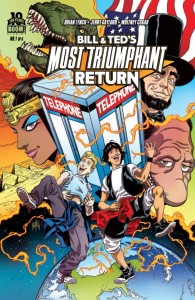 Zdarsky keeps the amusement level reasonably high, and Quinones offers a decent-looking Howard. Other than the interest caused by that ten-second cameo in the Guardians of the Galaxy movie, though, it just isn’t clear why this book should exist. So too for Bill and Ted: they were decidedly a product of their late-’80s/early-’90s milieu, and why modern readers should care about them (instead of just looking at the ’90s comics, by the great Evan Dorkin, which are still all reasonably priced) is not a question that the new version’s creative team manages to answer very well here. 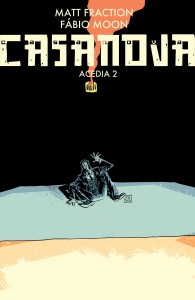 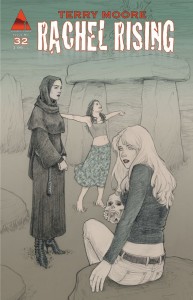 The better indy titles this week (yes, Astro City counts, even if it’s under DC’s Vertigo line now…). Casanova benefits from Fraction’s obvious love for his original break-out hit; its dimension-hopping… well, “hero” might be stretching it, although he’s trying… has amnesia and is working as a chauffeur for a Hollywood big-shot — which doesn’t mean 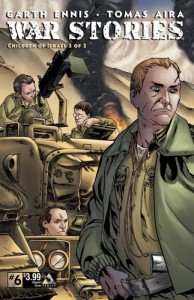 figures from his past aren’t still trying to kill him. This offers an all-star creative team, both on the main story and the back-up; besides the very pretty-looking art by Moon, adding in his brother Ba and Pulitzer Prize-winning writer Chabon is more than enough to make the sale. Rachel Rising takes something of a breather this issue (only one on-page death, plus an off-camera decapitation and a suicide…), as it spends some time ramping up the atmosphere, in Moore’s quietly-skillful style, and establishing just how pervasive the evil that’s 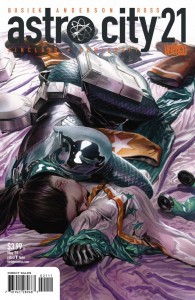 infected its small town has become — all the better for the main characters to deal with it eventually; it’s a minor-but-necessary chapter in a much larger and more engrossing work. War Stories, meanwhile, finishes its three-parter about an Israeli tank crew during the Yom Kippur War; Ennis brings his regular passion for historical accuracy, keen strategic analysis, and a fascination for what makes a good soldier; what he and Moore have in common is that both have been doing stand-out work for so long that we take them for granted. That’s even more true of Astro City, which is also concluding a three-parter; Busiek and Anderson have been offering quality superhero stories, off in their own little corner, for over two decades, and even on its own this shows how there’s no one better at it. 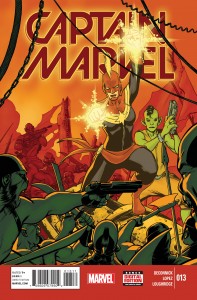 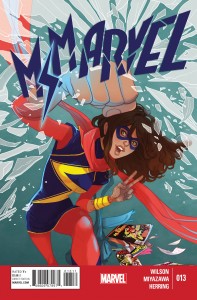 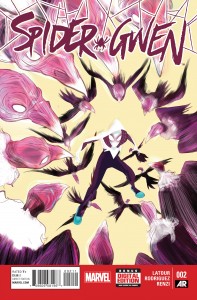 A whole bunch of Marvel books are left, so let’s break them into two groups: first, the two title Marvels, Captain and Ms., continue to stand out from the pack, thanks to their 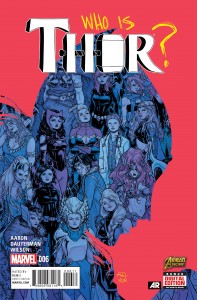 modern-looking art, strong female main characters and smart scripts; Captain Marvel wins out by a hair, because DeConnick and Lopez make such a smooth, irresistible team (plus, note this issue’s writing assist for Warren Ellis — an advisor on some of the hard-science stuff?). Ms. Marvel gets some points for cuteness (although its adolescent hero can be tough too), and for Miyazawa’s polished manga style, which suits the book’s tone perfectly. Spider-Gwen tries for the same style, and the same audience, but falls a little 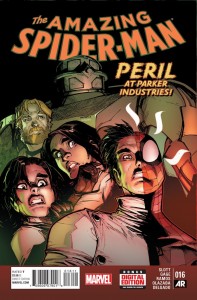 short; I’m not sure whether it’s the alternate-universe setting (which makes it seem to “count” less, and leads to a bunch of distracting insider plot points like Frank Castle on this world being a tough cop), or just that it all seems a lesser version of Spider-Girl, but at this point it’s only got one more issue to convince me to keep buying it. Thor, on the other hand, knows exactly what it’s doing, and is rolling ahead merrily as a hit book: the mystery of who’s holding the hammer deepens this issue, and watching all the Asgardian in-fighting (especially filtered 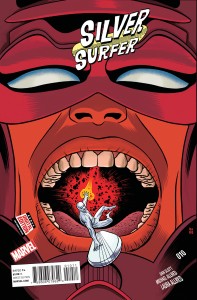 through Dauterman’s delicate, precise lines, well-suited to the mythological setting) is fun; the reader doesn’t even notice that not much action actually happens, especially given the final-page splash guaranteed to bring everyone back for a big battle next issue. Amazing Spider-Man, meanwhile, is back to normal after the long “Spider-Verse” arc, with Ramos back on pencils, Peter Parker juggling super-villains, relationships and business-owner responsibilities, and the same well-honed sense of fun and drama as always. Silver Surfer continues to go cosmic-big, 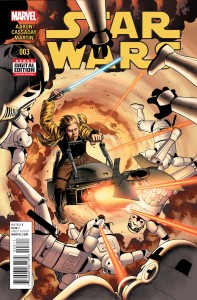 with Galactus threatening a planet and the Surfer hard-pressed to do anything about it (last issue, he surfed a moon into the guy, and it did no good); as you can see from the cover, the Allred art is more than up to the task of making this all look astonishingly good (and, as I remind everyone almost every week, click on the pictures to see a more full-size version of them). That leaves Star Wars, with the Aaron/Cassaday team wrapping up its first story this issue, one that, in tone and energy and fun with its characters, could have fit easily into the Marvel Star Wars comic that came out right after the first movie, when the cast still had the shock of the new and no one but George Lucas knew what lay ahead for them. 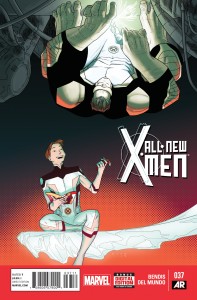 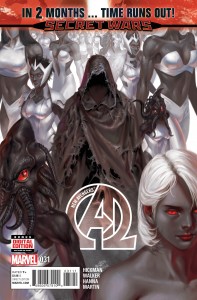 The final four Marvel books: All-New X-Men is the best of this lot, although the Iceman/Beast cover has nothing to do 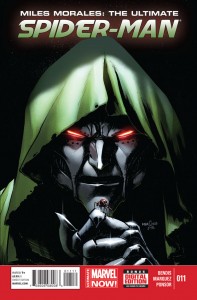 with the inside, in either story or style: what’s there involves Emma Frost mentoring the young Jean Grey by taking her to Madripoor and making her survive without her psychic powers (but still with her telekinetic ones). Mike del Mundo contributes a striking painterly, soft-edged art technique; too bad fans who might be attracted to it (or those two characters) won’t know anything about it by glancing at the book’s outside. New Avengers sees Dr. Strange in the far reaches of the 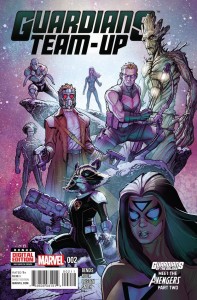 multiverse, eventually encountering a very different kind of doctor, as this and its sister title hurtle to their apocalyptic finale in six weeks or so, and the Beyonders loom ever closer. Miles Morales has only one more issue after this one, as the Ultimate earth faces its own apocalypse (reader fatigue and slipping sales being even more powerful than Beyonders), and Bendis will wrap up a fifteen-year run on books with “Ultimate Spider-Man” in their title. Finally, Guardians Team-Up, also by Bendis, offers the conclusion to its two-part team-up with the Avengers, and disappoints because it’s not, like the first issue, by the great Art Adams; that may be unfair to Roux and Leisten, who have their own, more minor, charms, but the change of styles just kills any momentum that an otherwise-average script can’t sustain by itself.

With 40 years of experience in comic reading, collecting and reviewing, English Professor Phil Mateer has an encyclopedic mind for comics. Feel free to ask Phil about storylines, characters, artists or for that matter, any comic book trivia. He will post your questions and answers on the AABC blog. His knowledge is unparalleled! He is also our warehouse manager, so if you are looking for that hard to find comic book, ask Phil!
View all posts by Phil →
This entry was posted in New Comics, Reviews and tagged Astro City, Avengers, Bill and Ted, Captain Marvel, Casanova, Guardians of the Galaxy, Hellbreak, Howard the Duck, Ms. Marvel, Rachel Rising, Silver Surfer, Southern Cross, Spider-Gwen, Spider-man, Star Wars, The Surface, Thor, War Stories, X-men. Bookmark the permalink.