Week three of DC’s moving-cover extravaganza brings ten more comics; this week, you don’t even have to click on the covers to see them move (assuming I embedded them correctly…)!

This is the conclusion to a two-parter started over in Justice League United last week, wherein a super-villain prison on Mars (wardened by the Martian Manhunter)  has a breakout, courtesy of a very powerful and crazy Captain Atom, and the Futures End version of the Justice League (plus a couple of members of the Legion of Super-Heroes) have to fight him and his bad-guy cohorts. It’s not bad; Lemire, who’s a good writer, is able to juggle the large cast, drop a number of hints about the FE timeline, and bring everything to a satisfying conclusion.

Batman fights the Heretic (the Talia-led assassin who killed Damian), while ordering Alfred to keep Duke, the “new,” more grown-up Robin, from interfering. Nguyen contributes decent-enough art, mostly fight scenes, although somebody didn’t get the “Alfred” memo — he looks about fifty years older here, not five, and completely unlike his appearance in the other FE bat-books this month. Fawkes has proven competent enough at the challenge of writing a done-in-one story for these five-years-later issues, one that establishes the characters’ history and resolves a plot in twenty pages (he contributes two this week, with this and Pandora, and has done four or five total so far), although this one’s pretty lightweight; nice-looking cover, though.

This issue wastes little time establishing background: as the cover suggests, Batwoman is now a vampire, and her albino sister is now a reluctant good guy trying to stop her, and the rest of the issue is a running battle; Andreyko is one of the few writers so far to decide, hey, if this future-thing isn’t going to “count,” let’s go for broke and really mess up the main character. That, and the good-looking Masters art (Batwoman readers have come to expect stylish layouts and pencils ever since J.H. Williams III (and, later, Amy Reeder) were providing the art in its early issues) makes this a quick-moving and entertaining read.

The future-Kyle White Lantern is going from world to world, blissing everyone out and eliminating war, but leading to one of those Star Trek-style “what about free will?” moral dilemmas, and, on his latest conquested planet, he uses a girl who’s rebelling against his influence to test himself and the rightness of his task. Neves does the art and some of the coloring, which, considering all the white glare, is a good idea (it’s hard to argue with the synchronicity of someone named “Diogenes” doing a White-Lantern story), and this is another book that manages to resolve its main character’s arc in a fairly final way, while leaving the door open for later stories too. Like most of the books so far this week, it’s helped by a cover that makes good use of the dual-image gimmick.

This is another book where it’s kind of hard to figure out the timeline continuity — the events that happen to Batman here are serious enough that it must occur after, say, Batman and Robin and the last few weeks’ Batman and Detective — and there’s no actual Superman in it, since he’s still in hiding. That’s the peg, in fact: where is he, and why isn’t he helping fight the likes of Metallo, and leaving it to Bruce instead? Pak’s the regular writer on this title, so that helps the character bits, although Batman doing a one-sided running dialogue with an absent Clark is kind of like Clint Eastwood debating that empty chair….

This is another two-parter, starting in Wonder Woman and ending in Superman and…; Soule writing both books makes them blend well together (so does being able to read them both in one week), and the larger canvas lets him tell a larger story, with the first chapter in Wonder Woman showing a Diana

as the Goddess of War, nearing the finale of a years’-long fight with Nemesis that’s cost her almost everything, and ending with the appearance of… well, the second part/conclusion being in Superman and Wonder Woman should give you a clue, although there are at least two major twists involved. Morales and Sears both contribute  good art, although their styles are different (and the Sears looks a little sketchier and more rushed), and the story itself might be the best of these books so far, with another ending that’s actually a beginning. Will it echo in the pages of the Futures End mini-series? Guess we’ll have to wait and see….

With a new Titans team consisting of Earth-2 versions of Tempest, Kid Flash and Klarion, plus an Earth-1 Heretic (there’s more than one, apparently, and this one’s a good guy), and a fifth player who comes on near the end, and turns out to be a distaff version of another retired Earth-1 hero, this turns out to be a pretty-decent book. Pfeiffer provides a fast-moving, well-paced and fun origin story for the new team, and Smith’s art handles all the different characters and action well. This is one of the few future-version stories that I’d actually like to see happen in the “real” comic.

This is another book by the regular title’s writer (which usually helps the continuity and voice — assuming that you like the regular title, anyway), and it focuses almost entirely on a solo Jason Todd/Red Hood, who’s dealing out vigilante justice to bad guys after the break-up of the Outlaws. Kolins and his always-well-composed, carefully-rendered art help quite a bit, although Lobdell is one of those solid-but-unspectacular writers (he reminds me of Chuck Dixon) who always turn in a reasonable story that hits the expected buttons, but almost never rises above that. Of course, for a one-off, doesn’t-quite-count, bought-it-for-the-cover story like this, that’s about as good as you can hope for anyway, so this actually turns out to be an above-average contribution to the week’s books

Like Phantom Stranger, this is a Futures-End version of a comic that’s already been cancelled (although both characters will be featured in a solo Trinity of Sin title), so there’s a lot of summing-up of the character’s ultimate destiny, infinite turns of the wheel of fate, blah-blah-blah etc. As someone who never read the original book (like most of you, apparently; otherwise it wouldn’t have been cancelled…), I know little about Pandora, but this does a good job of condensing her history, both past and future, into a 20-page story that makes at least some sense — and, again like Phantom Stranger, offers one future-timeline path that lets the character rest in peace.

Again, the DC covers crowded out everything else, but it was another great week for comics, so let’s at least list everything, and do a quick take on each: 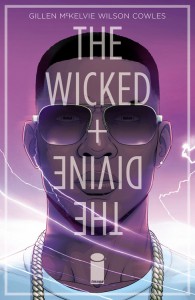 If you think you’d like neon-colored pop-culture ruminations on death wrapped around a story of god avatars, here you go. This issue establishes Lucifer as the most interesting character (everybody since Milton has known that), and continues to stake its claim as one of the best new series out there — no surprise, with its well-regarded and well-matched creative team. 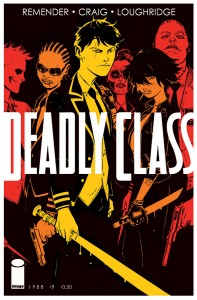 The start of a new arc (if you didn’t get the first six issues, look for the trade) of this story about a training school for teenage killers. Very very dark, surprisingly funny in places, and sometimes heartbreaking: in a year where Remender has established himself as a top creator, this was his breakout book. 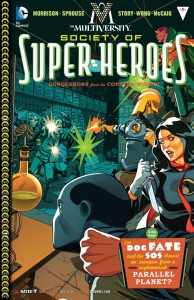 The first stand-alone one-shot in Morrison’s everything-including-the-kitchen-sink take on the 52 DC universes, with an earth including Immortal Man, Vandal Savage and a JSA-like Society of Super-Heroes. As with his similarly-constructed Seven Soldiers of Victory, this tells a fairly-complete story, but also acts as one piece of a bigger jigsaw puzzle that will be resolved in the bookend Multiversity #2.  Chris Sprouse, Morrison and super-heroes: you can’t pass this up…. 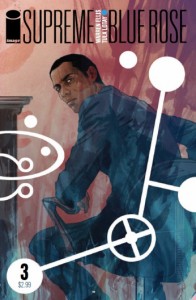 Both of Ellis’s ongoing series arrive in the same week (I’m not complaining…): Trees continues its science-fiction combo plate of implacable towering alien constructs and smaller-scale character studies around the world, which in this issue look like they may start to come together; Supreme is a dreamlike meditation on storytelling (it’s like an Ellis merged with Neil Gaiman), with Lotay’s shockingly-pretty, surreal art demanding that you buy it. 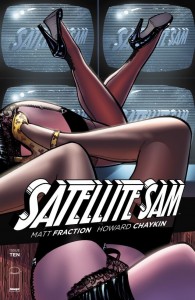 Chaykin solo on the Shadow, in a post-WWII era where he’s considering retirement, plus Chaykin providing the art for Fraction’s same-decade take on the early TV industry, mixing murder, sex and proto-media power plays on a stage that has yet to see a Civil Rights movement or a flower child (hell, there aren’t even any beatniks just yet…).  His art is so lush, so precise and line-perfect, that it brings the 70-year-old time period to life right before your eyes; he’s become one of our modern masters of comics art, and these books help to show why.

The Purple Man has had a bunch of kids (he can make anyone do whatever he wants; do the creepy math), and they have his powers too. What happens next? Waid and Samnee blazed the trail that let Fraction and Aja create a retro-modern hit with Hawkeye; this first of a two-parter is a good time to look in on DD and see the clean art, clever plotting and knack for continuity mining that made it so influential.

Two from Bendis, both involving Miles Morales. A-N X-M‘s cover is something of a cheat, since the story actually has “our” Kitty Pride in his universe, not vice versa; she and the other A-N X-M have been scattered through time and space courtesy of a newly-powered, panicky teleporter, and the whole comic is scenes of the various cast trying to figure out where they are, what to do, and so on. MMtUS-M has no Kitty, but Miles dealing with the aftermath of a fight with the Green Goblin, and the maybe-return of the Ultimate universe’s Peter Parker. Bendis has been writing USM in its various incarnations for over 14 years now, one of the longest runs of any writer on any mainstream comics title, and he almost always delivers solid stories that are worth a look: so, look.

With 40 years of experience in comic reading, collecting and reviewing, English Professor Phil Mateer has an encyclopedic mind for comics. Feel free to ask Phil about storylines, characters, artists or for that matter, any comic book trivia. He will post your questions and answers on the AABC blog. His knowledge is unparalleled! He is also our warehouse manager, so if you are looking for that hard to find comic book, ask Phil!
View all posts by Phil →
This entry was posted in New Comics, Reviews and tagged Batman, Batwoman, Deadly Class, Future's End, Green Lantern, Justice League, Multiversity, Red Hood, Satellite Sam, Shadow, Spider-man, Supreme, Teen Titans, Trees, Wicked and the Divine, Wonder Woman, X-men. Bookmark the permalink.