Last week for the DC special covers, so let’s check them out (now that we’ve figured out how to animate them automatically), and then take a quick look at some of the best of this week’s other offerings:

This Futures End one-shot comes the closest of all of them to just being a regular issue of the comic: it’s by the same creative team, and its tongue-in-cheek style means it doesn’t care about continuity anyway (a good thing, since the Futures End Suicide Squad #1 a few weeks ago had a long-imprisoned, Hulked-out Harley getting blown to bits — a development that would have made this a pretty boring issue), so when Ms. Quinn runs into her clown-faced ex-puddin’ on a small-but-volcanic Pacific island, and he has his old face back, everybody just rolls with it, and lets the hijinx commence. If you like the Palmiotti/Connor version of this character (and it’s become a definite cult hit, so a number of you do), you should like this issue just fine.

Since The Flash can time-travel, incidents here look like they’ll end up affecting events in the Scarlet Speedster’s “real” DC timeline, making this another Futures End title that readers of the regular comic will want. Booth and Rapmund are a solid superhero art team, and between their lots-of-splash-pages action and Andrew Dalhouse’s eye-catching, neon-candy coloring, this is an, um, flashy book, the kind of comic a ten-year-old could pick up and be fascinated by.

The House of Mystery has been floating around in Limbo a long time, apparently because Zatanna screwed something up many years ago, and she, The Demon, Black Orchid, Nightmare Nurse and Cassandra have been trapped there ever since. Things happen, and they try to get out, and there’s lots of talking and some fighting, and… well, that’s about it, actually; you can almost see the creators sighing and just grinding out a story because they need one. The universe balances out, though — this issue may have one of the more mediocre stories, but it also has one of the better-looking covers.

Three written by Dan Jurgens. The Booster Gold is the best

— first, because Jurgens created the character and has been involved with him for almost 30 years, and graces him with a light, familiar touch that other writers can’t match. In addition, Booster’s time-traveling abilities mean this is another book that has ramifications in both the Futures End timeline and the regular DC one (and, subtly, the pre-New 52 version, too), while the story itself looks to be setting up some major plot points in the FE weekly series. Add in the variety of artists (Booster’s jumping through time, so each era gets a different creator, with the opening Victorian-era sequence by Moritat the best), and this is one of the better of these cover-stunt comics. Aquaman/Others

concludes the story from the FE Aquaman #1 from a couple of weeks ago, and takes some time to set up a new hero — but, as with all of these five-years-later books, whether that will make any difference in the “real” timeline remains to be seen. It’s perfectly OK in art and story, although not much above average. Finally, Superman isn’t really about Clark Kent, but about Billy Batson (who’s been masquerading as Superman in the FE weekly, and was recently outed by Lois Lane), and his decision about whether to continue the ruse. It’s notable mostly for the Weeks art — he has a solid sense of composition, and a real command of his inking line that lends itself particularly well to expressions and anatomy and reminds me of Joe Kubert: not a bad excuse to take a look at the book.

This has ties to both of DC’s weekly books, since it builds on Selina-centric events occurring now in Batman Eternal, and projects them five years into the future. It’s pretty good (especially if you like Godfatherly, mob-oriented stories) with decent-but-not-striking art by Oliffe and a resolution that makes sense for the character, and should satisfy readers (as with many of these FE specials, it’s not one that DC editorial would likely allow for the character in “real life,” either, so this comic is just the right place to explore it).

Betcha this ends up being the rarest of all of the lenticular-cover issues, since it’s based on the lowest-selling, and most recently launched, regular series. Too bad for readers who don’t get it, because it’s a pretty-well-told zombie-apocalypse tale, with very good-looking painted art by Hampton: reason enough to buy it, even if it doesn’t ever go up in value.

Let’s end with the two Green Lantern books: Sinestro is a typical story of that character, beginning with him ringless, trapped on an “inescapable” prison planet, and ending with him escaping and getting a new piece of jewelry — but not

necessarily the one readers might expect; Lima shows a knack for the kind of grim, shadowy art that’s required of the story and its main character. Red Lantern offers a story about the end of that particular Lantern hue; as with Sinestro, main character Guy Gardner ends up with a different-colored ring than before (something the cover makes clear), but it’s a much more optimistic story, with particularly effective coloring from Gabe Eltaeb (hmm… that’s “Beatle” spelled backwards — did Richard “Ringo” Starkey actually color this comic? That would be oddly appropriate…).

Twenty years of this annual Hallowe’en title (and try finding a complete set of the early issues…), and it’s still going strong: four stories, all dealing with Springfield and its denizens fighting off various forms of a zombie apocalypse, spread over 48 full-color, no-ads pages for $4.99. No cool big-name or indy guest artists or writers this year, but the usual Bongo gang has become very good at presenting the comic adventures of the title clan and their sprawling cast of friends and neighbors over two decades; this comic offers the most macabre fun you’ll have all week. 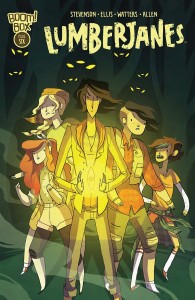 This title, about a sharply-delineated group of kinda-Girl Scouts at a summer camp, continues to be a lot of fun; the woods surrounding the camp hold a number of Indiana Jones-type mysteries, both natural and mythological, and the combination of Carl Barks-style adventure and preteen-girl play turns out to be surprisingly effective. Six issues in, it’s clear there’s an overarching plot driving the individual stories, and that the creators are building a smart, fast-paced tale with a lot of heart. 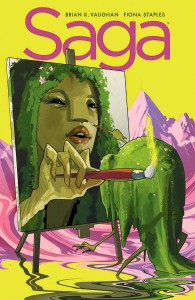 Everybody already knows this is a good comic, right? I don’t have to tell you how good Vaughan is at keeping the plot fresh and startling, and making the characters relatable and worth rooting for (with even the “bad” ones having recognizable motives and yearnings), or how astonishing Staples’s art can be (just look at that cover — and then look again, and try to decide which part is an optical illusion, and how something that alien can look so familiar and beautiful)? OK, then… 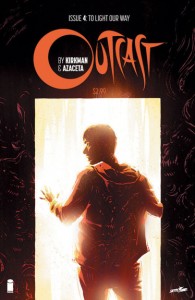 We’ve talked about this book, too — Kirkman’s going for the slow build here, introducing characters and focusing on the creepy atmosphere, the occasional hints about Kyle’s horrific past, and, every so often, a moment of violence or dread; Azeceta’s art has a small, precise, personal touch that’s perfect for that tone.  As with Walking Dead, this is more about the people than the supernatural threat (zombies there, demonic possession here), but it’s the ghouls that bring in the crowd and pay the bills; next issue looks to be an extended exorcism within a prison, so the action quotient should be upped quite a bit. 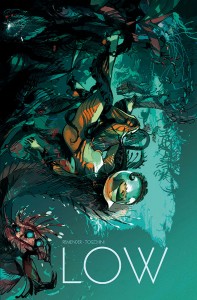 An expanding sun having rendered the earth’s surface uninhabitable, humanity’s living deep under the ocean, with time and air running out — but a signal indicates that a space probe has crashed on the surface, and may have news of another, livable world. This is a book about optimism in the face of despair, with an indefatigable heroine and really wonderful art by Tocchini — the last few pages, as two main characters rise slowly through a riot of undersea life, give him a perfect chance to show off his skills.

Doom, on a trip to the far future, encounters Old Evil Loki, decides he’s a threat, and then resolves to combat it by capturing and neutralizing Young Not-As-Evil Loki in the present: two magician-tricksters, neither one quite a bad or good guy, playing an extended strategy game for keeps. There’s a lot of Gaiman-like (or Gillen-like) talk about stories, and some lush, effective art from Coelho, and both help to pull this out of the ordinary and make it a readable, interesting book. 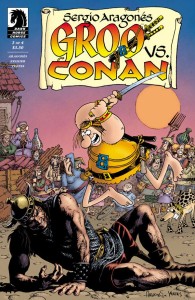 For a deliberately-funny book built on a ridiculous premise, this has a lot to say about stories, too: in this issue, Groo kills Conan — but it’s being told by an unreliable narrator, who in turn is being imagined by the feverish mind of a concussed cartoon-universe Sergio Aragones, who’s actually being written about by Mark Evanier, based on the drawings by this world’s Sergio…. actually, in the book, it all makes perfect sense, and when Conan decides to fight Groo because no one could really be that stupid — he must be evil, and acting stupid as part of some master plan — the already-dizzy reader is perfectly happy to roll with that logic. 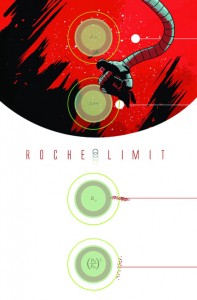 I wanted to like this more than I did — it’s another sf book from Image, and the premise involves a remote space colony orbiting an “energy anomaly” that’s like a black hole, but conveniently without the massive gravitational pull (allowing the creators to have their colony orbiting it without getting sucked in — which feels like a cheat, although if there’s an actual thought-out scientific explanation to this other than “it’s easier to tell the story this way,” I’ll stand corrected). This is all background for a crime/suspense story that could have been told anywhere, really, except that the space setting allows for a few exotic elements; fair enough, except that the sf/police procedural mashup was already done well once this year, in The Fuse, and it isn’t clear that this is adding anything to it, either in the writing or the art. Only one issue isn’t enough time to tell, so it’s probably worth a look right now, but this is going to need to become impressive fairly soon if it wants to retain an audience.

With 40 years of experience in comic reading, collecting and reviewing, English Professor Phil Mateer has an encyclopedic mind for comics. Feel free to ask Phil about storylines, characters, artists or for that matter, any comic book trivia. He will post your questions and answers on the AABC blog. His knowledge is unparalleled! He is also our warehouse manager, so if you are looking for that hard to find comic book, ask Phil!
View all posts by Phil →
This entry was posted in New Comics, Reviews and tagged Aquaman, Booster Gold, Catwoman, Flash, Future's End, GI Zombie, Harley Quinn, Justice League Dark, Loki, Low, Lumberjanes, Outcast, Red Lanterns, Roche Limit, Saga, Simpsons Treehouse of Horror, Sinestro, Superman. Bookmark the permalink.