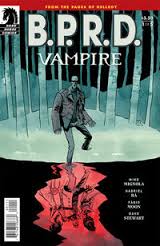 This sequel to B.P.R.D.: 1947 offers the return of the Brazilian twin brothers Ba and Moon (their last work was the magic-realist Vertigo mini-series Daytripper), and between their evocative art and Mignola’s well-staged, every-word-counts writing, this is one good-looking, creepy horror book. You really don’t need to know any more than that, so you?

Another great writer/artist team (everybody’s read their two Phonogram series, right? The second one, especially? The one I told you about years ago? The one that mixes comics with a deep love for the redemptive powers of British pop music?), and here they’re having a lot of fun with every teen’s worst nightmare: demon parents, who only want to suck out your soul because it’s for your own good. Mix in the interplay between the characters, and the delightful machinations of the sort-of-good, sort-of-bad Kid Loki, and this is one of the better Marvel Now! reboots. It’s currently operating a bit in the shadow of some of the bigger guns, though, so buy it and support it and let these guys keep telling their stories for a good long time.

The aftermath of Damian’s death, as everyone sweeps up the broken pieces and Leviathan/Talia seem to have won. Burnham continues to deliver clear, stylish art that’s very good at even the subtle emotions — a good thing, since Morrison’s script requires many things to be left unsaid, and indicated with just a glance or expression (they get more than I would have thought possible out of the words “bat-cow”), and, like his Action, this will merit an all-at-once reading when it’s all over.

This continues a series of one-shot tales dealing with the title character’s long, checkered past, this one set in the Wild West in the 1880s, with her wearing a Clint Eastwoodish Man-With-No-Name poncho; Phillips gets to draw traveling magic elixir salesmen, Indian assistants, grizzled owlhoots and lots and lots of gunplay, so Western fans will have a blast. It’s a well-told, well-drawn book, typical of this series — in many weeks, it would have led the list, but a lot of good comics came out Wednesday (we’ve had a lucky year for those so far, haven’t we?) 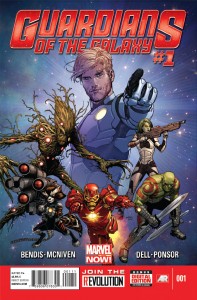 If anyone needed evidence that Bendis is the top writer at Marvel, here he is, on the company”s biggest new movie-coming relaunch and their big yearly event mini-series, both in the same week. Guardians is the relaunch, with its Avengers-tied-in movie due next year, and it’s just about what you’d expect: space opera, revolving around the Earth being declared off-limits to the rest of the universe 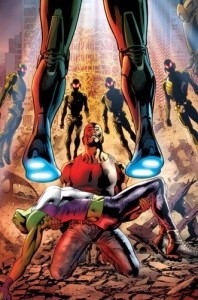 and the Guardians having to protect it (not that you can get all of that out of this first issue, mind you: it’s typical leisurely Bendis storytelling). So far, the addition of Iron Man looks like a canny ploy, and the McNiven art is rich, attractive and more than up to all the pyrotechnics and alien inventiveness required. Age of Ultron is similarly blessed with its art (Hitch is just as solid, fun to look at, and unafraid to put in the work required to draw dozens of characters and lots of background detail as McNiven), and similarly decompressed; for those of you keeping score, Captain America is now up and talking, although he hasn’t actually left the room yet — but other characters do, as the good guys continue to sacrifice themselves and slowly get winnowed away, leading to an effective last-panel reveal. 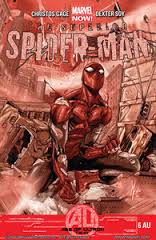 That “AU” after the number indicates an Age of Ultron tie-in, and the last-panel reveal in that book gets covered as a plot device in this one, too — while Doc Ock/Spidey’s ability to anticipate another villain’s moves, and his arrogance in thinking he can defeat them, make this an effective companion to the mini-series, and help to lessen the annoyance readers might feel at having their “regular” plot hijacked by the event. 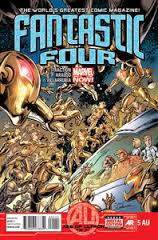 Age of Ultron makes its presence felt here, too — but only Fantastic Four (Allred’s unique vision in FF is, blessedly, not affected). Fraction proves very clever at temporarily diverting the group from their extra-dimensional trip, and wrings some pathos out 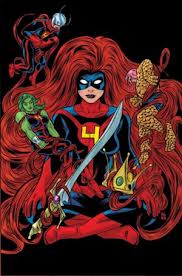 of their robot-induced plight, although getting them to the situation already shown in the mini-series (only Sue is, apparently, alive) makes it abundantly clear that a massive reset button is looming (as if there were any doubt). FF, meanwhile, continues on its own merry way, with Old Johnny going nuts, Alex Powers paying a call on the Doom castle, and, in a last-panel reveal, Medusa showing that her odd behavior is related to her current involvement with the first super-group we ever saw her affiliated with (no, not the Inhumans; the one before that….). 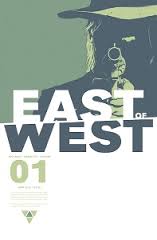 A new Hickman indy series — like Manhattan Project, it’s a twisty alternate-timeline tale, one where the Civil War stalled out without resolution and the former US in 2064 is divided into a Union, a Confederacy, an Indian nation, a Republic of Texas and a number of other fragments. It’s really about… something else, though. What? I have no idea — it’s Hickman, remember — but it involves a ghostly gunman with big-time supernatural powers; the Western theme, and the sense of shadowy supernatural forces just behind the scenes, reminds me of Stephen King’s Dark Tower series: a good thing, and a hopeful sign of the book’s continued success.

DC’s seemingly-yearly sf anthology offers nine eight-page stories (most involving time travel, as the title implies), and some intriguing creative work: the lead-off tale, for example, is written by Damon Lindelof and drawn by Jeff Lemire, and involves Rip Hunter, Time Master, and a clever play on his name. There are also two stories involving traveling back in time to assassinate Hitler (with very different outcomes), a Gail Simone offering with appealingly-cartoony art by Gael Bertrand, a Peter Milligan/M.K. Perker ghost story with a twist, a Matt Kindt effort that’s… um, very Matt Kindt (which is to say, both very good and like no one else), a Ray Fawkes/Andy McDonald piece that wouldn’t have been out of place as a hard-science space story in a ’50s magazine like Galaxy, and a couple of other things too: more than enough to justify the book’s $7.99 price tag, and to let sf fans hope that DC will keep producing these.

It’s clearly Garth Ennis’s world; we just read his comics in it — four this week, and all involving in some way his interest in the military, and those who sacrifice for it. Crossed continues his latest serial in that title, as a group of British soldiers take desperate steps to eliminate the infected madmen from their island and give the rest of the world a small, if fighting, chance; it’s doubtful if it will end well, 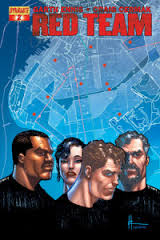 but it’s fun to watch them try. Battlefields follows a previous heroine from this sporadic series, the Russian aviatrix Anna Kharkova, as she deals with being a woman fighter pilot in the post-WWII Soviet Union, and reteams Ennis with his sometimes-Boys artist Braun. Red Team is actually about cops, but their formation of an illegal special-ops unit to take down otherwise-intouchable bad guys, and the strategies and moral implications involved, fit right in here. Fury brings its grizzled

hero up to 1984 and the Contras in Nicaraugua, and features the Barracuda character from Ennis and Parlov’s Punisher run; it’s got the best art of the bunch (although all four have their moments), and the best look at the murky moral landscape that people authorized to shoot other people (whether as police or as soldiers) have to navigate to do their jobs and still be able to look in the mirror at night.

This is the second in Rossmo’s Mexican-themed horror trilogy, and like the first has him drawing tales by three different writers, all in different styles. Rossmo takes obvious pleasure in his art, and the book’s larger size (about 7.5 x 10.5 inches) lets it breathe, and shows it off to good effect. Springtime isn’t quite the season for the macabre, but there was a good horror comic at the beginning of this list, so it makes sense to bookend it with one, too….

With 40 years of experience in comic reading, collecting and reviewing, English Professor Phil Mateer has an encyclopedic mind for comics. Feel free to ask Phil about storylines, characters, artists or for that matter, any comic book trivia. He will post your questions and answers on the AABC blog. His knowledge is unparalleled! He is also our warehouse manager, so if you are looking for that hard to find comic book, ask Phil!
View all posts by Phil →
This entry was posted in New Comics, Reviews and tagged Age of Ultron, Batman Incorporated, Battlefields, BPRD, Crossed, Dia de los Muertos, East of West, Fantastic Four, Fatale, FF, Fury, Guardians of the Galxy, Red Team, Superior Spider-Man, Time Warp, Young Avengers. Bookmark the permalink.