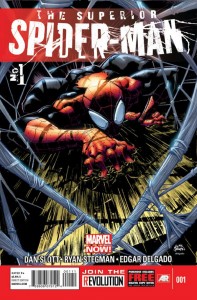 You know how some books have an intriguing concept or creative team on paper, and then in practice turn out to be not so good? Well, thankfully this comic is the opposite: an idea with the potential to be really stupid, but that in execution turns out to be surprisingly effective. I’m assuming that at this date spoilers aren’t necessary to sketch the situation: Otto Octavius, Dr. Octopus, was dying and figured out a way to imprint his brain waves on Peter Parker (and vice versa), in effect switching minds with him. Peter, trapped in Octavius’s dying body, couldn’t reverse the process, but at the end of Amazing Spider-Man #700 forced Otto to experience all of his memories — Uncle Ben, great power, great responsibility, blah blah blah — which converted Octopus-in-Peter to swear to try his best to be a hero, even as Peter-in-Octopus then “died.”

Everybody got that? The effect is that Spider-Man is now, mentally, Dr. Octopus, but one who’s trying to be a good guy. Superior Spider-Man #1 explores how that changes things, and the big one is that Spidey is no longer the world’s most neurotic hero, but the most megalomaniacal — Octavius is nothing if not confident of his abilities, sure that he’s better than everybody else. He’s also clever and pragmatic: faced with a reconstituted Sinister Six, he fights them at first, but then, on starting to lose, simply runs away (where Peter would have kept punching), and then later uses brains and careful preparation to outwit, de-power and mop the floor with them. Just when the reader is thinking that this new approach might be better, though, the disadvantage becomes clear: Octavius’s superior mindset gives him no respect for other people’s lives, and he comes close to beating the Sinister Six’s leader to death. He’s stopped by… well, his conscience, in a way, but you’ll have to read the last page of the comic to see what that involves; let’s just say that it’s a clever and unexpected move, at least this soon. I don’t think of Slott as a long-time Spider-writer, but he’s been doing this for a couple of years now, and so far this examination of just what it means to be Spider-Man has been impressive even as it’s gotten the title a lot of publicity: a good job all around. 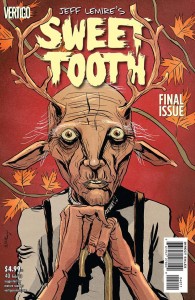 Last issue of the title, and it’s very much an extended epilogue, after the climactic events of the previous month (you can tell where it’s going by the cover). Lemire was largely unknown (except to indy-comics readers) when this series started three and a half years ago, but he’s become a steady and popular writer for DC since then; it’s a good example of how an imprint like Vertigo can be an effective farm team for a bigger company. This book shows some of the pleasures of creator-owned series, too — they can be complete stories, with a beginning, middle, and end, and don’t have to linger on past their expiration date. Lemire’s shown throughout the book’s life that he’s good at character and atmosphere; here, he shows he’s good with conclusions, too. 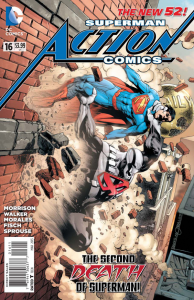 Another book coming to a conclusion — at least of the Morrison era — as there’s only one issue left to the overall story he began with the New-52 Action #1. Among other things, we find out that Doomsday still killed Superman in the “new” continuity, while lots of scattered clues and incidents from previous issues coalesce to threaten a second death. Will the bad guys win? Of course not — but the fun is in seeing how it’s prevented, and next issue’s conclusion should do that well. Some fans have found this run unsatisfying, maybe because it isn’t All-Star Superman — but that wasn’t the point here; the point was to tell a good story, with the careful construction and attention to character and detail that’s Morrison’s trademark, and on that score there shouldn’t be any complaints. 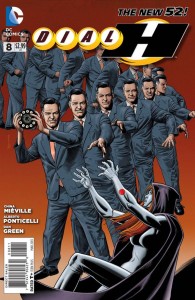 If this title isn’t on your radar, this is a good check-it-out issue: it’s got Mieville’s clever use of characters with powers (The Centipede, who manifests a string of his selves from a couple of seconds apart each; Flame War, who can set things on fire by insulting them) and Ponticelli’s solid, serviceable art, all wrapped around the ongoing conspiracy-theory how-do-the-H-dials-work plot. A year or two, the book’s quirky attitude would have made 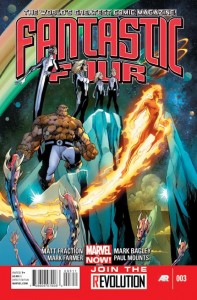 it a Vertigo title, but DC’s using all the superhero-related stuff for the main company now; it’s still got an attractive offbeat flavor, though, and is worth a look. 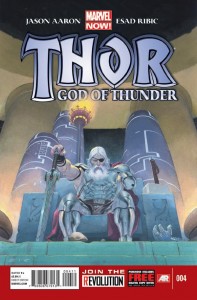 Some of the ongoing Marvel Now! titles: Fantastic Four continues to be the best, because the Fraction/Bagley/Farmer team is so good at the straight-ahead interdimensional superteam adventures that its relating. Thor is darker, more sword-and-sorcery flavored, as Aaron continues to tell a tale that mixes together Thor’s encounters with a serial killer of gods during his present, his Viking-warrior past, and his 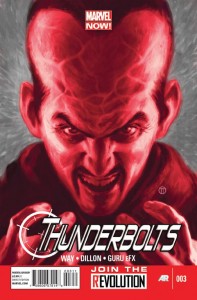 Odinlike future; Ribik’s shadowy, Conan-esque art is a good match for it. Thunderbolts has dropped off the most; the first issue was unexpectedly good, and the Punisher/Deadpool/Elektra/Red Hulk/Venom team is still good for a few grim laughs, but there’s just not that much happening in the plot, and only Dillon’s art is keeping me interested in it right now (I’ve had this problem with Way’s writing in the past: good beginnings and ideas, but disappointing follow-throughs and conclusions). Still, two out of three ain’t bad…. 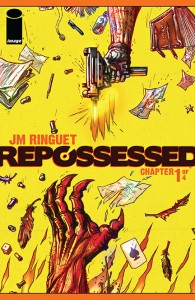 An Image first issue about a team who try to drive demons out of the human hosts they’re possessing; think Ghostbusters, but told with a straighter face (which is not an improvement). Kind of average, especially considering the other indy titles we’ve seen in the last year: in comparison with Prophet or Saga or Mind Mgmt, it just kind of sits there. Still, if you like its brand of B-movie demon-type horror, and would like to see the work of a new talent, here it is. 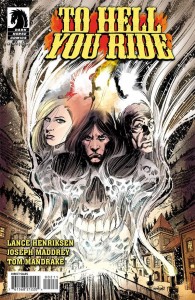 These are the second issues of two other indy books — one from Dark Horse, and another from Image — and both have the same problem: they follow interesting first chapters with almost incomprehensible second ones. That’s a mini-series problem — if the whole thing’s going to be collected into a trade, does every individual comic 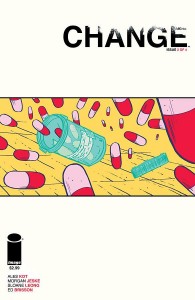 need to stand alone? Well, yeah, if you want to attract new readers with each issue, and neither of these does that: they make no sense unless you’ve read the previous installment. That doesn’t make them bad — the Mandrake art on To Hell, and the Lovecraftian plot of Change, both are good enough to sustain the quality — but it does make it unlikely that anyone spotting their second episodes on the stands for the first time will  bother to give them a try; the old Jim Shooter mantra of “every comic is someone’s first issue” could use a little dusting off in modern times, it seems. 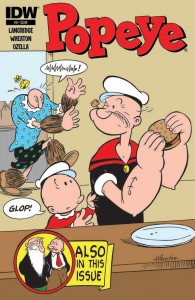 Now, here’s how to make a comic inviting for new readers: nine issues, and every one’s been a self-contained story (two of them, in fact) that are very kid-friendly, with plenty of jokes and action and a careful attempt to make all the characters’ personalities, interrelationships and abilities interesting, funny and clear. Buy one for any preteen you know, and wish that more creators had Langridge’s knack for classically-constructed humor and adventure.

With 40 years of experience in comic reading, collecting and reviewing, English Professor Phil Mateer has an encyclopedic mind for comics. Feel free to ask Phil about storylines, characters, artists or for that matter, any comic book trivia. He will post your questions and answers on the AABC blog. His knowledge is unparalleled! He is also our warehouse manager, so if you are looking for that hard to find comic book, ask Phil!
View all posts by Phil →
This entry was posted in New Comics, Reviews and tagged Action Comics, Dial H, Fantastic Four, Popeye, Superior Spider-Man, Sweet Tooth, Thor, Thunderbolts, To Hell You Ride. Bookmark the permalink.