The Latest and (Mostly) Greatest #66 by Dan!

Another week, another set of reviews where I use the same adjective repeatedly. Let’s do this! 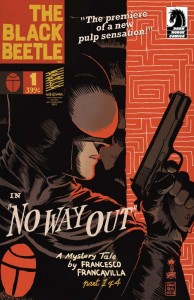 So yeah, I knew this was going to be incredibly sweet based purely on the fact that it was Francavilla doing what he wants. His art style is almost like a noir-cartoon and it’s some of the best that you’re going to find on the comic book stands. So far, in the two issues that have come out of this series, Francavilla has also shown that he can put together a coherent mystery that leaves the reader wondering what comes next. The Black Beetle is his original creation, so basically this book is a completely new concept done in a completely different style, and is like nothing else on the stands. It’s obviously the best of the week.

So whereas Black Beetle is totally new, Daredevil is rebuilding the old in a fascinating new way. This is without a doubt Marvel’s best and most consistent title on the stands right now. Also, the last issue technically counts as the first appearance of the new Superior Spider-Man (check your release dates people!). This issue sees the new Spider-Man meeting up with (and possibly attempting to take down) Daredevil, who has been quite a bit kooky lately. They start to battle, but then Stilt-Man shows up and things get as ridiculous as any story with Stilt-Man can be. It’s great stuff, and Samnee has an action-yet-cartoony (similar to Francavilla) that makes this a fantastic read month in and month out. Great stuff. 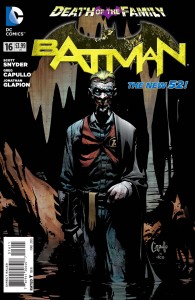 The trio of bat-books this week all tell effectively the same story in a series of different ways. The adjectiveless main title is the main part of the story and the best of the three. Joker confronts Batman directly in Arkham Asylum and the weird twisted moves that Joker makes keep the reader guessing each step of the way. It’s very nicely put together and Capullo’s art is still one of the strongest points of the book. The back-up is by Jock and it’s ok. Nothing fancy. Batgirl sees Joker trying to marry Barbara Gordon. The plot is just ok, and Benes’ rushing art doesn’t make it look very good… Batman and Robin has been interesting as Joker completely destroys Damian. It’s a nice book with a lot of potential with every issue, and as a Bat-book, it’s probably one of the most fun. The entire Death of the Family storyline has gone well, and this is a good example of it with three good books dropping at the same time. 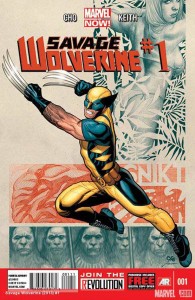 So, I’m not sure if I blame Cho or Marvel for this one. Cho’s not really known for his writing (he did start with Liberty Meadows, but has been mostly art for anything he’s done for Marvel), but boy, does he love exposition. This is a book that’s an excuse for Cho to draw butts, boobs, and dinosaurs, but I’m shocked at how much talking and narration actually happens. It’s incredibly boring, and I’m actually realizing that I’m running out of things to say in the middle of this review. It feels like Marvel released a new Wolverine story as a cash grab, put a big star on it as a cash grab, and it’ll probably be late 2 issues from now on. Ya know, the usual. 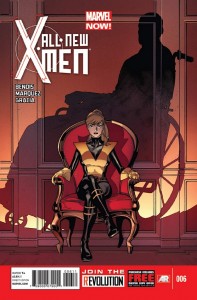 Yeah… Remember last time how I said this book was getting better? Well… one step forward, two steps back. This issue was just miserable, putting things in places that didn’t make any sense, misleading the audience with a cover that had nothing to do with the story, and putting a new artist on the story that didn’t lay out the pages properly, so it becomes difficult for the reader to keep track of how the two-page spread is actually supposed to be read. Let’s tighten up our editing here Marvel, and just publish this book ONCE and not 47 times a month for God’s sake! 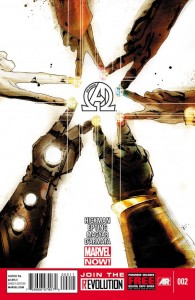 When it comes to a Hickman book, you have to completely invest yourself or you won’t care. It’s very case by case, and this is a case where he is absolutely nailing it. When Hickman goes big… he goes big, and in this case we’re talking about the main Marvel Heroes trying to save the time stream by regathering the parts of the Infinity Gauntlet. There’s a lot of talking and exposition in this issue, but then it jumps to foreshadowing some of the ridiculous fighting that might be coming along soon. Epting nails it out of the park, he’s got the consistency and quality to make Hickman’s stuff easily accessible for everyone. Great stuff. 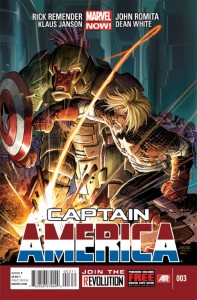 Captain America #3 Writer: Rick Remender Artist: John Romita: I enjoy the Zola world stuff, and the twist at the end is ok, but all those flashbacks to a stupid abuse story are just awful and killing this book for me. Nope.

Conan The Barbarian #12 Writer: Brian Wood Artist: Declan Shalvey: I’ve loved Wood’s run on this title, but not have the art be consistent has hurt it. This is another fun issue that moves the story along. Good stuff.

Saga #9 Writer: Brian K. Vaughan Artist: Fiona Staples: This is just such a weird book. I can’t fully commit to it, but then it will make me laugh out loud. It’s great and mediocre at the same time, so i just can’t say yes.

X-Factor #250 Writer: Peter David Artist: Leonard Kirk: Peter David is just the best. He keeps doing his thing, regardless of what else is going on in the Marvel universe. It’s simple, it’s fun and it’s good.

Demon Knights #16 Writer: Rebert Venditti Artist: Bernard Chang: I can’t believe that I still like this book! With a new writer, we’ve had a time jump and it’s still good. I like this book a lot, and you should too.

And that’s the week! We’ll see you next time.