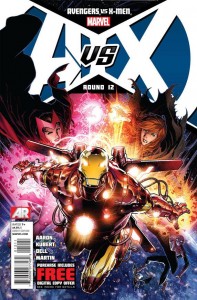 This may not be the best book of the week, but it’s the best seller, and it’s been surprisingly good — partly because the last few Marvel events, especially Fear Itself, lowered expectations considerably. Aaron is a good choice for writer — he doesn’t have some of the stylistic tics in dialogue of a Bendis or a Fraction, so he doesn’t call attention to his writing, and lets the art and action speak for itself, while Kubert holds up his end by making the battle scenes suitably cinematic and fun to watch. The plotting by committee, which could have been a liability,  seems to have worked well — the two or three most obvious twists and resolutions are avoided (although they’re teased), and the reader is left with a satisfying resolution. All in all, this has delivered a fun and effective ride, and fans can’t ask for much more than that. 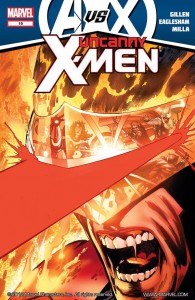 If AVX the series has any disappointment, it’s probably for Cyclops fans — he doesn’t come off well, or end up in a good place, much like Tony Stark by the end of Civil War. Fortunately, Gillen provides an antidote here, by taking the reader into Scott Summers’s head during the events of AVX #12, and making his possession by the Phoenix Force more relateable and sympathetic. It’s a neat trick, especially since Gillen is so good at characterization, and makes this book a seamless and useful addition to the main event. 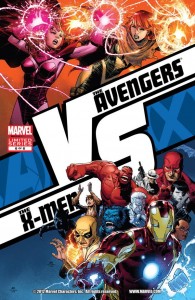 Another tie-in,  this book has been fun because it doesn’t take itself too seriously; it says right on the first page that it’s all about the fight scenes, expanding matches from the main event and revelling in its ability to deliver full-page splashes of people punching one another. Here, the ten-page main story expands on a Hope/Scarlet Witch dust-up in AVX #12 — but the real delight is in the series of one and two-page backup strips that follow it, by unexpected artists like Jim Mahfood (drawing Captain America and Cyclops hurting one another’s feelings) and Art Adams (showing Hawkeye daydreaming about Spider-Woman fighting other superheroines). 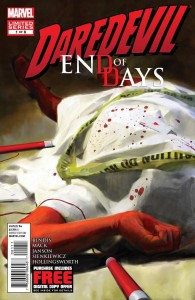 This is apparently a sort of Daredevil: The End, since it begins with the death of Matt Murdock at the hands of Bullseye (it’s not a spoiler if it happens in the first three pages, right?), and is notable for being the return of Bendis to a character whose adventures he had a remarkable run on, and for featuring Janson and Sienkiewicz, a pair of canny old masters, as the art team. Has Murdoch really joined the choir invisible? Will reporter Ben Urich be able to figure out his enigmatic final word? Hey, I’m coming back for the next issue…. 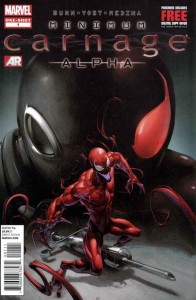 This is the first bookend issue (there’ll be an Omega too) of a crossover between the Venom and Scarlet Spider books, as Cletus Kasady gets sprung from prison by a group of tiny warriors, and disappears, presumably into the Microverse. I don’t follow either of those comics, and Spidey himself isn’t in this, so my interest is low — but if you’re a symbiote fan, or have fond memories of the ’90s crossovers like Maximum Carnage (which sell very well as back issues even today), then here you go: it’s competently enough written and drawn to be worth your time. 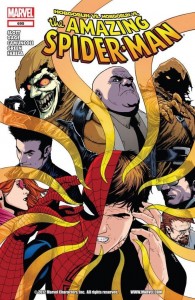 I was going to throw this into the “stuff I bought but don’t have much to say about” category, but decided instead to review all 15 books I took home this week (see how I’m here for you, people?); it’s short on action but long on set-up, as both the current and original Hobgoblins face off, Madame Web has a vision of the future (in a double-page splash with lots of flashes of art from upcoming Marvel books, in one of those Rip Hunter’s blackboard moments that fans love to obsessive over), and Peter’s secret identity is imperiled. With all the buzz about the 700th issue marking a massive game-change for Spidey, this is a good time to check in on him, and, as always, Slott and Gage prove adept at moving their plots and subplots along smoothly, and making sure readers are intrigued enough to return for more. 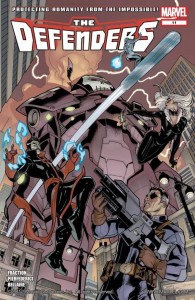 This book hasn’t been a success — the next issue is its last — maybe because readers just don’t care about the team (how many attempts to relaunch this title have their been since its original ’70s run?), and maybe because Fraction jumped into a long, twisty cosmic story too soon. Too bad, though — this is as close as he’s come in mainstream superhero books to his mindbending Casanova series, with Concordance Engines and alternate universes and Death Celestials and foreboding bottom-of-the-page blurbs and all manner of weirdness and snarky humor, and I’ll be sorry not to be able to spend a little bit of time with it each month. 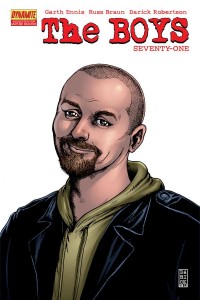 Another penultimate issue, although this one was always planned that way, as Ennis winds up his most long-running series since Preacher. I got this issue and immediately turned to the last page, to see if Hughie made it through alive; that’s a tribute to his ability to make readers care about his characters. I won’t spoil the story for you here, but I will note that Preacher worked the same way: it was the next-to-last issue of that book that resolved all the big plot points, while the final issue got all the satisfying emotional payoffs, with a perfect final scene. Will the last issue of The Boys deliver the same satisfaction next month? Can’t wait to see…. 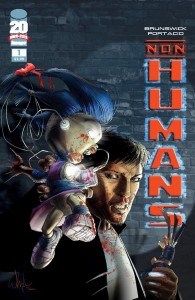 This is another quirky Image book with an intriguing premise  — children have developed the ability to bring toys (and other anthropomorphic items like mannequins) to life, and society has to figure out how to deal with them (they’re conscious, but are the “human”? Do they have rights?) On the one hand, there are a lot of bits and pieces of other works cobbled together here, from Ted to Chucky to I, Robot (yes, to no one’s surprise, the main character is a human cop who’s getting paired with a “non-human” partner), and I take a dim view of a professional work that can’t spell “chrome” right on its first page; on the other hand, you can tell that Brunswick’s put a lot of creative effort into working out the implications of this classic sf “one change,” and Portacio’s a good enough artist to make it all look decent. Like many recent Image books, this has developed some critical buzz, so it’s definitely worth a look. 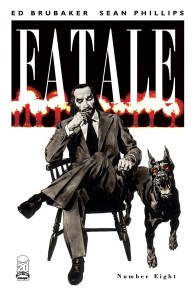 Brubaker’s been wrapping up work on company-owned titles like Captain America and Winter Soldier, and has announced that he’ll be spending his time on creator-owned stuff for a while; if that brings us more issues of this cool little noir mash-up of Raymond Chandler and H.P. Lovecraft, then more power to him. Besides the perfect Phillips art, this title has been notable for its back-of-the-book material; this issue, instead of an essay on some obscure but fondly-remembered piece of detective fiction or film, readers write in with their own descriptions of real-life Femme Fatales whom they’ve 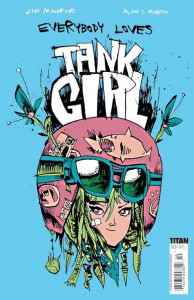 encountered, and it’s almost worth the price of admission by itself.

The last of three issues, and, like its predecessors, a melange of short stories, one-page illustrated text pieces, and other snapshots of the original Australian riot grrl, courtesy of her creator, and all tied together with Mahfood’s loose, energetic and somehow-just-perfect art. 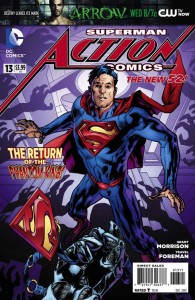 Now, this may be the best book of the week, but then I’m a sucker for both Phantom Zone stories and dog stories, and it delivers both.  A mostly self-contained (except for one page) Hallowe’en story, with Phantom Zone criminals substituting for ghosts, it works a new origin of the Zone into Morrison’s Kryptonian history — but the real attraction is Krypto. Morrison’s always had a wide soft streak for animals (We3, one of his best works, revolves around them), and the end of this comic should bring at least a tiny tear to any animal-lover’s eye. 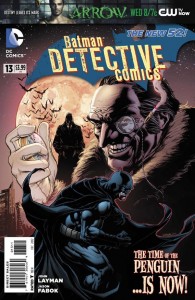 John Layman, the creator of the cult Image Comics hit Chew, takes over the reins, and spotlights Oswald Cobblepot, better known as The Penguin, who’s taken out a hit on… Bruce Wayne.  In Chew, someone like The Penguin would be the object of satire and humor, but Layman plays him straight here, as an oily-smooth menace pulling strings behind the scenes who’s desperate for affirmation, and Fabok’s art, while a little Gotham-City-generic, is suitably shadowy and smooth on the action scenes. The result isn’t earthshattering — nobody gets their face cut off — but still an above-average Batman story 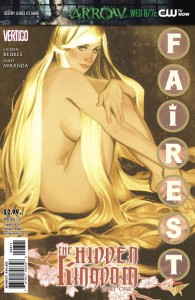 If you can’t have Bill Willingham scripting, this isn’t a bad sustitute: Beukes is an award-winning sf author, and she introduces the first episode of an arc starring Rapunzel, who’s traveling to Japan to search for clues about her long-lost children (it also co-stars Jack of Fables, so fans missing him since his own series was cancelled can get their fix of the (sometimes) lovable rogue here). The story’s set during the “classic” NYC apartments days of the early Fables stories, and promises to draw on Japanese ghost tales as part of its inspiration; (artist Miranda looks like a good choice: he can draw horror, pretty women and Japanese street scenes equally well. 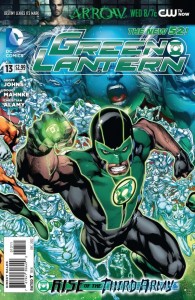 This picks up right where the GL Annual left off, with new (and reluctant) GL Simon Baz, a Muslim-American who’s been falsely accused of terrorism, and now has a green ring he can’t get off, and images of both Hal Jordan and Sinestro in his head, yelling incomprehensible things at him. And then, on the last page, another problem shows up…. Johns and Mahnke have been at this long enough to know just what they’re doing, and focusing on the new guy at the start of this newest GL universe chapter, “Rise of the Third Army,” lets them slow down the action, gradually fill in readers on his background, and prepare the way for whatever fireworks should shortly follow.

With 40 years of experience in comic reading, collecting and reviewing, English Professor Phil Mateer has an encyclopedic mind for comics. Feel free to ask Phil about storylines, characters, artists or for that matter, any comic book trivia. He will post your questions and answers on the AABC blog. His knowledge is unparalleled! He is also our warehouse manager, so if you are looking for that hard to find comic book, ask Phil!
View all posts by Phil →
This entry was posted in New Comics, Reviews and tagged Action Comics, Avengers Vs. X-men, Batman, Carnage, Daredevil, Defenders, Detective, Fairest, Fatale, Green Lantern, Non-Humans, Spider-man, Superman, Tank Girl, The Boys. Bookmark the permalink.