This is in the Hernandez Brothers’ current format: a new trade each year, for $14.99, with 100 pages of stories: a look at the new generation of characters in Palomar, from Gilbert, while Jaime provides a series of  LA tales involving Vivian and her sister.  There’s no Maggie or Hopey, since their story was concluded in last year’s “The Love Bunglers,” and while what’s here isn’t quite at the level of that issue (no sin, since it was one of the best Hernandez offerings ever, and the best comic of the year), all of this is very well drawn and well told, with the same smooth combination of humor, humanity and chilling, inevitable violence that’s always characterized Los Bros’ best work. 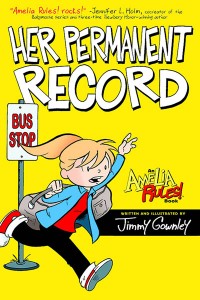 This actually came out last week, but I couldn’t let it go without a mention: Gownley’s all-ages title about a young girl and her elementary-school (and now, middle-school) friends has been a well-crafted delight for over ten years (the back cover features a pull quote from my Comics Buyer’s Guide review of the very first issue in 2001). Like the Hernandez Brothers, and many other creators, Gownley’s abandoned the floppy-comic issues for a series of trades, and this is almost 150 pages for $10.99, a bargain anywhere. It feels like an ending, too; Amelia’s gotten taller and older, and, like most of the cast, is teetering on the edge of puberty, so there’s both a lot of looking back and a lot of looking forward intertwined with the action. As she embarks on a quest to find her missing aunt that eventually echoes some of her earliest adventures, talks of putting away childish things and facing her future, and modifies her relationships with many of the kids she knows, there’s a bittersweet tang to the writing that suggests that Gownley’s saying goodbye to her, at least for now. If so, he’s leaving her in a good place, and this book and the seven collected adventures before it should be a source of pleasure for new readers for years to come. 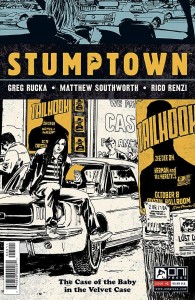 Stumptown: The Case of the Baby in the Velvet Case #1 — Writer: Greg Rucka;  Art: Matthew Southworth

Stumptown is a noir comic set in the Pacific Northwest, with a tough-as-nails female private investigator; it was the subject of a four-issue series a few years ago, and now Rucka, who’s said he wants to concentrate on his creator-owned writing instead of superhero stuff, has returned to it as an ongoing title. If you like PI stuff, you’ll love this: Southworth’s art is just the right combination of expressive and gritty, and Rucka’s very good at hitting the right beats with his appealing detective, as she takes on a case involving a missing guitar, which of course begins to lead to a lot more than it seemed at first glance. 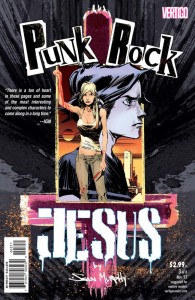 This tale of a boy born of DNA taken from the Shroud of Turin, who’s the subject of a modern-day 24/7 reality TV show as he grows up, continues to improve with each issue; you can just see Murphy get more confident in both his art and his story, as he adds cool little touches to the black-and-white art, and his characters take on a life of their own. He’s got a good grasp of story structure, too — there’s a big twist at the end of this issue, exactly halfway through the series and just where it should be — and his ability to handle both the graphics and the narrative so well marks him as a creator to watch. 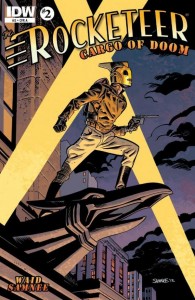 This creative team-up sounded like a sure thing when it was announced — Waid’s a great writer, and Samnee’s a wonderful artist, with just the right retro touches to shine on a 1930’s-era series like this — but in real life it’s not quite as good as anticipated. That’s because Dave Stephens, who originated the Rocketeer character, turns out to be a very tough act to follow — he was obsessive about getting all the ’30s details right, and his art was so polished and confident that the memory of it keeps intruding here, keeping the reader from enjoying this new offering as a story in its own right. If you’ve never read the ’80s originals, you’ll probably find this charming and well-crafted — but otherwise the ghost of the older work will interfere with your enjoyment a bit. 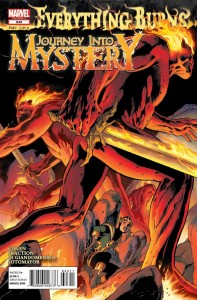 Gillen and Fraction continue to burn up much of Asgardia, the Nine Realms, and Loki’s relationship with his heroic older brother, to entertaining effect. Is the trickster godling a good guy, a bad guy, or something in between? It’s not knowing for sure that drives the narrative here; kudos to the writers for walking that tightrope so well, and to de Giandomenico for being able to reflect that so equally well in the art (there’s one full-page splash, a closeup of Loki’s face, that’s especially effective, all the more so for being so deliberately hard to interpret). 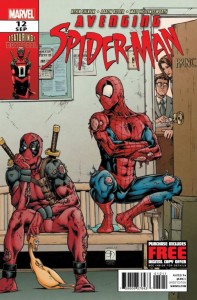 I’m not familiar with either the writer or artist here, but this first of a two-parter teaming Our Hero and Deadpool is a lot of fun, with major riffs on Inception, John Hughes high-school movies, and buddy flicks, and an ending involving the lamest ’70s villain of all time that promises a decent second act too. If a book like Avenging is meant to give different creators a shot at Spidey and the freedom to do whatever they want with him, as long as it leads to a good story, then this is doing its job. 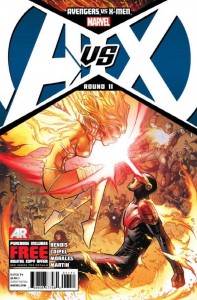 All the big event crossover books in one pile: A vs. X is the main event here, and offers a big (if totally expected) development as a lead-in to its final issue next month, plus a death of a major Marvel character that’s just about equally expected. Bendis’s script is about what you’d expect, too, but it’s Coipel’s art that rises to the occasion: his battle scenes and full-page splashes are some of the 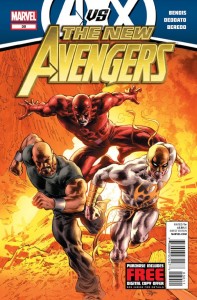 best work he’s done, and drive the action forward in fine style. Even as it goes down a familiar path (what else would readers expect from a story built by committee like this?), this comic continues to offer more than enough fun and excitement to justify the spotlight on it. Uncanny should be read right after A vs. X, as it uses its pages to emphasize smaller pieces of the bigger main story, including defining scenes between Ilyanna and Peter Rasputin and between Scott and Emma; Gillen’s characterization, as always, is the main draw here. New 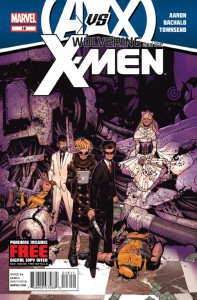 Avengers and Wolverine both focus more on the aftermath of the battle; New Avengers sees a character quit the team, and is worth reading for Bendis’s script, while Wolverine emphasizes its kid-centric new version of the Hellfire Club, and gives readers value because of the Bachalo art. As a big interconnected pile of superhero books, they offer a good picture of the state of the Marvel Universe right now — and, while it would cost $15.96 to read all of them, that actually turns out to be a fair price.

With 40 years of experience in comic reading, collecting and reviewing, English Professor Phil Mateer has an encyclopedic mind for comics. Feel free to ask Phil about storylines, characters, artists or for that matter, any comic book trivia. He will post your questions and answers on the AABC blog. His knowledge is unparalleled! He is also our warehouse manager, so if you are looking for that hard to find comic book, ask Phil!
View all posts by Phil →
This entry was posted in New Comics, Reviews and tagged Amelia Rules, Avengers Vs. X-men, Avenging Spider-Man, Journey into Mystery, Love and Rockets, Punk Rock Jesus, Rocketeer, Stumptown. Bookmark the permalink.