No, I’m not doing all of the DC #0s for this week; just the six (well, seven) that caught my eye. Props to DC for including a full-page “Who’s Who”-type entry in each book, by the way — that’s a good move, especially if you figure that each of these origin issues will attract some readers who aren’t that familiar with the main title. Anyway… 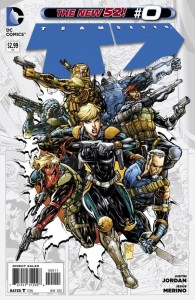 This is the one “new” title of the lot, and it suffers for that — DC had a good plan by not leading with their “0” origin issues right off the bat for the “New 52,” instead giving each comic a chance to showcase its characters and build reader interest first. That avoided a lot of the problem here: it’s a standard “getting the band together” plot, with 20 pages to introduce nine characters and get them on one splash page (yeah, the “Team Seven” thing indicates that a couple of them aren’t going to last long, although since it’s set in the past and two of the members are Slade Wilson and Grifter, maybe some will just leave…). The art and story are decent enough (Merino has the kind of solid, unflashy competence of someone like Mark Bagley), although little happens — but I kind of like the idea of the team being formed to keep tabs on metahumans. There are quite a few Easter Eggs for old Image/Wildstorm fans, too, including a mention of a “Majestic Project” — but since the Wildstorm imprint was pulling fewer than 10,000 readers to its output at the end, that probably won’t have much effect on sales. Will this issue make readers pick up the #1 in a month? Guess we’ll see…. 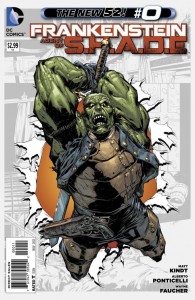 Kindt has more than enough sense of the bizarre to make a good creator for this title, and Ponticelli is pretty good at drawing the grotesque and the weird, so they make a good team here, especially since they’ve had two issues of the “regular” comic to get acquainted. This origin traces the green guy from Victor Frankenstein’s castle in 1823 to his recruitment by S.H.A.D.E.; I’m not sure it’s built to attract many new fans, but current readers of the book should like it just fine. 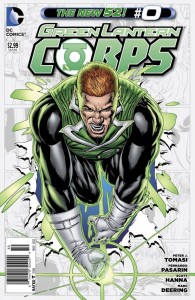 Ditto here — if you’ve been a fan of GLC, here are the same guys who’ve been doing it, providing a new origin/retcon for their bread and butter corpsman, Guy Gardner. Disappointingly, he’s a lot less of a jerk in this incarnation (Guy as a dick is one of the guilty pleasures of the character), the son of a whole family of police officers, but who’s somehow got framed and kicked out of the force, and now is considered the black sheep. He’s still got daddy issues, but his hair doesn’t make him look like Moe anymore, and this issue gets him a ring and leaves with him on Oa, meeting Hal Jordan and immediately getting under his skin. Some things remain constant in any reincarnation…. 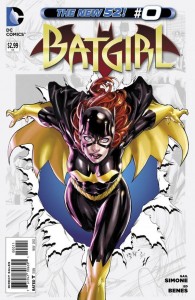 This is one of the best of the “zero” issues this week, with Simone providing a clever way for Barbara Gordon to get into a Batsuit, and a decent explanation for how she had the skills and luck to keep it (ending, of course, with an inevitable knock on the door, and a scene that we’ve seen many times before). Benes’ art looks better than usual, too (because he’s doing his own inks), and this is the kind of smooth, enjoyable introduction that should attract some new readers to the main title. 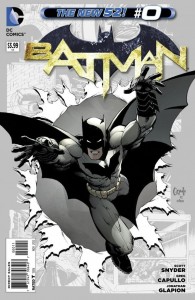 This is the other candidate for best “zero” book of the week — again, because it’s by the main book’s regular team, and they figured out an effective combination of art and story a while ago. The one annoying thing is that it’s set in the past, and ends on a cliffhanger and a “to be continued in 2013” caption — cheating for an issue that’s supposed to provide a good introduction to the character, I think. For the extra buck (the cover price is $3.99 instead of the $2.99 for the other “zero” issues), there’s an eight-page story giving a little insight into the younger lives of Tim Drake, Jason Todd, Dick Grayson and Barbara Gordon — although not enough to form an actual story. 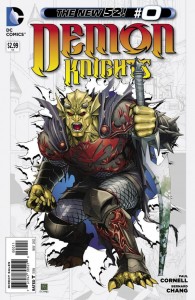 An origin of the Demon/Jason Blood symbiosis, and Cornell’s clever enough to show that neither one was all that successful, in hell or in Camelot, until their combination. If anything, this story is a little too contained — it shows little of the other members of the “main” book’s team (although Madame Xanadu shows up briefly), and doesn’t create a lot of incentive for readers to run to that book next month.

Not labeled a “zero” issue, but it amounts to the same thing — it’s a self-contained origin of the title character, except that it’s at the end of the mini-series’s run instead of a lead-in to future stories. It’s too bad Frazer Irving, who did such a stellar (and pretty) job on the other issues, didn’t draw this one too, but Gene Ha’s a more than capable sustitute. It’s bad he doesn’t have more to do, though — it’s more like he’s illustrating excerpts from the Shade’s journals (in annoying cursive, too), and for a long-anticipated origin there’s not much actual story here; we don’t know much more about what actually happened by the end of the tale than we did when we started.

With 40 years of experience in comic reading, collecting and reviewing, English Professor Phil Mateer has an encyclopedic mind for comics. Feel free to ask Phil about storylines, characters, artists or for that matter, any comic book trivia. He will post your questions and answers on the AABC blog. His knowledge is unparalleled! He is also our warehouse manager, so if you are looking for that hard to find comic book, ask Phil!
View all posts by Phil →
This entry was posted in DC, New Comics, Reviews and tagged Batgirl, Batman, Demon Knights, Frankenstein, Green Lantern Corps, Shade, Team Seven. Bookmark the permalink.