The Latest and (Mostly) Greatest #57 by Dan!

All right folks! Football season’s starting, but I won’t be writing these on Sunday’s, so you won’t get to hear about the stupid amounts of money and pride I lose! Let’s do this!

I have to say, I do wonder what this book would have looked like if Robertson hadn’t jumped ship about 20 issues ago. I’ve moved on, but it’s interesting to see just how much Braun has done. Phil and I seem to debate each month about the ending of this book, and that’s how you know it’s good. It leaves you guessing. Ennis has a heart, so we expect Hughie to get a happy ending, but that’s not a guarantee. Everything comes to a final plot point at this issue, and we’re left wondering why we just watched Hughie do what he did (I honestly don’t know, was it a strength boost? or just Ennis being weird?) There’s only one issue left, and I’ll be sad when it’s gone. This has been an absolutely excellent book in almost every facet.

Holy frijole, Hawkeye may be the absolute best book of the year and it’s only had two issues so far!  Aja is quite possibly the best artist working in comics right now; every panel matters, and some pages have more than 20 panels. It’s a feast for your eyes that I can’t say enough about. Of course, it wouldn’t be anything if Fraction’s script didn’t keep up, and it most certainly does. It’s not a straight-forward superhero romp; it’s well put together stuff that doesn’t get bogged down in continuity. Also worth noting, it looks like this story will be Hawkeye vs. a TON of Marvel villains, so we get to see Aja give his design of Kingpin, Hammerhead, the Owl and more. It’s fantastic. 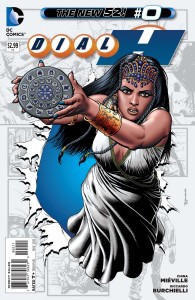 Speaking of out of continuity, Dial H reads like a Vertigo book. This week sees the beginning of DC’s one-year anniversary and month of #0 origin issues. This origin is probably the most off the wall thing you’re going to get, possibly putting an explanation into what the Dial actually does, and it’s fascinating. The idea put out here, that the Dial might actually be stealing powers and creating serious problems elsewhere, is really, really different and fun. This book works because it’s on its own, and this “origin'”issue was completely outside the box and I loved it! 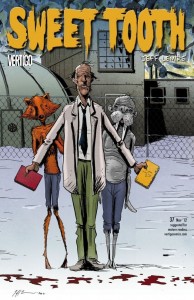 So… everyone’s going to die right? That’s kinda what I get from this issue. I think there will still be a ‘happy’ ending, but i don’t think it’s coming for everyone. Sweet Tooth is one of the most eclectic books that DC has released in the past 10 years. It’s been an interesting book month in and month out; it was the starting point for Lemire’s mainstream career, and it’s been quite the fun read. It’s toed the line of being creepy and yet endearing, and I have enjoyed every single issue. A lot of great books are coming to an end here, and it’s making me realize just how strong some of the non-mainstream superhero books have really been over the past years.

This month of 0’s will also see several new books getting started, like this week’s Phantom Stranger. I can’t quite tell if it’s good or not. I enjoy the Phantom Stranger character so much, that to see him stuck in the deeper continuity of DC and tied into whatever that Flashpoint-Pandora nonsense is makes me nervous. The issue itself is fine, we get the Stranger’s origin and see how his ‘mission’ works, and the Spectre is mixed in to keep the spiritual tone going, but I’m just not sure. The art is pretty, and looks a bit like the old Aparo Spectre stuff, but I’m so indecisive about this book. This is an OK book with potential, but my blase attitude makes me worried about its future.

While many books have straight-up ending, things like Iron Man are seeing the ends of huge runs from big name creators. Perhaps one of the best has been Fraction and Larroca on Iron Man. The book has gone in waves of quality, but has never been bad. Usually when the run was at a low point, it was just building to the next big thing. This current Mandarin story is no exception. Fraction is putting together pieces of the entire run going all the way back to the beginning and bringing them to a head. I think when all is said and done, this may be the best Iron Man run we’ve seen in a long time, and may be the pinnacle that other books hope to reach for a while. 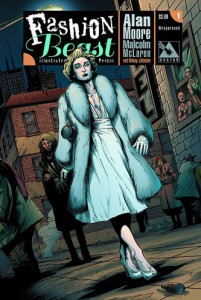 Fashion Beast #1 Writer: Alan Moore Artist: Malcolm McLaren: What the… This book is bizarre, but not in the way you’d expect. I don’t even know man…

Swamp Thing #1 Writer: Scott Snyder Kano: Snyder uses his zero issue to show the origins of the green and various Swamp Things, and it’s pretty enjoyable. It all makes sense and works well.

Animal Man #0 Writer: Jeff Lemire Artist: Steve Pugh: Lemire uses his zero issue to show why Buddy Baker isn’t quite right for the role as an avatar of the red and it’s just as good as Swamp Thing. Enjoyable, consistent stuff. 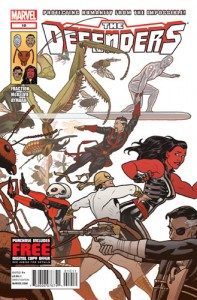 Defenders #10 Writer: Matt Fraction Artist: Jamie McKelvie: This book is so much fun, and McKelvie’s art is so pretty, but it’s done at issue 12, and that makes me sad.

Before Watchmen: Silk Spectre #3 Writer: Darwyn Cooke Artist: Amanda Conner: So Frank Sinatra is evil, that’s what I learned from this comic. It’s enjoyable, but so totally strange.

And that’s the week!