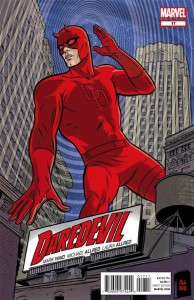 Guest artist Allred puts this book at the top this week (although it doesn’t need a lot of help — the letters page mentions the three Eisner awards it won this year, for best writer, best continuing series and best single issue (#7), and also lists the great artists it’s had  — the Riveras, Marcos Martin and Chris Samnee — so it’s been doing just fine, thanks). The story’s little more than treading water from last issue’s Matt/Foggy split — DD muses about an earlier case he and Nelson argued over — but that’s actually writer Waid giving Allred a chance to draw the Silver-Age Stilt-Man, and between the cityscapes, the acrobatic fight, and that cover… well, as I said, book of the week: and in a strong week too. 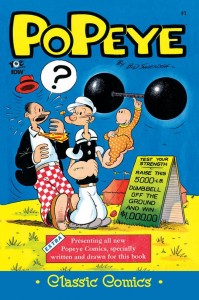 This is a reprint of Popeye #1, published by Dell Comics in 1948 (48 pages for 10 cents, back then… and, sigh, $3.99 today), and it’s a lot of fun. Sagendorf had the unenviable job of following the genius of Elzie Segar, and he was no genius himself — but he was a very good draftsman, and a creative and funny writer, one who had started out assisting Segar, knew the strip’s style and characters inside out, and ended up spending almost 30 years on it, and almost 15 years producing the comic (from this first issue on, and with all-new material). The result is a good-looking, G-rated book, one that holds up remarkably well today, over 60 years after its original publication, and that’s a perfect entry drug for any 10-or-under kids you’d like to indoctrinate into the comics-reading habit 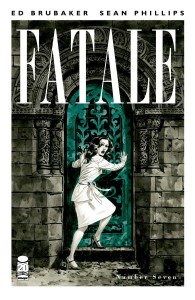 Not for any 10-year-olds; just the opposite, really, with its noir attitudes and bad girls (and guys), although this issue has little explicit sex or gore; for one thing, Brubaker and Phillips know the power of restraint and innuendo (even as two of their main characters are shooting heroin), and for another, it’s the second chapter of a new story, so there’s a lot of set-up around a reel-of-film MacGuffin and the various players chasing it. As always with this title, it’s accomplished, clever, very well-drawn, and hard to resist, even when you have to figure that every character in it (except possibly the one referenced in the title) will come to a spectacularly bad end. 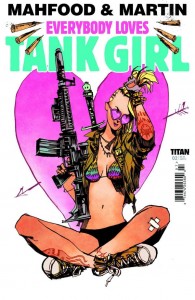 I reviewed the first issue of this title just a few weeks ago, but here’s the second, and it’s worth reiterating just how perfectly Mahfood fits Martin’s twisted universe — he can deliver drawings that are funny, sexy, scatalogical and dramatic, all on the same page, and his art is weird enough to handle poem pages, fake ads, and actual (semi)linear stories of Tank Girl, Booga and their spectacularly deranged friends. If you were a fan of this back in the day (yes, the ’90s now count as “in the day”), it’s an encouragement to see that the characters still have some anarchic life left in them. 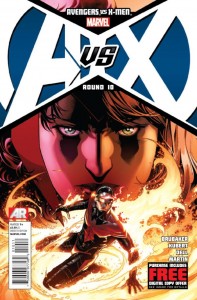 The antepenultimate issue (i.e., third from the end — geez, look it up, people), and there’s plenty of action, as the Phoenix Five are now the Phoenix Two, and Cyclops has a big fight with the Avengers and Hope, who stops running and starts punching (taking Ralph Kramden’s “Pow! To the moon!” line a trifle literally). Brubaker and Kubert offer one of the better creative combinations of this tag-team series, and, while none of it is breaking new ground, it continues to offer just the kind of fluffy, zap-pow pyrotechnics that you want out of a summer event. 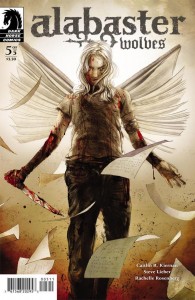 This Southern Gothic tale about an albino girl (Dancy Flammarion, and the way her name rolls off the tongue says something about Kiernan’s abilities as a writer) who hunts monsters, spurred on by an angel, has been as stubbornly thought-provoking as its title character, refusing to settle for easy answers or simple resolutions, even if they promise peace. It’s also been beautifully drawn by Lieber — no easy task, given the various supernatural entities and complex emotional payoffs required — and I’m hoping that, when the series returns for a long run in the anthology Dark Horse Presents in a few months, he’ll be aboard too. It’s the kind of book that can show readers who don’t care about superheroes or testosterone-fueled, mindless action (not that there’s anything wrong with that…) just what comics can do, and God knows we can always use more of those. 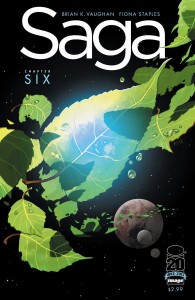 Another book that’s for non-superhero readers — and one that’s been a big hit, going into multiple printings and attracting lots of new readers. And why not?: Staples has handled every aspect of the art and coloring, making this one of the best-looking books on the stands, and Vaughan’s science-fiction/fantasy/romcom/quest story is intriguing, imaginative and addictive. This issue marks the end of the first arc, just the first chapter in a very big story, and it leaves its characters in just the right place (and with just the right last line) to make sure that they’re hooked.

Oeming (best known as the artist/collaborator on Powers with Brian Michael Bendis) both writes and draws this offering; it’s a fairly standard, if edgy, superhero tale set in a corrupt city, where a Punisher-type hero fights a more moral, Daredevil-type one who’s adverse to killing. The art’s in Oeming’s semi-cartoony, well-composed style, while the story… well, it’s driving down a well-traveled road, and there’s not a lot of subtlety to the dialogue (as with many artists who tackle writing, Oeming tends to go for the obvious exposition when he’s putting words in people’s mouths); it’s not terrible, but the strengths of this book are a lot more visual than verbal. 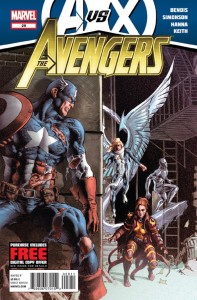 Speaking of Bendis… although he’s providing the script, this, like The Victories, depends much more on its pictures than its words, since those pictures are by the accomplished Simonson, who gets to draw a lengthy Avengers/X-Men fight (Thor’s present on the Avengers side, so there’s the bonus of watching the artist return to one of his signature characters). The story itself? It’s behind on continuity (Namor is the one Phoenix Force representative, so they had to stick a note in the front saying that this takes place before AVX 8), and the fight is resolved via a deus ex Professor X device that essentially resets everything back to zero. If you want to see the AVX over-plot move forward, you’ll be disappointed, but Bendis’s knack for dialogue, and Simonson’s ability to draw real purty pictures, are still enough to make this worth buying. 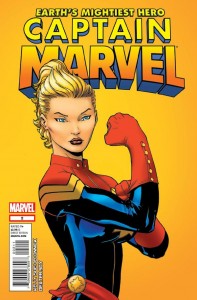 I’m becoming a fan of Deconnick’s writing (her work on Supergirl right before the “New 52” relaunch was encouraging, and a two-parter in Avenging Spider-Man guest-starring this new Captain Marvel was pretty good, too), but didn’t particularly like this issue — the art, while pleasant enough to look at, is often static, and the whole time-travel plot seems kind of boring, especially for such an early issue in an ongoing series. Better visual flow, and more showing off of what makes this character special, would help to catch and hold more readers. 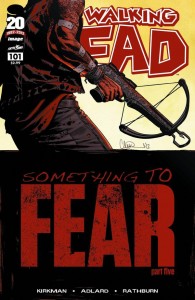 You want to see how to catch and hold readers? Pick up any issue of this book, especially the last few. Between the plot twists and character interaction in the comic itself, and the extended letters-page conversations, Kirkman proves masterful at corralling and keeping an audience. Look at the list of titles this week, and at the number of creator-owned books on it; they’ve been one of the big trends in comics the last few years, and it’s writers like Kirkman who’ve shown that you don’t need a shared superhero universe or corporate backing to be successful — not if you know how to tell a great story. 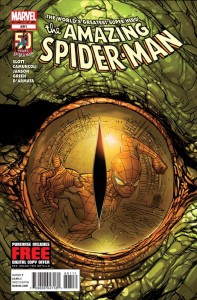 On the other hand, corporate-owned superheroes have their place too, and the team here does a good job of showing why they can still be work: The subplot about Very Bad Things lurking in Spidey’s future is tired (it’s an obvious build-up to the anniversary issue, #700), and the art, with contributions from four different pencillers and inkers, is only OK, but Slott is adept at offering an effective combination of adventure and humor, with a morally-grounded hero fighting against tough foes and long odds, and a light touch that moves everything along smoothly and encourages readers that it’ll all work out in the end.

With 40 years of experience in comic reading, collecting and reviewing, English Professor Phil Mateer has an encyclopedic mind for comics. Feel free to ask Phil about storylines, characters, artists or for that matter, any comic book trivia. He will post your questions and answers on the AABC blog. His knowledge is unparalleled! He is also our warehouse manager, so if you are looking for that hard to find comic book, ask Phil!
View all posts by Phil →
This entry was posted in New Comics, Reviews and tagged Alabaster, Amazing Spider-man, Avengers, Captain Marvel. Walking Dead, Daredevil, Ed Brubaker, Fatale, Michael Allred, Popeye, Saga, Tank Girl, The Victories, X-men. Bookmark the permalink.