It Came From the Back Room #52 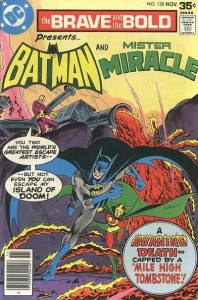 Standard recap: I’m slowly going through AABC’s one-million-plus back-issue room, restocking the boxes on the sales floor and pulling stuff to sell as discount/overstock/special items. I’m going through the alphabet backwards (don’t ask), and at my speed (especially now that school’s started again), this amounts to a three-year project.  This week, we’re focusing on the east end of the store, and the discount racks there that have had Captain America books for most of the summer. Those are now gone, and have been replaced with a bunch of DC “B” titles, like so:

The Brave and the Bold 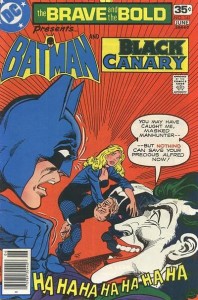 This was one of DC’s Silver and Bronze-Age mainstays, debuting in 1955: at first it was a tryout book (the Justice League got their start there, in issues #28-30), and then, beginning with issue #67, in 1966, a Batman team-up book for the rest of its long (200-issue) existence. Our discount offerings start around 1975, somewhere in the 120s; this is part of a long period where writer Bob Haney and artist Jim Aparo were the creative team. Some readers like Haney’s done-in-one-issue plots a lot, finding them charming examples of the kind of quick, compressed plotting and disregard for continuity that defined much of 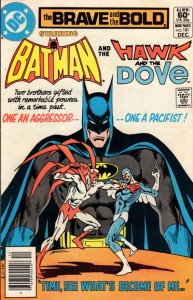 DC’s Silver Age books. That’s exactly why I don’t like them — a typical Haney story gets Batman and his guest star wrapped up in some complex web that, two pages from the end, magically and conveniently unravels to resolve itself, and you can only read so many stories like that before the pattern gets boring. On the other hand, the parade of guest stars is always fun (and searching out the issues that involve your own favorite B- and C-list DC heroes is the best part), and the Jim Aparo art is always worth a look: if Neal Adams is the definitive Batman artist of the ’70s, Aparo’s a close second, and he drew a lot more pages of the 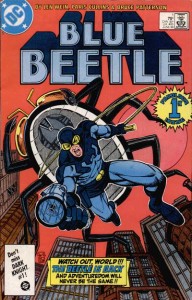 There are two past volumes of DC’s version of the Blue Beetle (plus the current “New 52” one). The first is the mid-’80s Ted Kord incarnation, and managed 24 issues, mostly written by Len Wein and with art by Paris Cullins, although Ross Andru pencils five or six of the later issues, and Don Heck shows up for the last two. If you want a good example of straight-ahead, typical DC superhero fare from the mid-’80s, here it is. The second volume, which managed 36 issues starting in 2006, is more familiar to modern readers, because its Jaime Reyes character has appeared in the DC TV cartoons. This one starts out with writing by Keith Giffen and John Rogers, with art by Cully Hamner (although Cynthia Martin and Duncan

Roulleau contribute to some of the early issues too); the title starts to take off, though, when Rafael Albuquerque comes aboard as penciller with issue #10, and Rogers takes over solo writing chores with issue #11. That team manages a long arc involving the Reach, the alien race that uses Jaime’s scarab/suit to conquer other planets, and culminates (minus a few fill-in issues) in issue #25; it’s a heroic, fun and action-packed story that’s probably the best with the character to date. Unfortunately, both Rogers and Albuquerque leave with that issue (although the artist returns a few times afterward), and although new writer Matthew Sturges isn’t bad, the title never manages to hit that high note again. 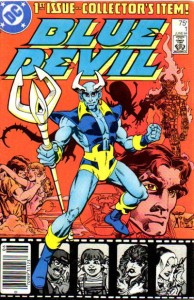 This series lasted for 31 issues (plus an annual) in the early ’80s, with scripts by Gary Cohn and Dan Mishkin, and art by Paris Cullins; it’s a mostly light-hearted romp about a stuntman/special effects guy, Daniel Cassidy, who creates the title character’s costume/trident for a movie, but then (as is inevitable in comics) an actual demon gets unleashed, there’s a fight, and when the dust has cleared Cassidy finds that the costume is permanently welded to him. This leads to many adventures with various DC heroes and villains (many of them explained with the 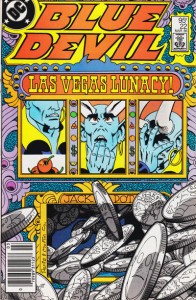 clever idea that Cassidy is a natural “weirdness magnet,” so that para- and superpowered people and creatures just naturally keep turning up around him). Cullins leaves with issue #6, and various artists contribute to later issues (Gil Kane in #7 and Keith Giffen in #8, while Alan Kupperberg does most of the others), but Cohn and Mishkin stay on through the whole run, except for a couple of fill-ins, and they keep the tone amusing, clever and fun enough to make this worth checking out.

Like Blue Beetle, this has an incarnation in the ’80s and one in the ’00s; the ’80s version is the brainchild of Dan Jurgens, who both wrote and drew the character’s adventures for his entire 24-issue run starting in 1986. Booster is a time-traveler from the future, who’s using stolen future-tech (mostly a powerful force field and a small flying robot butler/confidante, Skeets) to become a superhero in our own time — and, incidentally, to gather as much money and fame as he can. Through the course of the book, he gradually becomes more heroic and courageous, eventually paying for his future thefts and joining the ’80s 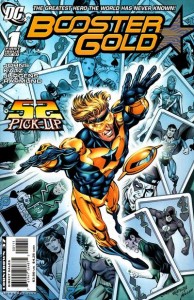 Justice League, where he and Blue Beetle become that group’s resident troublemakers/pals/comic relief. The 2006 version focuses on the time-traveling angle: Booster, aided by mentor Rip Hunter, is tasked with being a secret defender of the multiverse, helping various alternate timelines to survive crisis points (much like Marvel’s Exiles title did), and keeping the “main” DC timeline free of outside manipulation. Since this lets him hop around to all kinds of different continuity points, it’s fun for fanboys and fangirls, and let this version of the title survive for 49 issues (#1-47, plus  “0” and “one million” ones), swept out only by the one timeline alteration he couldn’t fight: DC’s 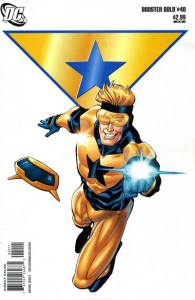 “New 52” makeover. This iteration of the character starts out with his creator, Dan Jurgens, on layouts, with Norm Rapmund on finishes and Geoff Johns and Jeff Katz on the script; that team stays constant over the first ten issues, with Chuck Dixon then coming on as writer for the next two, followed by Rick Remender/Pat Oliffe/Jerry Ordway on the two after that. Jurgens then resumes both writing and pencilling duties on the book for issues #15-31. The next team is a throwback: Keith Giffen and J.M. DeMatteis, the writers who’d immortalized Booster in JLA back in the ’80s, on scripts, with Chris Batista on art; that group stays through #43, after which Jurgens comes back to finish out the run.

This title’s had a surprisingly long history: it starts as a one-shot in 1996, starring Black Canary and Oracle (the wheelchair-bound, computer-whiz Barbara Gordon), written by Chuck Dixon and with art by Gary Frank; later that year, the four-issue series BOP: Manhunt, also written by Dixon but with art by Matt Haley, adds Catwoman and Huntress to the mix. The pattern — various DC distaff heroes, anchored by Oracle as the moderator and Black Canary as her rep in the field, written by Dixon — stays the same through a few more one-shots and mini-series, and the book proves popular 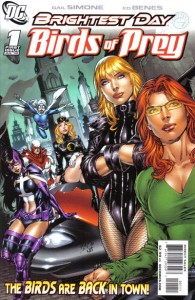 enough to get its own ongoing series starting in January, 1999, with the first six issues drawn by Greg Land. Land also does issue #8 (mostly an Oracle/Nightwing romance, which has pushed that issue to cult status and a $30 price tag), plus issues 9, 10, 13 and 14. Butch Guice becomes the next regular artist, with issue #15,  and stays through issue #30; he comes back a few times later, but revolving artists become the norm for a while. Of those, Marcos Martin (lately of Daredevil fame) in #37 and Glen Fabrey in #42 are the most notable. Dixon leaves with #46, giving way to the high-profile team of Terry Moore on script and Amanda Conner on art for issues #47-49, followed by Gilbert Hernandez (!) on script and Casey Jones on art for issues #50-55. Issue #56 sees the debut of writer Gail 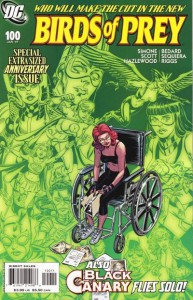 Simone and penciller Ed Benes; Simone settles in for a long run, and is today considered the series’s definitive scripter, while Benes stays through issue #65, and appears a few times afterward. Musical artists then become the book’s norm (Michael Golden on #66 is one high point), with Joe Bennet, Paulo Sequeira and Nicola Scott the most long-lived. Simone leaves with issue #108 (replaced by Tony Bedard), and the first volume ends in 2009 with issue #127. Volume two follows closely after, though, with Simone and Benes reunited in 2010; Benes stays for the first five issues, and Simone for the first 13 — but the title itself only lasts for 15 issues, being cancelled to make way for the “New 52” initiative — and a completely different creative team and focus — about a year ago.

With 40 years of experience in comic reading, collecting and reviewing, English Professor Phil Mateer has an encyclopedic mind for comics. Feel free to ask Phil about storylines, characters, artists or for that matter, any comic book trivia. He will post your questions and answers on the AABC blog. His knowledge is unparalleled! He is also our warehouse manager, so if you are looking for that hard to find comic book, ask Phil!
View all posts by Phil →
This entry was posted in Comics History, News & Promos and tagged Birds of Prey, Blue Beetle, Blue Devil, Booster Gold, Brave and Bold, Jim Aparo. Bookmark the permalink.

One Response to It Came From the Back Room #52