It Came From the Back Room #48 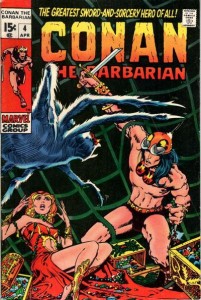 Standard recap: I’m slowly going through AABC’s one-million-plus back-issue room, restocking the boxes on the sales floor and pulling stuff to sell as discount/overstock/special items (these are featured at the discount racks at the west end of the store for a couple of weeks after each post, and then go to the discount racks on the east end of the store for a few weeks, and then disappear into our warehouses, so get them while you can). I’m going through the alphabet backwards (don’t ask), and at my speed (especially with the school semester in full gear), this amounts to a two-and-a-half-year project.  This week, we’re working the letter “C,” specifically: 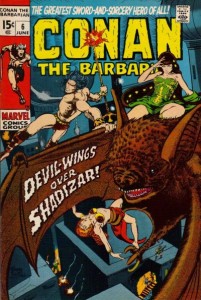 Robert E. Howard’s surly Cimmerian barbarian first appeared in a number of pulp short stories and novellas in the 1930s; these were collected into a series of paperbacks in the ’60s, and proved popular enough that Marvel comics got the license to print comic-book forms of Conan’s adventures starting in 1970. Conan the Barbarian, the main comic, lasted 275 issues, well into the ’90s (Marvel also published the black-and-white magazine, Savage Sword of Conan, from the mid-’70s through the mid-’90s), and was followed by a few other attempts at series and mini-series before Marvel abandoned the character; Dark Horse comics picked up the license in 2003, and has published its own comics versions of Conan ever since. 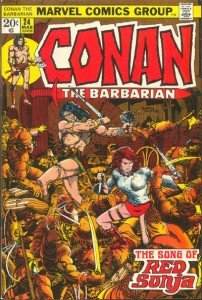 Conan the Barbarian #1, cover-dated October, 1970, had a script by Marvel mainstay Roy Thomas and art by Barry Smith, an English artist who’d had a few superhero stories published in Marvel books at that point. The art in the first few issues is primitive, but Smith gained experience rapidly, and by issue #4’s “Tower of the Elephant” it’s quite a bit better, increasingly intricate and other-wordly; by issue #6’s “Devil Wings over Shadizar” (the first issue I remember reading), it’s become a combination of delicately detailed prehistoric architecture, weird monsters, alluring women and Conan himself, young, panther-lithe and in the middle of all the action. All of this was enough to make the comic into Marvel’s first bronze-age hit. Smith’s gorgeous art took time, though, and necessitated some scheduling changes: Gil Kane does the pencils in issues #17 and 18, 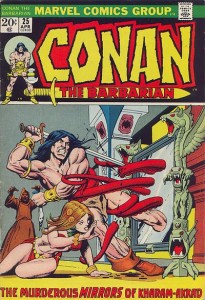 while issue #21 has Smith layouts over Craig Russell pencils, and #22 is a reprint; by issue #24, Smith is done, off for a career in fine-art illustration and prints, with only an occasional return to the comics medium.

Fortunately, his replacement in issue #25, John Buscema, was the perfect choice: a rock-solid storyteller, skilled at showing the essential personality of a supporting character (a guard, a thief, a dancing girl) in just a few quick lines; his Conan is older, stockier, more menacing and more grounded in gritty reality than Smith’s, and quickly became the standard version. This is helped because of Buscema’s longevity: he sticks around as penciller, off and on, through issue #190, in 1987 — a 14-year run. Thomas stays as writer through 1980, so the two have a productive seven-year

partnership that makes Conan one of Marvel’s steadiest titles, and one of the few that’s popular with many readers who don’t care about superhero comics.

With Thomas/Buscema (and, often, inker Ernie Chan working over Buscema’s layouts) as the default setting, the trick is identifying which other artists spend time in the Hyperborean Age. The first, and one of the most prominent, is Neal Adams, who provides both pencils and inks for the story in Conan #37. That’s followed by Rich Buckler in #40, Mike Ploog in #57, Jim Starlin in #64, Val Mayerick in #69, and Howard Chaykin in #s 79-84 (the only multi-issue run, and not from an artist you’d necessarily expect). There’s also Tony Dezuniga in #87, and younger brother Sal Buscema in #92; Buscema does all the others through issue #115, 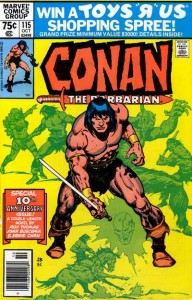 the tenth-anniversary book and Thomas’s last as scripter. J.M. DeMatteis takes over the writing chores at that point, continuing with Buscema art until #127-130, which are pencilled by Gil Kane. With #131, Bruce Jones takes over as writer; Kane continues as penciller through #134, followed by a fill-in issue with art by Marc Silvestri and script by Steven Grant in issue #135, and then a return to Bruce Jones/Buscema with #136. Alfredo Alcala has art in #137, with Val Mayerick in #138 and 139; then, there’s a fill-in in #145, written by Alan Zelenetz and drawn by Richard Howell.   Mary Jo Duffy writes #146 (over Buscema pencils — still the default setting at this point), and then Jones is back with #147-149, to be replaced as writer by Michael Fleisher in issue #150. Gary Kwapisz does the art in #154, 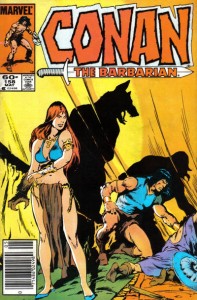 and Bob Camp in #160; otherwise, it’s Fleisher/Buscema through issue #171 — except for a fill-in with a script by Larry Yakata (no, I’ve never heard of him, either), with Kwapisz art in #164. Jim Owsley (who eventually changed his name to Christopher Priest) becomes head writer with issue #172, and he and Buscema stay through Buscema’s last issue in #190, although #186 is another fill-in (the writer is Don Kraar and the penciller Mike Docherty, two other people that I’ve never heard of). The artist with the unenviable task of replacing him is Valdis Semeiks, who draws issues #191-200 and 202-213, still with scripts by Owsley (the one exception, issue #201 has early art by the

Kubert kids — Andy on pencils, and Adam on inks), and at least has the good fortune to have Alfredo Alcala inking most of his issues. Owsley’s replacement is Charles Santino, who stays with the Semeiks/Alcala art team through issue #220 — pretty much the end of the ’80s, and a good place to end this installment. As always, check the discount racks at the west end of the story for many of the Conan books mentioned here, most for only 99 cents (no, not the Smith ones, although all of those are available as regular back issues…).

With 40 years of experience in comic reading, collecting and reviewing, English Professor Phil Mateer has an encyclopedic mind for comics. Feel free to ask Phil about storylines, characters, artists or for that matter, any comic book trivia. He will post your questions and answers on the AABC blog. His knowledge is unparalleled! He is also our warehouse manager, so if you are looking for that hard to find comic book, ask Phil!
View all posts by Phil →
This entry was posted in Comics History, News & Promos, Reviews and tagged Barry Smith, Conan, John Buscema, Roy Thomas. Bookmark the permalink.