Phil’s Reviews Special: Back to the Klondike (for the first time)

It Came From the Back Room will return with new installments in a week or two (Conan back issues!), but there’s nothing new to put out right now, because I’ve been on vacation: Diana and I took a one-week cruise to Alaska. Now, normally that wouldn’t matter to this blog, but it so happens that Alaska is the scene of one of the greatest comic stories involving one of comics’ greatest creations, by one of comics’ greatest creators: in order, that would be the story “Back to the Klondike,” appearing in 1953 in Four-Color Comics #456, the second comic starring Uncle Scrooge, written and drawn by the wonderful Carl Barks. It’s the story that reveals how Scrooge first made his fortune, during the Alaskan Gold Rush of the 1890s.  Here, from the Another Rainbow black-and-white Carl Barks Library hardcover, he’s explaining to Donald Duck and his nephews how he worked his claim at White Agony Creek, and then went into the tough mining town of Dawson with the product of his labors, only to end up at the Black Jack Ballroom, whose star singer/showgirl was called Glittering Goldie (click on each page to get a bigger picture of it): 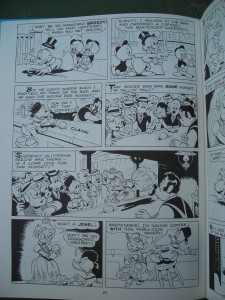 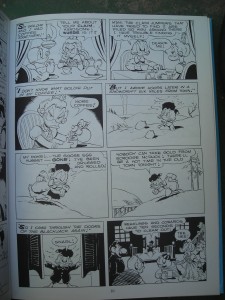 … that fourth panel on the first page, with the eye-popped spectators, gets your attention, and then Goldie herself swoops in; look at how she’s the center of emphasis in every panel she’s in at first, and literally glitters. Then, there’s that half-page splash on the third page, once described by comics critic Tony Isabella as “Jack Kirby with ducks”; look at the detail, the choreographed violence, and the way the stairs cut diagonally across the top left of the panel, making Goldie a quiet but secondary focus, and you can see why. Drop in the lesson about making your money square, and it’s a powerful four-page fable; the overall story, at 32 pages, is even better. I first encountered it in the early ’70s, when it was reprinted in a later Uncle Scrooge comic (minus most of the four pages here, since their violent action, not to mention the kidnapping, was considered inappropriate by Disney by then) and loved it; it wasn’t until later that I realized how much of it is “true”: Skagway, Whitehorse, Dawson, and Uncle Scrooge’s general prospecting setup are all based on the actual Gold Rush, something that Barks, an amateur historian, knew quite a bit about. He did a couple of later stories about Scrooge’s time in Alaska/Canada, too (and modern Duck Master Don Rosa has also done a few, expanding on the events here in his Life and Times of Scrooge McDuck), and the romance and adventure of that period has always stuck with me, so actually making it to the frozen north was something I’d wanted to do for over 40 years. No, the cruise didn’t make it all the way to Scrooge’s claim (it’s far inland), but we did get to Juneau, only about 50 miles south of Skagway and the start of most miners’ journeys. Juneau, although it’s the capital of Alaska, has no roads leading into or out of it; it’s only accessible by plane or boat (click on the picture):

and in places doesn’t look all that different from 100 years ago: 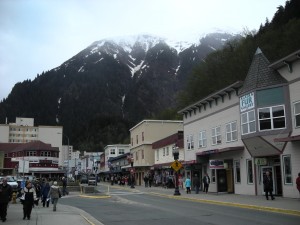 … including its Red Dog Saloon, which still has sawdust on the floor, if no Glittering Goldies:

The day after Juneau, the ship traveled to Glacier Bay National Park. No, Scrooge never went there (the old skinflint would have ignored the scenery in his search for gold), but it’s a good example of why nature lovers love the area now. At first, the weather was overcast and hazy: 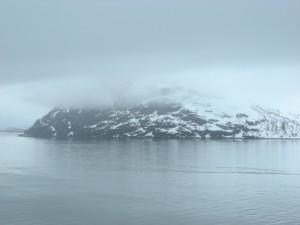 … but then the sun came out, and… well, I’ll leave you with a few last photos; when the summer sun in Phoenix gets to be too much, take some refuge in these instead (and, yes, clicking on each of these will give you a much bigger picture too): 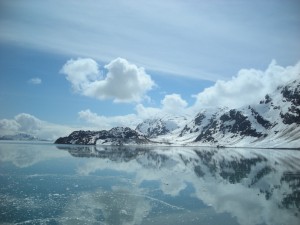 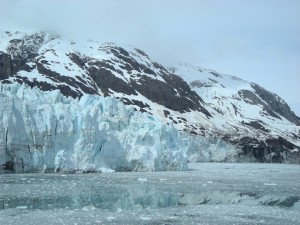 With 40 years of experience in comic reading, collecting and reviewing, English Professor Phil Mateer has an encyclopedic mind for comics. Feel free to ask Phil about storylines, characters, artists or for that matter, any comic book trivia. He will post your questions and answers on the AABC blog. His knowledge is unparalleled! He is also our warehouse manager, so if you are looking for that hard to find comic book, ask Phil!
View all posts by Phil →
This entry was posted in Comics History, News and Events and tagged Alaska, Carl Barks, Phil's stupid vacation pics, Uncle Scrooge. Bookmark the permalink.