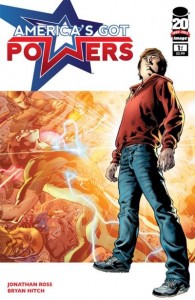 Ross is the former British talk-show host who’s a big comics geek, and has dabbled in writing them before (Turf, about Prohibition-era vampires, came out a year or two ago). Here, he’s snagged Bryan Hitch as artist, which helps his cause considerably. The comic itself is nakedly commercial: it’s a mashup of J. Michael Straczynski’s  Rising Stars (radiation from a mysterious meteor causes a bunch of kids whose mothers are exposed to it to be born with super-powers), America’s Got Talent (there’s a reality show wherein the kids compete, and the winners get to be on a JLA-like super-team) and The Hunger Games (the show is manipulated by evil government and political types, who make it 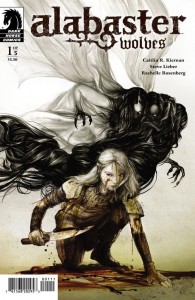 deadly because they’d prefer the kids with powers all either die or get used for their own nefarious purposes). Tommy, the viewpoint character, is the only kid exposed who apparently didn’t get any powers. Apparently….  Anyway, all of this is the occasion for both media social satire and arena-style super-powered combat and adventure, and at 36 pages for $2.99 it’s a bargain: the Hitch art is expansive, detailed and cool to look at,and there’s a buzz of snarky energy that runs through the book, making it a fun, solid read that ought to become a hit. 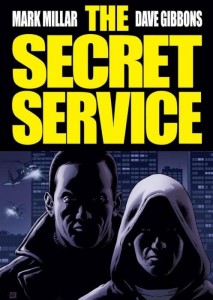 Two other first issues of limited series this week: Alabaster is about an albino girl who’s a monster-killer, prompted by an angel of vengeance to seek out and put down vampires, werewolves and the like. Here, she encounters another girl at a South Carolina bus stop; they talk and, eventually, fight, since the girl turns out to be more than she seems. There’s a riddle contest first, and both the script and the art deliver a Southern Gothic folk-tale flavor that’s both spooky and compelling.

Secret Service is standard Millar, about an aimless British teen whose uncle recruits him into a super-espionage agency. It’s just what you’d expect from Millar (the opening sequence, involving a kidnapped Mark Hamill and a botched James Bondian rescue, 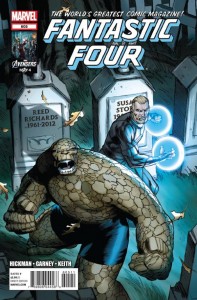 especially so).  While the main plot doesn’t move forward much in this first issue, the big attraction is the Gibbons art, and it’s as precise, clear and well-constructed as always; the scenes of the teen, trapped in his British lower-class life, are especially good. 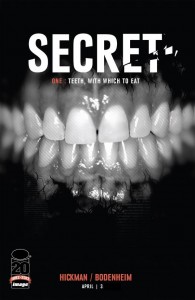 Two from Hickman: the FF is a one-shot tale of Reed and his father time-traveling into the future to observe the long history of the FF (long as in the next 4000 years), but it really turns out to be about the Reed/Ben relationship, and it’s quiet, imaginative and just about perfect. Secret is one of his new creator-owned books for Image, and it begins a twisty, complicated and high-stakes game of industrial spying and global power and intrigue. The art is just OK — it’s got some nice panel layouts, but suffers from having most of its characters look too much alike (they’re all middle-aged, upper-class businessmen in suits) — but the story itself is right up Hickman’s alley, and looks like it’ll provide a lot of nasty fun.

This second issue continues its sf/fantasy tale about two Romeo-and-Juliet lovers and their baby girl, whom everyone in the galaxy wants for some shadowy reason — which means they’re moving from planet to planet, dodging bounty hunters and the like. Vaughan makes their bickering-but-loving relationship both attracrtive and realistic, and Staples continues to develop imaginative alien creatures and tender parental moments with equal ease; between Secrets, America’s Got Powers, Prophet, Supreme, and this (not to mention older titles like Chew and Walking Dead), Image is making a big creative splash 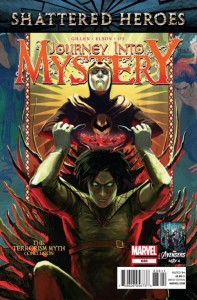 this year, and if you aren’t looking at any of their books, you’re missing out on some of the best comics on the stands.

These books are linked because they’re both mostly about the retro-teened Loki, who continues to be one of the best and most complicated characters in the Marvel Universe.  JIM is really Loki’s book, and Gillen, who has a real knack for 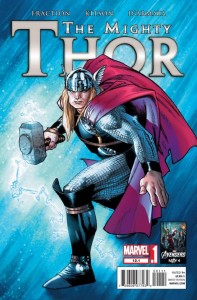 combining humor, angst and myth, is never boring (as a plot point, he provides a double-page centerfold D&D-type board game here that’s an unexpected delight). For his “.1” issue of Mighty Thor, Fraction looks into the childhood history of Thor and his Asgardian half-brother, via a long conversation between Volstagg and Sif; you’d think that would be boring, but not so; it turns out Kitson gets a lot to do, not the least of which involves the story of how Volstagg became so voluminous. Add in the way Loki’s motivations are left unresolved (is he a hero now? The same old villain? Something in between?), and you can see why he’s such a far cry from the generic, Shakespearean-dialogued bad guy 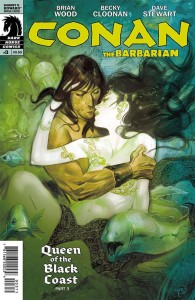 created by Lee and Kirby all those years ago.

There’s not much to note here, except a recommendation to buy: Conan, and its story of his meeting with Belit, the pirate queen, and their hot-and-heavy relationship continues to benefit from Cloonan’s unusual-but-somehow-perfect art, and even someone who’s read a couple of hundred Conan comics (like me) finds it hard to resist. 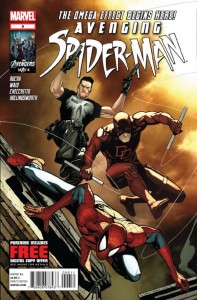 Fans of the current Daredevil or Punisher series should get this, since it’s by the writers of those two books, and is the first part of a three-comic crossover. DD fans know that Matt Murdock has possession of an unstable-molecule data disk with incriminating information on all the bad-guy shadow organizations of the Marvel universe — Hydra, AIM, etc. — and that they’ve been teaming up against him to get it back, without much success. That’s the 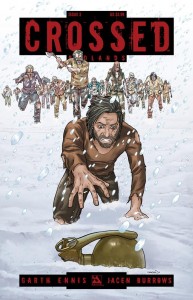 starting point for this story, and with those two writers involved, it promises to be a gritty, witty and brainy ride.

The end of Ennis’s arc on this ongoing series about a world overrun by psychotic… well, not zombies, but close enough. Just as downbeat as you’d expect, with the reader-centric attraction of all zombie apocalypse tales: what would you do in similar circumstances? Would you survive, or end up fodder for the other side?

Two Avengers books by Bendis: Assemble has the team fighting a reformed Zodiac, who think they’re the good guys (although they’re pretty clearly getting suckered), and are chasing after a bunch of standard Marvel mega-powerful maguffins (there’s an Ultimate Nullifier involved in this issue, so there’s probably Cosmic Cubes and similar 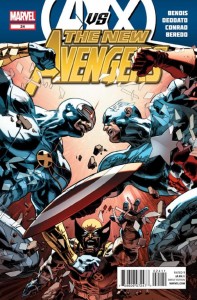 hardware close behind). Bagley and Bendis are a smooth team, after all those years on Ultimate Spider-Man, so both the action and the exposition click along smoothly and entertainingly. So too for New Avengers, where the Deodato art is similarly expressive and fun to watch. This is billed as an Avengers Vs. X-Men crossover, although it works a lot like those Avengers issues of the “Siege” and other crossover stories, not covering the main action but filling in the spaces between big battles; here, it’s a lot of Jessica and Luke Cage discussing what to do about their baby, since living with it at Avengers Mansion has turned into an increasingly hazardous idea. Should Jessica leave? Will Luke come with her? Will fate keep these two crazy 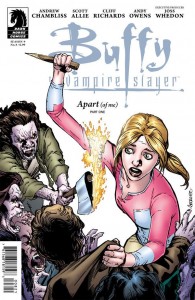 kids together, or apart? It’s pretty sudsy soap opera, but with characters that Bendis has written (and, in Jessica’s case, created) over a lot of years, so it has more emotional impact than you might expect.

I haven’t said before, but I bought ’em and liked ’em” category. BTVS builds on its shocker from last issue (Buffy’s a robot? But with her brain?); Winter Soldier has typical smooth Brubaker/Guice action involving Bucky, the Black Widow, Soviet sleeper agents, Dr. Doom, the Red Ghost, a rogue Doombot and probably a few more pieces I’ve forgotten — you’d think it would be confusing, but instead it’s suspenseful fun; Uncanny X-Men has nice-looking art and Gillen, although it suffers from one of 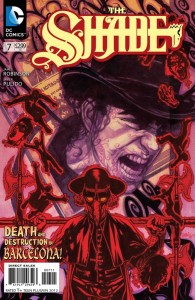 those the-bad-guy’s-so-powerful-he-can-do-anything plots; finally, Shade wraps up its current story-within-the-story featuring Shade’s daughter, and while it also suffers from a too-powerful character (Shade himself, who resolves things all too easily once he decides to lend a hand), the art is so nice-looking, and the dialogue and narrative so engaging, that it’s easy to forgive it.

With 40 years of experience in comic reading, collecting and reviewing, English Professor Phil Mateer has an encyclopedic mind for comics. Feel free to ask Phil about storylines, characters, artists or for that matter, any comic book trivia. He will post your questions and answers on the AABC blog. His knowledge is unparalleled! He is also our warehouse manager, so if you are looking for that hard to find comic book, ask Phil!
View all posts by Phil →
This entry was posted in New Comics, Reviews and tagged Alabaster, America's Got Powers, Avengers, Becky Cloonan, Bryan Hitch, Buffy, Conan, Crossed, Daredevil, Dave Gibbons, Fantastic Four, Fiona Staples, Journey into Mystery, Loki, Mark Millar, Saga, Secret, Shade, Spider-man, Thor, X-men. Bookmark the permalink.