It Came From the Back Room #46 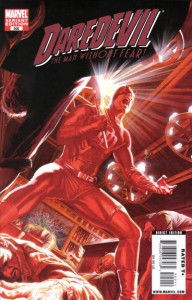 Standard recap: I’m slowly going through AABC’s one-million-plus back-issue room, restocking the boxes on the sales floor and pulling stuff to sell as discount/overstock/special items (these are featured at the discount racks at the west end of the store for a couple of weeks after each post, and then go to the discount racks on the east end of the store for a few weeks, and then disappear into our warehouses, so get them while you can). I’m going through the alphabet backwards (don’t ask), and at my speed (especially with the school semester in full gear), this amounts to a two-and-a-half-year project.  This week, we’re still featuring the letter “D,” specifically, the last half of Marvel’s Man Without Fear:

Frank Miller, whether writing or drawing or both, is a hard act to follow, but we’re picking up this week right after the “Born Again” story arc in DD #227-233. Issue #234 is a fill-in written by Mark Gruenwald that introduces the D-list villain Madcap, which is no big deal — but the artist is Steve Ditko, so it’s worth a look. Ditko does the breakdowns for #235, too, featuring Mr. Hyde as the bad guy, but the better news is in #236, because that one features the art of Barry Windsor-Smith, and guest-stars the Black Widow; it’s written by Ann Nocenti, who returns 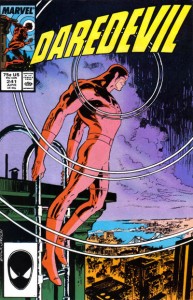 as regular scripter with #238, drawn by Sal Buscema and featuring a DD/Sabretooth battle that ties into the then-current “Mutant Massacre” X-crossover. Nocenti then settles in for a long, interesting run: she’s got a keen sense of character, and an offbeat rhythm to her plots and themes that’s a little off-putting at first, but grows on you as you get used to it. There are musical artists for a while at first — Todd McFarlane on #241 the most notable, but a Keith Giffen job on #247 is interesting, too, as is a two-part Wolverine crossover in the next two issues with art by Rick Leonardi and the great inker Al Williamson. Things really settle in with #250, though, and the introduction of 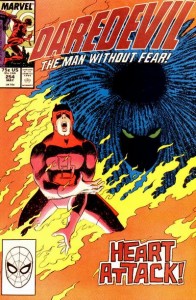 John Romita, Jr. as regular penciller — especially since Williamson stays on as inker.

They and Nocenti end up making a good team — their knack at drawing regular guys, cool-looking mobsters and sexy women serves them well over the first few issues, as Typhoid Mary, the schizo-pyrokinetic hit woman, gets introduced in #254 and becomes the Kingpin’s enforcer in one personality, and a love interest for DD in another. Her battles with Our Hero continue all the way through issue #266, with a Punisher guest-shot in #257 (and a skippable fill-in in #258), a climactic fight in #261 which sees a badly-beaten DD left unconscious under a bridge, and an 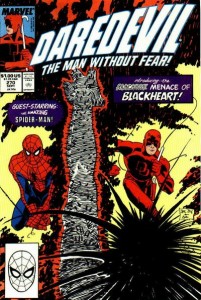 “Inferno” crossover that sees DD battling demons in New York City from issue #262-266 (there’s another Ditko fill-in to interrupt things in #264), and which ends with a Christmas issue in #266 that sees DD and Mephisto having a drink together in a New York bar. Great, addictive stuff, and Nocenti apparently likes the occult stories that emphasize the latter part of DD’s name, because in #270 she introduces Mephisto’s son, Blackheart (which sees Romita Jr. getting to draw Spider-Man as a guest star), and in issues #278-282 offers a long story guest-starring the Inhumans and Black Bolt’s son that also features Blackheart, Mephisto, and a trip through hell that’s resolved by a Silver Surfer appearance at the end; all of this is by Romita Jr. and 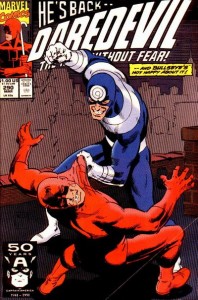 Williamson (except for the fill-ins), and is quite a bit of weird fun.

Romita Jr. leaves with #282, though, and things begin to flatten out, although Nocenti sticks around for one more offbeat arc, as she chronicles a disoriented Matt Murdock ending up back in New York City from hell, suffering from amnesia and getting work as a boxer in a gym (no one, including him, realizes that he’s blind), and somehow, eventually, fighting a Bullseye who’s been donning the Daredevil costume — which means that Matt’s in Bullseye’s regular outfit. The art here is mostly Lee Weeks (although Greg Capullo does #286), while Kieron Dwyer pencils the last two issues of the story, ending in #290. Nocenti’s gone, too, with 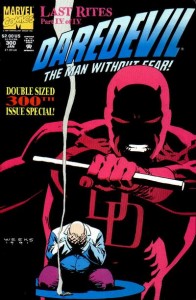 issue #291, and new writer D.G. Chichester comes aboard with issue #292. Thus begins a new, very ’90s-ish era of DD, one that goes by smoothly but with very little staying power: there are Punisher and Spider-Man crossovers, and lots of different artists, and nothing that sticks in the memory. The next item of note occurs a few years later, in issue #319, when Marvel, through Chichester and artist Scott McDaniel, tries to duplicate the “Born Again” buzz by deconstructing DD, causing him lots of problems and, eventually, giving him a brand-new costume, in the “Fall From Grace” arc. Issue #319 is hot for a while, but the story itself is 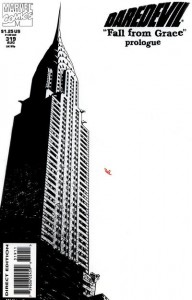 pedestrian and tired, and by issue #331 Chichester and McDaniels are gone, replaced by Gregory Wright and Tom Grindberg, people that you need at least a master’s degree in comcis history to have ever heard of (this seems to happen a lot in ’90s Marvel books, all the “name” artists having, at that point, run off to form Image Comics). Chichester is back from #239-242, but writing under “Alan Smithee,” the pseudonym famously used by Hollywood screenwriters when they want to disown a script after it’s been butchered by others; you can draw your own conclusions about that. There’s a welcome hiccup of quality

in #343, thanks to a Warren Ellis script, and DD gets his familiar red costume back in #345 (to no one’s surprise); J.M. DeMatteis does the writing chores for a while, but there’s little to remark on until Karl Kesel takes over story-writing chores with #353, and brings at least some interesting characterization back to the book, helped along by artist Cary Nord (and, in issues #363, 366-368 and 370, old DD hand Gene Colan). Kelly leaves with #375, and the first volume of Daredevil follows a few issues later, with #380, cover-dated October, 1998.

Not to worry, though, since volume 2 begins the next month, with a big

splash supplied by then-rookie writer (but already hot geek-centric director) Kevin Smith, whose first eight-issue arc, with art by Joe Quesada and Jimmy Palmiotti, was hot then, and still hard to find in the original issues even today. David Mack writes issues #9-11, still with art by Quesada and Palmiotti, which introduces Echo to the Marvel Universe (although she just “died” over in Moon Knight).  Brian Michael Bendis contributes his first DD story in issues #16-19, while Mack puts down the word processor and picks up the art chores; by issue #26, Bendis is back, and the art is handled by Alex Mallev, a collaboration that will become one of the longer- 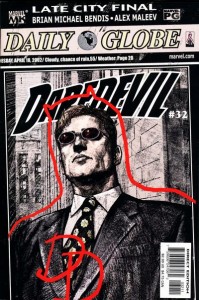 running and more influential ones in DD history (it’s both startling and a little sad to realize that it began over ten years ago). By issue #32, the team has shaken up the book by revealing Matt Murdock’s secret identity to the public, a move that echoes through the title even today; from there through the end of their tenure, with issue #80, it’s one well-drawn and interesting five-issue arc after another, as Daredevil remains one of the most consistently-entertaining and unpredictable books on the stands, culminating with Murdock’s eventual arrest and imprisonment in Rykers (where the Kingpin and many other bad guys lurk), awaiting his trial on federal 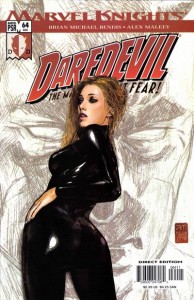 charges because of the many laws he broke while walking the tightrope between his lawyer and costumed identities.

Fortunately, while Bendis and Maleev have left, the new team consists of hardboiled-fiction master Ed Brubaker, Micheal Lark and Stefano Gaudiano, and they pick up the challenge left by Bendis with aplomb, beginning yet another long quality run on the title, all the way through issue #119 of volume #2, and its renumbering back to volume one with DD’s 500th issue after that — a little over 40 issues in all. 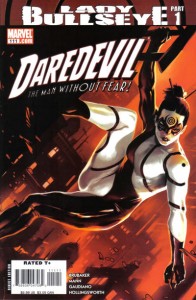 The next year on the title, #s 501-512, can’t live up to the quality of its predecessors — writer Andy Diggle isn’t bad, but he’s saddled with yet another tear-DD-down assignment culminating in the unfortunate and stupid “Shadowland” crossover — but the good news is that the title’s rebirth last year, with issue #1 of volume 3, has been one of the better books on the stands, thanks to Mark Waid’s scripts and very nice-looking art by Paulo and Joe Rivera and Marcos Martin. As ever, Matt Murdock’s swashbuckling alter ego has found it easy to shrug off a few bad stories, and come out ahead with a decent and sympathetic creative team — between the Lee-Thomas-Conway/Colan years, the Miller era, and the Nocenti/Romita Jr. run (let alone the more-recent Smith/Quesada arc, followed by the Bendis/Maleev and Brubaker/Lark/Gaudiano runs), he’s had a lot better luck with creative teams than almost any other Marvel hero.

With 40 years of experience in comic reading, collecting and reviewing, English Professor Phil Mateer has an encyclopedic mind for comics. Feel free to ask Phil about storylines, characters, artists or for that matter, any comic book trivia. He will post your questions and answers on the AABC blog. His knowledge is unparalleled! He is also our warehouse manager, so if you are looking for that hard to find comic book, ask Phil!
View all posts by Phil →
This entry was posted in Comics History, Marvel, News & Promos, Reviews and tagged Al Williamson, Alex Maleev, Ann Nocenti, Brian Michael Bendis, Daredevil, Ed Brubaker, Gene Colan, John Romita Jr, Kevin Smith. Bookmark the permalink.