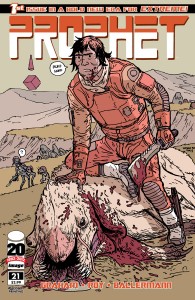 This is a second printing of a book that came out a few weeks ago, a revival of one of Image Comics’s mainstays of the ’90s — but it sold out so quickly, and unexpectedly, that even I didn’t get a copy. It’s here now, though, and it’s worth a look: it’s about as far away from the Rob Liefeld original as possible, involving a haunting far-future-Earth story, as John Prophet awakes from a centuries-long sleep and must cross a very alien landscape to carry out a mysterious mission. Graham, the writer, is the creator of King City, which got a lot of attention when it came out in 2010 and 2011, while Roy, a new artist (you can look at one of his shorter online pieces here), has an sf/European style that makes the book like like a lost serial from Heavy Metal. Lots of points for trying something different, and, assuming they can sustain the momentum, it looks like this book will be a deserved hit. 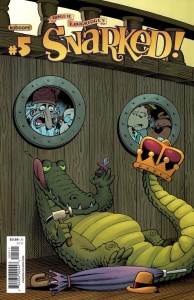 Another very individual book: Langridge worked on Boom Studio’s Muppet books, and was last seen writing Thor, the Mighty Avenger, last year’s all-ages version of the character that was drawn by Chris Samnee, beloved by critics and ignored by fans. This is a mashup of characters from Lewis Carroll (there’s a W. C. Fields-like walrus, a carpenter, and snarks and boojums), and involves Scarlett, a nine-year-old girl who’s also the princess of a seaside kingdom, and her search for her missing father, the King, who’s been kidnapped by a cabal of royal advisors who are up to no good (aren’t they always?). It’s an epic adventure tale, told in a cartoony style and with lots of humor, and it’s one of those books that both kids and adults should be able to get an equal kick out of; if you have preschool children you’d like to read a good story to, or grade-school kids interested in comics, this would be a fine choice. 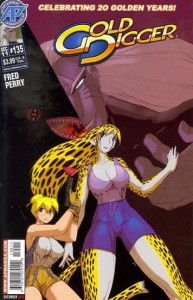 I don’t often mention this title, but it’s been around for over 20 years (and over 200 issues in its various incarnations), and it’s a dependably-entertaining book about an artifacts hunter, Gina Diggers (the title character), her were-cheetah sister Brittany, and a sprawling cast of characters that ranges over centuries and most of the known and unknown universes. Don’t be intimidated by the book’s long history, though: Perry’s good at explaining as he goes along, and making everything accessible. This issue, or one of the collections, makes as good a starting point as any; dive in and discover a new and very detailed world that offers a lot of technically- and magically-savvy fun. 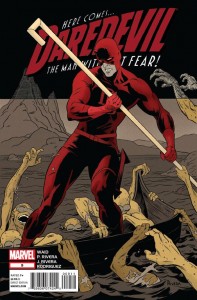 I’ve sung the praises of this book before, so let’s just do it again briefly here: the Riveras are back on the art, and their take on Matt’s radar sense continues to be one of the best visual bits around; the plot, wherein DD has to discover who’s been stealing coffins from a cemetery — from the bottom — involves vast underground caverns and exactly the Marvel villain you’d expect, and Waid’s story continues to provide both clever and heroic moments in equal measure. Bonus points for the continuing presence of the Black Cat, playing Catwoman to DD’s Batman; her bad girl/good girl persona is a good match for Waid’s swashbuckling version of Matt, and I hope she sticks around the book for a long time. 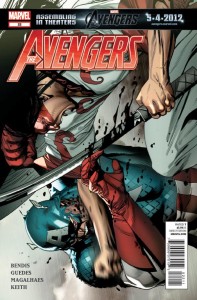 Two more chapters in the continuing saga of Earth’s Mightiest Heroes, intertwined enough that you should be reading them both (although the order doesn’t matter), involving Norman Osborn and his latest schemes to take over the country. Bendis may be sneaking in subtle political commentary here — take the remnants of Osborn’s previous takeover in Siege, and the way they’re 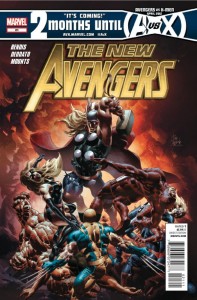 imbedded in the government and working to discredit the Avengers and advance their own shadowy agenda, and substitute “Republicans” for “remnants” and “Obama” for “Avengers,” and… well, maybe it’s just me (especially because the Obama actually in the book is kind of a weasel) but it gives an intriguing subtext to the proceedings. This looked at first like it would be a boring repeat of the Siege stuff, but it’s become better as it rolls along, and the promise of a conclusion within the next two months (after which Bendis has been laying the groundwork for a big Ultron tale next, as his swan song on these books) gives my inner fanboy a lot to look forward to. 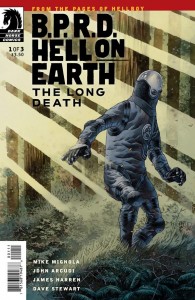 Like Gold Digger, this is another book that I don’t plug enough: even without Hellboy, it’s got intriguing characters, and is part of a years-long storyline wherein much of the Earth has been threatened with Cthulhu-like occult forces — who may be winning. Mignola and Arcudi have been writing these books together for so long that they make a smooth, efficient team, and somehow they always find artists who can shine at both the quiet, human moments and the stark horror — Harren, in this issue, has some great nature shots for the former, and two long scenes that bring the latter with masterful, shocking violence. Brains and gore: what more do you want from a horror book? 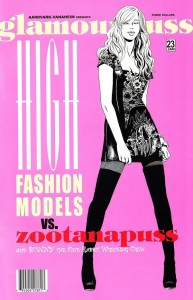 Still schizophrenic (the book, not Sim), as the first half involves a gorgeous-looking Zatanna parody (with high-fashion models and bunnies added, all in Sim’s photorealistic style), while the back of the book continues his well-researched and equally gorgeous-looking essay on, yes, photorealism in comics, as he continues to cover September 6, 1956, the day that Alex Raymond and Stan Drake had a meeting, and one of them died. Trying to reconcile the parts of this book is practically impossible, but it’s one of the best-produced comics out right now, with both art and lettering that benefit from Sim’s over 30 years in the business, and anyone who cares about comics art should be checking it out. 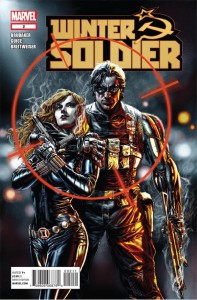 Another dependable superhero project from Brubaker and Guice, as Bucky and Natasha deal with Russian sleeper agents. Brubaker has become very good at combining gritty, cinematic secret agent stuff like this with gonzo comics plots (here, it’s a super-villain team-up involving the Red Ghost trying to kill Dr. Doom), and the result is a smooth, very good-looking story that both respects and entertains its readers.

I push this book every month, so if you haven’t read it yet you probably don’t care about it — but pick this issue up anyway: it’s a perfectly normal example, by the regular creative team, of what makes it so addictive: plots about two of Snow and Bigby’s cubs (one who’s training to become the new North Wind, and one who’s being seduced by an evil toy boat, leading to a “Babes in Toyland” adventure next month), while a few pages are devoted to the remnants of Castle Dark (and a subtle trap laid therein), and the monkey Bufkin’s attempts to liberate Oz from a dictatorship. Sound confusing? Seriously, just read it: you’ll be taken by the art and intrigued by the story, and then you’ll become a fan too, and I won’t have to keep bugging you every month about it.

With 40 years of experience in comic reading, collecting and reviewing, English Professor Phil Mateer has an encyclopedic mind for comics. Feel free to ask Phil about storylines, characters, artists or for that matter, any comic book trivia. He will post your questions and answers on the AABC blog. His knowledge is unparalleled! He is also our warehouse manager, so if you are looking for that hard to find comic book, ask Phil!
View all posts by Phil →
This entry was posted in New Comics, Reviews and tagged Avengers, B.P.R.D., Daredevil, Fables, Fred Perry, Glamourpuss, Gold Digger, New Avengers, Paolo Rivera, Prophet, Roger Langridge, Simon Roy, Snarked!, Winter Soldier. Bookmark the permalink.