It Came From the Back Room #42 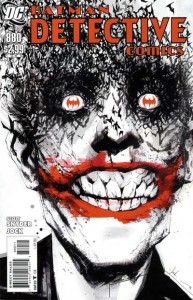 Standard recap: I’m slowly going through AABC’s one-million-plus back-issue room, restocking the boxes on the sales floor and pulling stuff to sell as discount/overstock/special items (these are featured at the discount racks at the west end of the store for a couple of weeks after each post, and then go to the discount racks on the east end of the store for a few weeks, and then disappear into our warehouses, so get them while you can). I’m going through the alphabet backwards (don’t ask), and at my speed (especially with the school semester in full gear), this amounts to a two-and-a-half-year project.  This week, we’re featuring the second half of DC’s flagship title (continued from last time): 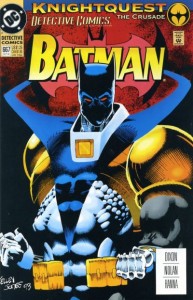 Last time, we put out Detective back issues through the 1993 “Knightfall” bat-event that saw Bruce Wayne’s back getting broken by the villain Bane, and the former Azreal taking over as Batman; that ended with the suitably apocalyptically-numbered Detective #666 (although most of the major beats in the story were taking place in DC’s companion Batman title; it and Detective at this point were telling one interlocking story, with a new chapter every two weeks). The next issue sees Azreal in the newly-modernized batsuit, is by writer Chuck Dixon and penciller Graham Nolan  (just like the previous dozen or so issues 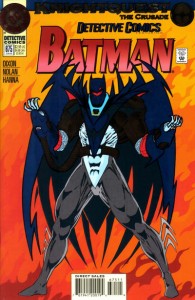 had been), and begins the follow-up “Knightquest” storyline, as a wheelchair-bound Wayne searches for a miracle cure, and the new (and considerably more brutal) Batman learns the ropes; this leads seamlessly into the “Knightsend” finale, which starts in Detective #676 and finishes in #677.  Dixon and Nolan remain the creative team for almost all of these, and provide competent but not particularly memorable chapters in the overarching story; the best thing about these issues is the Kelley Jones covers. 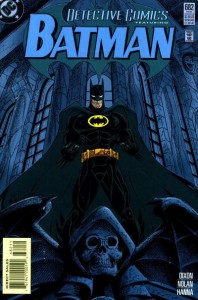 Dick Grayson in the bat-suit; to the surprise of absolutely no one, Bruce Wayne has returned and donned the cape and cowl again by issue #682. Dixon and Nolan continue through #689, after which Staz Johnson comes in as artist through #694; Nolan returns with #696. The main driver of plots at this point is the crossover concept: “Knightfall” and its sequels had done so well that DC supplies a number of similar multiple-part events, some big and some small: there’s “Contagion” in Detective #695-696, “Legacy” in #s 700-702, and “Final Night” in #703; following a year’s respite from #704-718, the crossovers begin again in earnest with “Cataclysm” 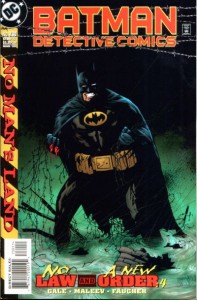 (Gotham City is severely damaged in an earthquake) in #s 719-721, followed by “Aftershock” in #s 722-726.  Nolan continues as artist through all of this, except for Jim Aparo art in issues #716, 719, 722 and 724 (with a guest art job by Alex Maleev in #723). After that, “No Man’s Land,” where the federal government abandons Gotham as too damaged by the quake to be salvageable, ramps up in issue #727, and will provide the main plots in all the bat-titles for the next year and more; Dixon leaves with #729, and is replaced by, for one issue each, Bob Gale, Devin Grayson, Greg Rucka, Gale again, Kelly Puckett, Rucka again…. well, there isn’t much continuity. Maleev does the art for #730, with a 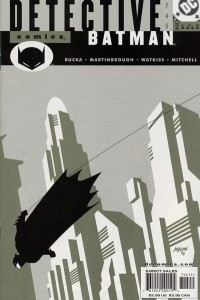 different artist each issue after that — probably the most notable is Mike Deodato in #736.

Scripter Rucka comes back with #639, and wraps up the “No Man’s Land” saga in #741; after that, he’s on board for the revival/relaunch in #742, mostly with artist Shawn Martinbrough through #746, and in #s 749-752, 758-761 and 763-764. This is a reasonably stylish run, suitably pulpy and blessedly crossover-free (except for an installment of the Gordon-gets-shot “Officer Down” in #754), and is often distinguished by its slickly-designed 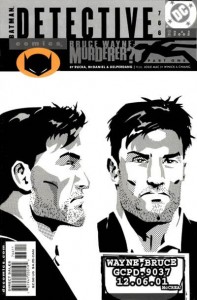 covers by Dave Johnson (although other cover artists, like John McRea, creep in too). Issue #766 sees the debut of the next story “event,” though: “Bruce Wayne, Murderer?” wherein you-know-who gets framed for… well, the title says it all. It and its sequel (“Bruce Wayne: Fugitive”) continue through #772, all with scripts from Rucka and art by a number of people, although Steve Lieber is the most frequent collaborator. Rucka leaves with issue #775, and is replaced by Ed Brubaker in issues #777-786; Brubaker, as those who’ve read his Criminal and Fatale know, is fully as good at pulpy noir stories as Rucka, and so keeps the title energized. Probably the most interesting story in this period is the five-part “Spore,” a 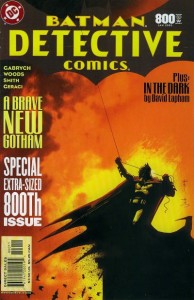 backup story by J.C. and Michel Gagne in issues #776-780 wherein Batman gets infected by, yes, an alien spore, and grows to take over the world; it has a frantic, crude energy and indy/alt comic/Heavy Metal vibe that’s unlike any other bat-story ever produced.

The next sustained team runs from issues #791-800 , and is writer Anderson Gabrych and penciller Pete Woods (I know: I don’t remember either of them either, possibly because the crossover story that came to define event fatigue, “War Games,” occurs in issues #797-800). That’s followed by “City of Crime,” a Detective-contained serial written and laid out by David Lapham (then fresh off his critically-beloved Stray Bullets), which runs from #801- 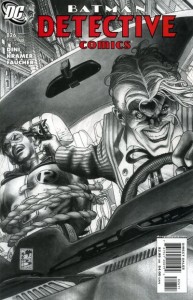 The jump-a-year-ahead line-wide DC stunt “One Year Later” begins in issue #817, but it isn’t until issue #821 that the two best parts of this most-recent period in Detective history show up: writer Paul Dini and artist J.H. Williams III, who team up in that issue; Dini, who’d honed his craft in the Batman TV cartoons (and is most-revered among fanboys for creating Harley Quinn), also provides scripts for #s 822-824, providing frequently-clever takes on classic bat-villains like the Penguin and Poison Ivy; he’s also got a memorable Tim-Drake-vs.-The-Joker story in 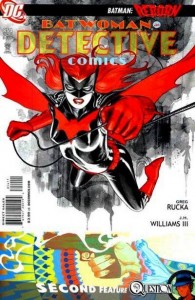 elegy for Batman (he having been “killed” in Final Crisis) that would have been well-accepted by fans if it hadn’t been accompanied by quite so much hype.

That can all be forgiven, though, because Detective #854 is the debut of Greg Rucka and J.H. Williams III’s “Batwoman” — the first time since the 1930s that Detective didn’t have a Batman story appearing in it — and it proves to be a dream collaboration: Rucka’s tight plotting and careful characterization combine with Williams’s lush drawing and daring layouts to create a great comic. It only lasts for seven issues — Williams is gone after #860, and by #864 Rucka is also gone and Batman is back — but it’s a lot of fun while it lasts. 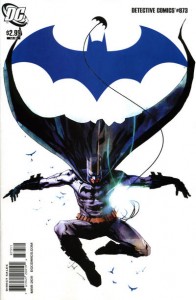 The remainder of the first volume of Detective has David Hine as writer at first, with Jeremy Haun as artist in #s 864-865, and Scott McDaniel in #s 867-870; Scott Snyder then comes in as writer with issue #871, mostly with Mark Simpson (signing his word as “Jock”) as artist, and they bring the book to a satisfying conclusion: a plot involving James Gordon’s son (and Barbara’s brother) is creepy and well-written (and earned Snyder a bat-writing slot in the relaunched new-52 Batman), while Simpson’s cover for #880, the penultimate issue, features a Joker head dissolving into bats and showed up on most lists of the best covers of 2011. Not a bad ending for such a long-running book, and a suitable place to stop for us, too.

With 40 years of experience in comic reading, collecting and reviewing, English Professor Phil Mateer has an encyclopedic mind for comics. Feel free to ask Phil about storylines, characters, artists or for that matter, any comic book trivia. He will post your questions and answers on the AABC blog. His knowledge is unparalleled! He is also our warehouse manager, so if you are looking for that hard to find comic book, ask Phil!
View all posts by Phil →
This entry was posted in Comics History, DC, News & Promos, Reviews and tagged Batman, Batwoman, Detective Comics, Ed Brubaker, Greg Rucka, J.H. Williams III, Paul Dini, Scott Snyder. Bookmark the permalink.