Actually, the list of creators for this book pretty much is the review: for $8, you get ten eight-page stories, including a new Beasts of Burden with the usual lush, expressive art by Jill Thompson, and a script from Evan Dorkin that’s a perfect blend of gentle humor and, at the end, stark horror (who knew that sheep could provide both?). Other stories include a new B.P.R.D. dealing with the aftermath over the death of Hellboy, chapters of Neal Adams’ and Howard Chaykin’s ongoing serials, the first installment of The Massive, Brian Wood’s new near-future dystopian tale, a Tarzan story with art by Thomas Yeates, and four other goodies. This isn’t just the best anthology out there right now (since the competition for the title is slim), but one of the best ongoing comics, period. 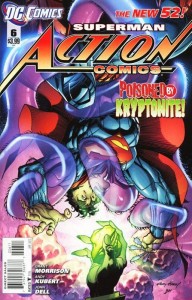 At first glance, this looked confusing, and a tad disappointing (what’s happened to the original young-Superman story? How’s the reader supposed to keep all the moving parts of the plot straight?) On actual reading, though, it turns out fine — it combines a Superboy-meets-the-LSH retelling with a plot about older versions of the characters dealing with a much later crisis, and it juggles past, present and future with aplomb, concluding with a heroic flourish that leaves readers both satisfied and eager to pick up the original storyline again. It and the back-up tale also establish that neither Ma nor Pa Kent survive to Clark Kent’s adulthood, a welcome-but-sad return to ’60s continuity that helps to explain both the young-adult Clark’s loneliness and his fierce defense of the common people against all bullies, bad guys and corrupt organizations a 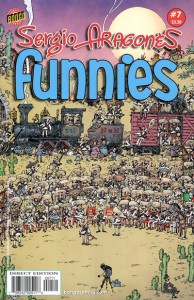 populist stance that’s been one of the most refreshing things about this book.

Mark Evanier’s blog this week noted that Aragones has been suffering back problems, and may have to stop drawing for a while.That’s a shame, since this book continues to be much more autobiographical than his others, but just as funny and awesomely-detailed; Aragones is one of comics’ best draftsmen, a talent sometimes obscured by his cartoony approach. It’s one of those rare books that’s truly all-ages —  accessible to everyone, with something to delight any reader, and an

The second of a fun and suspenseful two-parter, wherein Spidey has to prevent a near-future apocalypse, but isn’t sure how. Very nicely plotted, and the two issues together are a good example of the pleasures in the book’s current incarnation: the fast pace, the intriguing supporting cast, the smooth art; if you haven’t read the title post-Mephisto, 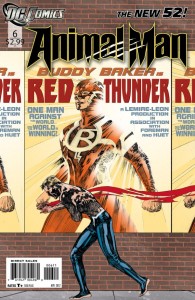 these are an encouraging place to start.

An… unusual story, one which doesn’t move the book’s overall plot forward much, but which deepens our knowledge of Buddy. Saying any more would spoil the story’s surprises, but it’s a cool idea (it reminds me of Gilbert Hernandez’s stories that feature movies wherein his characters are actors), expertly done; it gives Leon a chance to show off his art, while the book’s regular team gets a few pages too, and Lemire continues to impress. 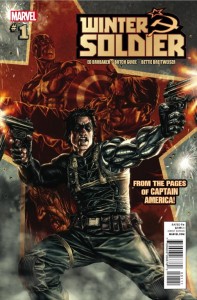 If you’ve been enjoying the Brubaker/Guice team on Captain America the last few years, then here you go: the same team, the same kinds of stories, and the same casual secret-agent repartee between the former Bucky Barnes and Natasha “Black Widow” Romanov, complete with surprise old-school super-villain (a Russian, too) at the end (no spoilers here, except to say that this time he isn’t 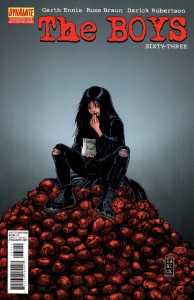 Events continue to accelerate as the ending looms in a few issues. Ennis is a careful planner, and it’s fun to watch as earlier-planted plot seeds bloom, and Bad Things happen to people (there’s a weird parallel structure, as two characters, one on each side, literally lose their heads), with many more to come. This is no place to be picking up this title for the first time, but the trades and original issues are available, and this has been Ennis’s main labor of love for the last five years, so the whole story is highly recommended.

The end of the first storyline — very pretty-looking, as you’d expect from the Dodsons, and quirky/poetic in event and character, as you’d expect from Fraction (his something-of-a-con-artist take on Dr. Strange is an interesting approach). Pick up the first arc while all the issues are still on the stands, before it becomes a hard-to-find cult classic (and watch in a few weeks, as previous versions of The Defenders show up on the discount racks — my current project….). 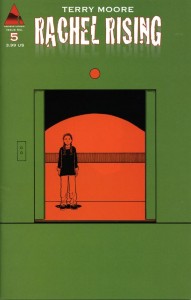 Moore’s little girl isn’t the main character of this book, but she’s one of the most memorable (having a murderous invisible-friend partner will do that). The prospective foster-parent bad guy is too conveniently evil to help the book’s credibility, but his imaginative demise (a specialty with this title so far) makes up for it — and the art, as always, is a delight.

With 40 years of experience in comic reading, collecting and reviewing, English Professor Phil Mateer has an encyclopedic mind for comics. Feel free to ask Phil about storylines, characters, artists or for that matter, any comic book trivia. He will post your questions and answers on the AABC blog. His knowledge is unparalleled! He is also our warehouse manager, so if you are looking for that hard to find comic book, ask Phil!
View all posts by Phil →
This entry was posted in New Comics, Reviews and tagged Action Comics, Animal Man, Beasts of Burden, Dark Horse Presents, Garth Ennis, grant Morrison, Jill Thompson, Rachel Rising, Sergio Aragones, Spider-man, Superman, The Boys, The Defenders, Winter Soldier. Bookmark the permalink.