The Week in Review by Dan!

I’m the kind of guy that checks out all kinds of comic-related internet websites and reads all the news. Through the week, if you follow our facebook you’ll see important comic news updated. This blog post (which I will post often) will be a quick review of the hits along with my traditionally snarky viewpoints.

The original post is HERE but c’mon, how have you not heard about this now? DC has decided to take the dive and create a series of prequels based around what is perhaps their most famous actual literary work. Is that a gutsy play? Of course, but I believe that it’s been crafted about as perfectly as humanly possible. 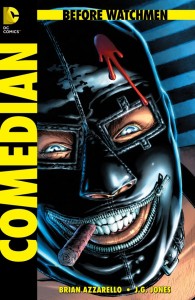 But really, read the articles, look at those teams and tell me there isn’t ONE book there that you want to read. I alone can guarantee I’m getting the Darwyn Cooke Minutemen series, and the Azzarello-Jones Comedian series. In addition, I’m gunna take a look at Wein-Lee on Ozymandias and Cooke-Conner on Silk Spectre. There isn’t a single person out there who isn’t gunna drool over one of these books.

Holy moly those are strong teams. I’m not a Straczynski fan at all, but I know for a fact that there’s a ton of you that will pick this up for his name alone. Joe Kubert is around inking his kid for a story. Adam Hughes is doing interiors. REPEAT: ADAM HUGHES IS DOING INTERIORS. The teams on these books are fantastic.

Alan Moore doesn’t approve. That’s new… Oh wait, no it’s not. He never wants to be involved like this, and he’s been talking about recycling ideas of his since about the time I’ve been reading comics. While he and Dave Gibbons did get screwed in their contracts, there’s plenty of us that are jonesing for more. I think this is a fantastic way to encourage new readers who’ve only read Watchmen to come back and try more.

#2! Neil Gaiman and Todd McFarlane Settle Their Dispute, We Think… 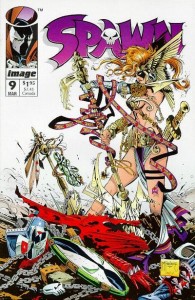 The Associated Press broke the news HERE, but I’ll try to put it simply. McFarlane used plenty of writers in the early days of Spawn. One of them was Neil Gaiman, who created the characters of Dark Ages Spawn, Tiffany and Domina. From there, McFarlane made his traditional action figures of all of these, and Gaiman flipped his lid.

Ironically, Image Comics was created to help creators get “freedom” over their creations, so this DECADE-long lawsuit didn’t really help them keep their image clean (Image’s image… hoo boy.)

Two things worth noting. This is technically the end, as the AP says more info about the ruling can’t be disclosed, but Gaiman’s attorney said McFarlane can’t appeal anymore. It sounds like everyone ended up happy, but McFarlane’s attorney was suspiciously absent from the article.

SECOND! Could this be the first step toward clarity about Miracleman? Alan Moore has backed off to go be angry about everything (that’s new), but McFarlane and Gaiman are still arguing over who actually has the rights to the 80s stories. Hopefully more info can come to light, and this will be the lighting of a candle that makes some of us who can’t afford a death issue the chance to read some of these “classic” issues.

#3! Shuffling Teams So Hard, You’d Think the New 52 was a card deck

Where to even begin on this one? Your best bet is to just go through the history on the DC blog HERE. 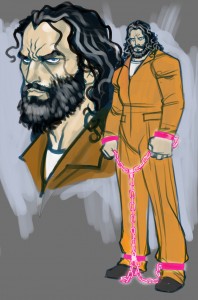 There’s a lot of shuffling going on at the New 52, and it started off so well. Paul Cornell is leaving Stormwatch, which is not new news. However, Peter Milligan (Hellblazer and Justice League Dark) is taking over those writing duties. He’s leaving Justice League Dark to Jeff Lemire (Animal Man, Sweet Tooth). Lemire is leaving Frankenstein, and indie creator Matt Kindt (Superspy, Revlover) is going to write his first ongoing mainstream series. That make sense? Cause it’s all good news. Changing teams is always unfortunate, but each of these is a solid takeover by a pro writer. I could not be happier.

On the “meh” side of things, Gregg Hurwitz (Penguin: Pride and Prejudice) is taking over the writing duties for Batman: The Dark Knight, and it’s not clear if David Finch is still co-writing. Also, Marcus To (Red Robin, Huntress) is going to be taking over the art on Batwing. I assume this is a problem with Ben Oliver not being able to maintain an ongoing, but that’s purely speculation. Also, after Dan Didio and Jerry Ordway finish their Challengers of the Unknown story for DC Universe Presents, Jerry Robinson (Starman) and Bernard Chang (who drew the Deadman story earlier in DCUP) will start a new story with a brand new character. It will be Vandal Savage’s daughter, but apparently not Scandal Savage.

And finally. Rob Liefeld. The teams have finally been announced for the three (My God, Three) books that he’s involved in. We already knew that Deathstroke was all his. He’s writing and drawing, so if you liked Hawk and Dove (cancelled) there ya go. He’s plotting Savage Hawkman, which will be scripted by Mark Poulton (no clue) and drawn by Joe Bennett (a lot of DC stuff). That one will go from the “meh” team of Daniel and Tan to the new meh team. However, the straw that breaks the camel’s back is Grifter. Scott Clark stays on as the artist, which is fine, but Scripting the book will be the one the only… Frank Tieri. I’ll wait for this to actually come out, but I think we all know how the Professor feels about Tieri (there’s not a link, but it’s not good). Liefeld getting his hands in everything is just unfortunate to say the least.

Every single one of these changes start at issue #9 which isn’t until May (which feels like forever away, but just you wait). It’s intriguing to see the shuffling, and I’m sure we’ll see more every month.

Quick Hits! Other Important Stories from the Week:

Mark Waid is ending both Irredeemable and Incorruptible. That’s a bummer, but it had an incredible run.

Archie might be having an interracial baby. Whoa! Progressive!

You bored? Here’s some quick things to look at to entertain you:

This girl is Zatanna. You’re welcome.

By the time this posts, The Avengers trailer will have aired, but it’s being hyped already. Enjoy!

There’s a new Ultimate Spider-Man thing set to happen. They’re trying to hype it, but it hasn’t become a big deal.

And that’s the Week in Review. This new feature is a work in progress, so feel free to leave some comments about anything you think might be important that I overlooked. Same time next week!