All About Alan’s Acquisitions 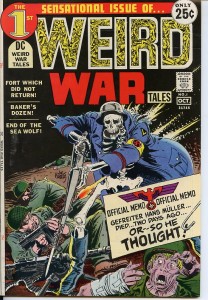 OK, so this is a very cumbersome sounding title. But we are “All About”, and my name is Alan, and I “acquire” new collectibles for the store! And besides, I like alliteration! I thought I should get back to periodic postings to let AABC’s great customers know what kind of new items I’ve been purchasing for the store. I’ve had a plethora of great stuff coming in lately, but the collection I’d like to discuss now is the one currently on display on the table towards the west end of the store with the red table cloth. Lots and lots of high end condition books here you guys, and what really appeals to me,  some very esoteric titles!

There’s a slew of late 1950’s DC Western titles, including All-Star Western and Tomahawk. Marvel westerns are featured too with titles like Kid Colt, which always had that great Stan Lee/Jack Kirby flair. And one book I found with a pretty audacious name from the early 1950’s, “Western Killers!” Ya gotta love it! Harvey publishing is well represented here, with VF 8.0 copies of “Casper, the Friendly Ghost” Giants. Very tough to find books like this in high end shape.

The Science Fiction/Horror motif from the 1950’s/60’s is included here too. House of Mystery, Strange Adventures, and Mystery in Space are just some of the titles, many at very affordable prices too. Obscurities like Dell’s “Tales from the Tomb”, along with an ACG title I’ve NEVER seen filter in before, “Magic Agent” are here. I just had to read a few of these puppies before pricing them! This aforementioned title is a character that’s sort of a combination of James Bond and Marvel’s Dr. Strange. Goofy but yet cool stuff from the early 1960’s.

The last title that really stands out in my mind is the beautiful selection of DC’s early 1970’s war book, “Weird War Tales.” Always requested by in-store and web customers, but rarely found in the NM 9.4 shape we got them in, this title is just the gem of this 1,600 or so comic collection. There were TWO VF/NM copies of issue #1, and one of them has already been purchased, so don’t wait if you have any interest in this one.

Did I mention the assorted Golden Age (1940’s) books that were part of this collection? No? Then please come in and have a look-see at the display case that features them. Police Comics, Captain Marvel….even a hard-to-find early 1950’s horror EC!

It’s been nice “talking” with all of you again….and as the old Silver Age DC letter columns used to end, “We must be doing something-Write!” (As in respond to these missives you guys!)

Alan Giroux, co-owner and founder of AABC is the heart and soul of All About Books and Comics! Alan is the master of acquiring our massive back issue inventory (over one million comics in stock). With 40 years of comic retailing Alan's expertise in back issue comics is unmatched. Alan handles all eBay sales. Got something to sell? Contact Alan!
View all posts by Alan →
This entry was posted in DC, Marvel, News and Events, Retailing, Silver Age and tagged ACG, Bronze Age, Dell, Gold Key, Golden Age, Harvey, Silver Age, Weird War Tales, Western Killers. Bookmark the permalink.