It Came From the Back Room #30 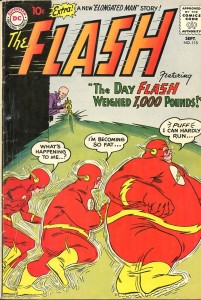 Standard recap: I’m slowly going through AABC’s one-million-plus back-issue room, restocking the boxes on the sales floor and pulling stuff to sell as discount/overstock/special items. I’m going through the alphabet backwards (don’t ask), and at my speed, this amounts to a two-year project.

Something different this week: I’m working on the letter “F” now — specifically, back issues of Flash — but I’ll cover the discount stuff from that in my next posting, once it’s all finished and available on the cover price racks. Instead, since it turned out that we had so many cool (and key) Silver Age issues of the Scarlet Speedster available, they’re now out in the display case back where I work, on the far west side of the store. As a special treat for Flash fanatics, that case also includes three pages of original Flash art from my collection (no, the art isn’t for sale, but what’s the point of having cool original comics pages if you can’t share them?). Let’s look at what’s out there: 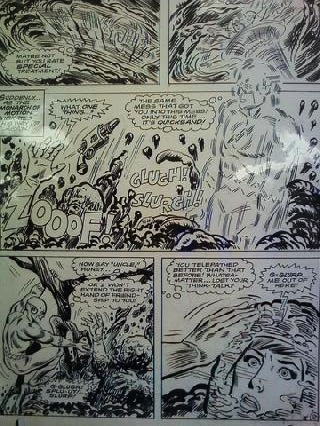 The Andru/Esposito team was together for decades: they worked on titles like Wonder Woman and Metal Men for DC in the ’60s, and ended up on a long, fondly-remembered run of Amazing Spider-Man in the ’70s. This page is from their late-’60s stint on Flash (issues #175-194), and is a good example of their dynamic layout and ability to show speed (something that not all Flash artists, sadly, have been able to do, although the gold standard remains original Flash artist Carmine Infantino). This is also a good example of what a great source of original comics art ebay was about ten years ago: I only paid $50 for it, even though it’s from the Silver Age, and has Flash in costume — doing speed stunts — in every panel. *sigh*  Try doing that today; it’d cost five to ten times as much. Ah, the good old days…. 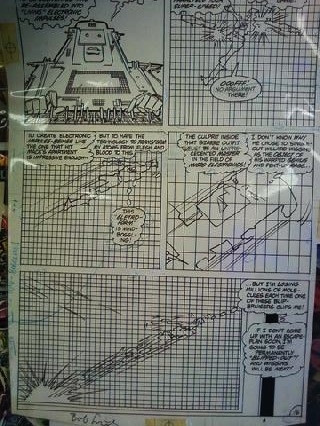 Speaking of Infantino, the Silver/Bronze Age artist most associated with the Flash… this is a page from late in his career. It’s written by another Bronze Age Flash mainstay, Cary Bates, and involves Barry Allen’s costumed altar ego getting sucked into a video game by the villain “Colonel Computron.” Of course, it’s 1981, so there aren’t any 3-D graphics or even Tron-like effects; instead, it’s old-school Atari 2600-styled pixels at their finest. This makes it part of the grand tradition of absurd Flash transformations (the Fat Flash at the top of this article, the Puppet Flash, the Glass Mirror Flash, the Big-Head Flash… Barry’s elastic molecules went through more transformations than Jimmy “Giant Turtle Man” Olsen), and the classic Bates science-speak makes it even more fun as Barry tries desperately to think his way out of the trap. 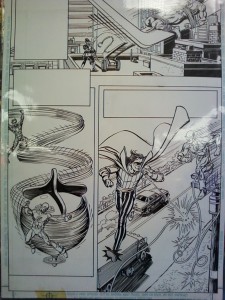 This was from a hardcover graphic novel, purportedly telling the biography of the Flash as written by “Iris Allen,” but it was actually by Mark Waid and Brian Augustyn, with art by Gil Kane, Joe Staton, and others. As you can see, it’s more pictures separated by blocks of text than a regular comics page with dialogue, and is from a summary of some of the cases (and key Rogue’s Gallery members) from early in Barry’s career: the Kane/Palmer team recreate the covers of Flash #121 (the Trickster panel) and 124 (The Captain Boomerang), plus an interior splash from an adventure against the Human Top. Let me say that again: this page is by Gil Kane and Tom Palmer, and recreates three classic Flash encounters (you really need to click on the image, and admire it in its larger version — or, better, yet, look at the original in the store). This was one of the first pages I got when I started collecting seriously: AABC’s late, lamented Dave Brown, an art collector himself, was going to the San Diego Comicon in 2000, and talked me into letting him find me a few pages (this was before I discovered ebay). I gave him $200 and said “get me at least two cool pieces of art,” and he returned with this and a Gene Colan Daredevil page; I thought he’d accomplished his mission adroitly, and I was both delighted and hooked.

Besides the art, we’ve got a number of key Flash books in the display case — and they are for sale; in addition I’ve restocked the Silver/Bronze Age boxes and regular back issue boxes with issues from that, er, run of the character, so there are a lot of books available, in a number of different price ranges. The case includes copies of Flash 107 ($140) and 109 ($150), from 1959, and numbers 111 ($100), 115 ($75) and 116 ($85) from 1960 (you can click on the issue number and price here to see a closeup of the actual book).  Other significant issues on display include #137 ($100), one of the early team-ups with the Golden Age Flash, from 1963, and #175 ($100), featuring the second Flash/Superman race in 1967 (after you click on the link to this one and get to the sales page, click on the cover itself to get a much larger version, just to admire it;  it’s a VF- copy). Finally, if you’d just like to read and have fun with the early adventures of the Flash, the first two volumes of DC’s Showcase reprint series are available on top of the same case: over 500 pages of black-and-white Silver Age goodness, covering more than 20 issues each, for less than $20.  Barry Allen’s intimately connected with the Silver Age, as the first revived and rebooted Golden Age hero, in 1956; as DC prepares for another revival, this is the perfect opportunity to check out his past.

With 40 years of experience in comic reading, collecting and reviewing, English Professor Phil Mateer has an encyclopedic mind for comics. Feel free to ask Phil about storylines, characters, artists or for that matter, any comic book trivia. He will post your questions and answers on the AABC blog. His knowledge is unparalleled! He is also our warehouse manager, so if you are looking for that hard to find comic book, ask Phil!
View all posts by Phil →
This entry was posted in DC, News & Promos, News and Events, Silver Age and tagged Carmine Infantino, Flash, Gil Kane, original art, Ross Andru, Silver Age. Bookmark the permalink.

One Response to It Came From the Back Room #30