This being the middle of five chapters, it’s the appropriate time for our lead character to regain his powers (by doing the exact same thing he did in the previous issue, only adding more… cowbell, or something), and try to get the JLA band back together — although, as it turns out, some of the members are in better shape than others. As a main event, this comic has been a lot more focused than Marvel’s Fear Itself — it’s shorter, and the problem (undo the villain’s machinations, and get things back to normal) is a lot easier to grasp. Johns continues to add a couple of surprising twists in each issue, and Kubert’s art is as solid 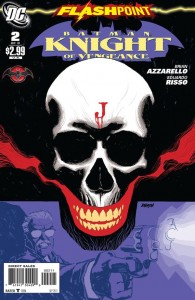 as any fan would want; his reimagined Superman, especially, is both startling and logical, given the story’s circumstances. For a summer crossover event, this is well-constructed,, snappy and fun enough to make the grade.

Three Flashpoint crossovers, and they’re all decent (another advantage DC’s been showing over Marvel, whose Fear Itself tie-ins have been curiously half-hearted, lacking in any urgency or must-have connection to the main event). Batman continues to be the stand-out, because the Azzarello/Risso team is so polished and fun to watch; the Joker here is suitably nasty and over-the-top, and of course since there’s a reset button looming there’s no compunction about any of the good guys getting killed or seriously maimed (psychologically, if not physically); in addition, the last-page revelation is guaranteed to bring readers back for the final issue next month. Secret Seven gets more bogged down in plot details than the premiere 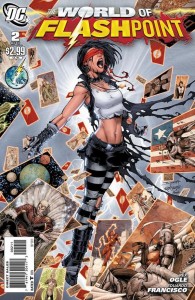 issue, but it’s still a Peter Milligan Shade story at heart, and that’s enough to make it worth reading. It isn’t exactly hurt by the art, but it isn’t helped either; there’s nothing startling or pretty enough there to ramp up the energy level. Similarly, World of Flashpoint benefits from being a Terry Thirteen story, but most of the book involves her zapping around the world being ineffective and engaging in plot info-dumping (true to the series title, I suppose); other than the character itself, there isn’t anything especially compelling about the art or the circumstances. 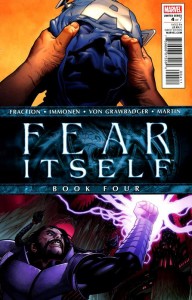 As I said up above, this crossover event has suffered in comparison to its rival’s; it, too, is at a halfway point with this issue, and it too has a “getting the band back together” moment, and, finally, a little more revelation about the big bad guy. It’s at least beginning to come together;  Fraction’s scripting has a few moments, mostly with his own characters, Thor and Tony Stark (there are a few with Steve Rogers, too, but they seem forced, and a scene with him parachuting down into Manhattan, machine gun blazing, seems solely designed to connect up with imagery from the Cap movie), but they don’t have quite the sizzle of Johns’s; similarly, the art, although serviceable, doesn’t deliver as much energy as Kubert’s. If you’re keeping score at home, the verdict is: readable, but lagging a few steps 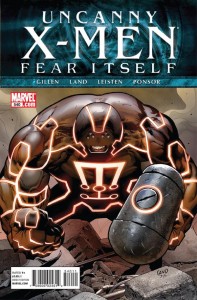 behind Flashpoint, both in artistry and in sheer popcorn readability.

Fear Itself reaches the X-Men, in the form of the Juggernaut — but not quite, since he doesn’t actually get to them in this issue; as he approaches, ever so slowly, we’re left with Gillen’s skill at characterization and dialogue to tide us over. It’s fortunate that he’s good at that sort of thing, since nothing much actually happens otherwise. OK but incomplete; we’ll have to see how the rest of the story

plays out in the next few issues.

Jonah tracks an old prospector who’s finally hit it big, but run afoul of claim-jumpers; he turns out to have a past connection to our scar-faced, ex-Confederate bounty hunter, one that increases the weight of the story considerably. The other attraction is the Jeff Lemire art, so fans of Sweet Tooth should pick this up, too. Here’s hoping that the Jonah reboot in September (where he ends up in the late-1800s version of Gotham City) won’t knock this finely-crafted, high-quality book off its game. 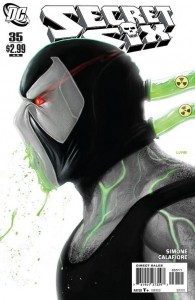 Only one issue left after this one; it reads, frankly, like Simone found out maybe two months ago that she was going to have to end it, since here Bane decides, on the spur of the moment and not particularly in character, that the Six should take on Batman and all his associates. That’s not, obviously, going to turn out well, but it does give us the chance to watch her work her magic with the group’s characterization, especially its signature cynicism and bleak-but-engaging sense of humor. Why a solidly-selling, quirky title with a firm fan base like this isn’t one of the 52 books being offered in September is a good question, but at least the ending promises to be a suitably apocalyptic, scorched-earth payoff.

Shooter continues to be very good at exploring characters with universe-altering powers (his Molecule Man was the best thing about his Avengers and Secret Wars runs), with a canny combination of science and psychology driving his plots and people. It’s too bad this family of ex-Gold Key/ex-Valiant/ex-Acclaim titles hasn’t caught on; they’re a good match for most other books on the stands right now, both in storytelling and visual quality, and Shooter deserves a regular place to spin his tales.

Stuff I liked enough to buy, but don’t have anything new top say about, so read previous reviews in the archives if you’re interested:

Hey, as you may have noticed, this is an anniversary post — #200 for “Stuff  I Bought,” although with the earlier “Stuff I Put Back” and the current “It Came From the Back Room” posts, the total’s actually at about 420 right now. Anyway, just for old time’s sake, here’s a link to the earliest “Stuff I Bought” in the archives — not #1 (that disappeared under mysterious circumstances involving a spam attack quite a while ago) but #2, from January 12, 2007 (so, yes, it’s been over four and a half years of posts this week).

With 40 years of experience in comic reading, collecting and reviewing, English Professor Phil Mateer has an encyclopedic mind for comics. Feel free to ask Phil about storylines, characters, artists or for that matter, any comic book trivia. He will post your questions and answers on the AABC blog. His knowledge is unparalleled! He is also our warehouse manager, so if you are looking for that hard to find comic book, ask Phil!
View all posts by Phil →
This entry was posted in New Comics, Reviews and tagged Adam Kubert, Batman, Doctor Solar, Fear Itself, Flashpoint, Gail Simone, Geoff Johns, Jeff Lemire, Jim Shooter, Jonah Hex, Matt Fraction, Secret Six, X-men. Bookmark the permalink.