It Came From the Back Room #26 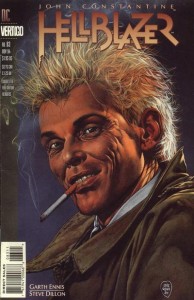 Standard recap: I’m slowly going through AABC’s one-million-plus back-issue room, restocking the boxes on the sales floor and pulling stuff to sell as discount/overstock/special items. I’m going through the alphabet backwards (don’t ask), and at my speed, this amounts to a two-year project. This week, we’re looking at a couple of DC bargains from the end of the letter “H,” and some indy titles from the beginning of the letter “G” :

Alan Moore’s occult trickster, who first appeared in Swamp Thing looking almost exactly like Sting (the Police lead singer of the early ’80s, not the easy-listening jazz purveyor that he later morphed into) has had a long and fortunate life as a comics 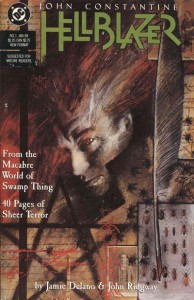 character, with his own title lasting well over 20 years and a number of excellent creators — most of them, like John Constantine himself, hailing from the British Isles — providing his stories. Jamie Delano provided the scripts for the first few years of the comic, with John Ridgeway handling the art for the first nine issues, and then a number of others contributing — most notably current Fables artist Mark Buckingham on issues #18 – 22. There’s a Grant Morrison/David Lloyd tale in issues #25 and 26, and a Neil Gaiman/Dave McKean one in issue #27 that’s very hard to find (it’s one of the few issues we’re completely out of); Sean Phillips, of Marvel Zombies and Criminal fame, provides pencils in issues #32 and 34-36. 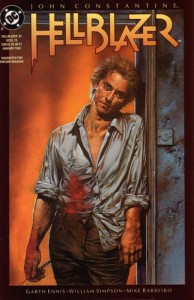 After Delano leaves with issue #40, Garth Ennis takes over the writing chores with #41, beginning a long and wonderful run that begins with a bang: Constantine, who’s always had a cigarette in his hand, discovers that he has lung cancer; what’s worse, he’s managed to piss off the Devil, who’s licking his lips at the prospect of his adversary’s death and subsequent appearance in hell. Will Simpson provides the art for the six-issue arc, which is resolved in classic Constantine fashion, and the title is off and running as a fan and critical favorite.  The quality goes up even more with issue #57, when Steve Dillon takes over the art chores (after guesting in #49): fans of the Ennis/Dillon Punisher books should check out the creative team’s first long collaboration here, which continues through issue # 83. There’ve been other memorable creative teams on the title since — Paul Jenkins and Sean Phillips in the next few years after Ennis and Dillon left, through 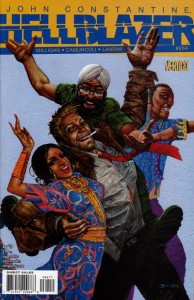 issue #120 or so; Ennis and John Higgins from #129-133; Warren Ellis and Higgins from #134-139, with Ellis continuing as writer through #143; Brian Azzarello and Richard Corben (!) on a five-parter featuring Constantine doing hard time in an American prison, in issues #146-150.  Azzarello continues as writer for a few years after that, including a story with Guy Davis in #s 162-163, and ends his run as scripter with #174; Mike Carey takes over after that, all the way through issue #215. The current writer, Peter Milligan, has been around for a little over two years, starting with issue #251; he began mostly with Guiseppe Camuncoli (most known to superhero fans for his work on Dark Wolverine) on art, but noted British penciller Simon Bisley has appeared quite a bit lately, too. Throughout, this title has been a quirky occult/horror pleasure, set off in its own little corner; whether bringing Constantine into the main DC Universe in September will give him a wider audience, or kill him with overexposure and mediocre writing, remains to be seen. 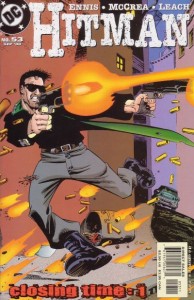 This is another Ennis DC title, more in the over-the-top vein of The Boys than Hellblazer was, about an assassin-with-a-conscience and his wide assortment of quirky (to put it politely) friends, enemies and lovers, and it’s worth a look: John McCrea, who’s done a number of Boys issues, provides the art for the whole run, and it’s by turns a sly sendup of superheroes, a meditation on violence and war, and a stirring story of friendship and loss. Not a lot of these are available on the cover-price rack, but if you’ve never read the title before (especially if you’re an Ennis fan) go pick a few up, and see if you aren’t hooked. 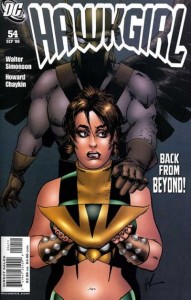 This is the last of the DC “H” titles, and it’s both the most recent and the most underappreciated: it took over the numbering on the older Hawkman title as part of DC’s “One Year After” promotion following the 52 mini-series. It features Walt Simonson on the writing for all the issues (#s 50-66), and Howard Chaykin on the art (from issues #50-56); the Simonson/Chaykin team-up, especially, is a very high-quality dose of stylish adventure.

Now we move to the indy “G” titles. This is part of the first wave of non-Marvel or DC books that remade the industry in the mid-’80s, riding on the coattails of the success of Teenage Mutant Ninja Turtles. Created and written by Matt Wagner, it started out as the story of an anti-Batman, Hunter Rose, a rich guy who dons a costume to promote his criminal enterprises instead of stop them (yes, kids, Mark Millar wasn’t the first writer to think of that idea); when this series begins, Rose has already died, but Christine Spar, a woman whose mother was connected to him, puts on his costume with the best of intentions — to battle a vampire who’s kidnapped her child — but is eventually corrupted by the Grendel persona. The art for this arc, issues #1-12, is by Arnold and Jacxob Pander, and is stylish, cutting-edge and startlingly modern-looking, even today, 25 years later. The Grendel persona’s lasting, and powerful, influence over the 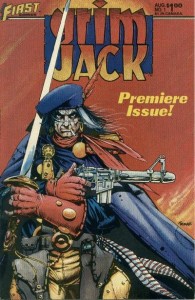 years becomes a theme of the book, through 40 issues of the comic, a 10-issue mini-series (War Child), and a number of books since. If you’ve never read any of these before, those first 12 issues, especially, are a great place to start, and at their original price of $1.50 each they’re a bargain.

Another ’80s indy mainstay, and another underappreciated bargain waiting to be discovered. Grimjack, John Gaunt, is a detective/mercenary who operates out of Munden’s Bar, a sleazy watering hole in the interdimensional crossroads 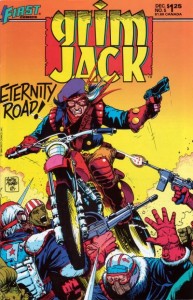 city of Cynosure that looks like the Star Wars cantina scene come to life. Writer John Ostrander (maybe best known for his DC work on Suicide Squad and Spectre) crosses the hard-boiled and science-fictional elements with grace and weary, cynical skill, and co-creator and artist Tim Truman’s gritty, solid and imaginative art complements it perfectly. Ostrander’s the writer through the series’s entire 81-issue run, but it’s the first 18 issues, with the Truman art, that have the most oomph. Later, Tom Mandrake (who also teamed with Ostrander on The Spectre), comes on board for issues #31-54, and that’s the second-best run to consider. As with Grendel, these are entertaining, ground-breaking comics that, at $1 – $2 each, are well worth seeking out. 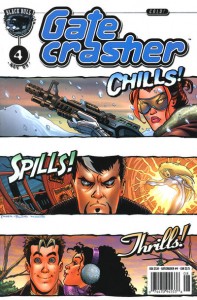 This is a science fiction tale in the Starship Troopers/alien invasion vein, but look at the creators: Mark Waid and Jimmy Palmiotti on story, Amanda Connor on pencils, and Palmiotti on inks. It was published by Black Bull, the short-lived Wizard magazine comic imprint, and only managed two mini-series, of six and four issues, but they’re high-quality, rollicking adventure fun, and yet another little-known pleasure.

With 40 years of experience in comic reading, collecting and reviewing, English Professor Phil Mateer has an encyclopedic mind for comics. Feel free to ask Phil about storylines, characters, artists or for that matter, any comic book trivia. He will post your questions and answers on the AABC blog. His knowledge is unparalleled! He is also our warehouse manager, so if you are looking for that hard to find comic book, ask Phil!
View all posts by Phil →
This entry was posted in Comics History, News & Promos and tagged Garth Ennis, Gatecrasher, Grendel, Grimjack, Hawkgirl, Hellblazer, Hitman, Howard Chaykin, John McCrea, Matt Wagner, Steve Dillon, Tim Truman. Bookmark the permalink.