As the title implies, this is a comic about tennis — and, as hinted by the artist’s last name, it’s done in a very straight-ahead, clean manga style. Watson’s a dependably quirky and entertaining writer, very good at getting the small nooks and crannies of everyday life right, and this tale of a young female protagonist who’s good at tennis, but not good enough — and the rumpled coach who tries to help her — is a comfortably familiar story that’s capable of going off in unexpected directions. Everything about this package — the coloring, the art, the main character — is appealingly done, and at 45 pages for $4.99, it’s a good deal. Don’t let the lack of superheroes or the subject matter fool you — this is a well-crafted book, the best comic of the week.

Classic Spider-Man is when Our Hero is facing enormous odds, but is just too stubborn to give up; his compulsion to do the right thing overwhelms everything else. That’s what made the early years of this title so startlingly good, so it’s fitting that, with both of the original creators now back on board, its final arc draws deeply from that same well, as Peter Parker, shot and barely conscious, has to fight to save his friends and family (and vice versa) from a gang of murderous super-villains. Knowing that it’s all going to end badly makes it all even more poignant, although just how badly (and in what way) remains to be seen; a cliffhanger ending guarantees that readers will return to see how it all concludes next issue. 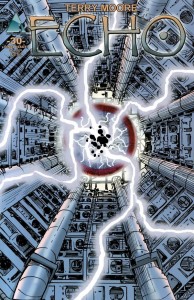 Speaking of conclusions: this is the last issue of this title, too, and it’s a suitably explody finale, with a couple of nice afterbeats in the coda. There might be a little too much attempt to get everything resolved and all the puzzle pieces snugly into place (although the just-right last panel leaves things more open-ended), but should play out well in trade form: overall, this has been a brainy, well-constructed action-adventure/sf series that’s well worth the readers’ time. 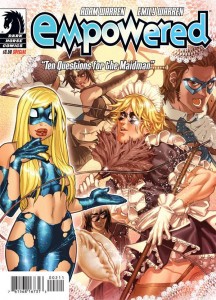 Another stand-alone-comic taste of the graphic-novel series (now up to seven volumes) about a superheroine with a spotty costume, image problems and the good luck to spring from the fertile mind of Adam Warren, whose talents at both art and high-tech-savvy, emotionally-astute storytelling make her adventures more fun to read than just about any other comic on the stands right now.

Thor having moved into his new eponymous comic, this retro-retitled book focuses on the young (very young, currently, as in “preteen”) Loki, who’s not a villain, but still very much the Trickster God; in this issue, he attempts to scam both Hel and Hell. Gillen’s firm grasp on character, and Braithwaite’s ability to convey emotion, do a good job of making us actually like the little scoundrel, and it’s a pleasure to follow his adventures right now.

Frankenstein and the Creatures of the Unknown #1 (of 3) — Writer: Jeff Lemire;  Art: Ibraim Roberson

Your four Flashpoint titles for the week, in 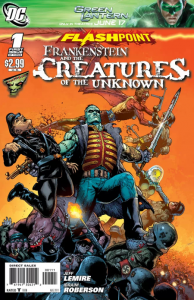 ascending order of readability: Deathstroke‘s the most mediocre, and the least attractive: who’d have though that casting Slade as a pirate would be so boring (it doesn’t help that the end of the first issue dovetails directly into a scene we’ve already observed in the main Flashpoint book, either)? Citizen Cold has Captain Cold as a super “hero” protecting Central City and the advantage of Kolins’s one vision, although it, too, is predictable (and the one of these books that feels most like a standard “Elseworlds” story). Aquaman is the most central of the three to the main Flashpoint saga, since it provides some backstory for how Arthur and Wonder Woman ended up mortal enemies whose fight has killed millions. The real winner in the batch, though, is Frankenstein, who’s paired with the old Creature Commandoes, and benefits greatly from Lemire’s fertile imagination and Roberson’s shadowy, solid art. 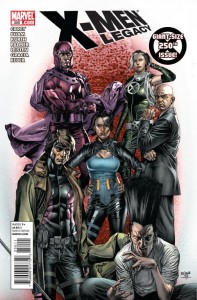 Giant anniversary issue. Although the main story (involving the new version of Legion and the search for some of his independent offshoot personalities) is the same size as it would normally be, there’s a second story to set up the next big plot (the search for Rachel, Havok and Polaris in the Sh’iar Empire) and a gratuitous reprint of New Mutants Vol. I #27, involving the first appearance of Legion and a reasonably cool Claremont/Sienkiewicz tale.

Stuff I bought but didn’t have much to say about, so look up past reviews in the archives if you want to know:

With 40 years of experience in comic reading, collecting and reviewing, English Professor Phil Mateer has an encyclopedic mind for comics. Feel free to ask Phil about storylines, characters, artists or for that matter, any comic book trivia. He will post your questions and answers on the AABC blog. His knowledge is unparalleled! He is also our warehouse manager, so if you are looking for that hard to find comic book, ask Phil!
View all posts by Phil →
This entry was posted in New Comics, Reviews and tagged 15 Love, Adam Warren, Andi Watson, Bendis, Echo, Empowered, Flashpoint, Jeff Lemire, Kieron Gillen, Loki, Spider-man, Terry Moore, X-men. Bookmark the permalink.