It Came From the Back Room #24

Standard recap: I’m slowly going through AABC’s one-million-plus back-issue room, restocking the boxes on the sales floor and pulling stuff to sell as discount/overstock/special items. I’m going through the alphabet backwards (don’t ask), and at my speed, this amounts to a two-year project. This week, we’re on the letter “H”: specifically, Marvel’s Green Goliath:

The Hulk, a Stan Lee/Jack Kirby riff on the Jekyll and Hyde archetype, is one of the 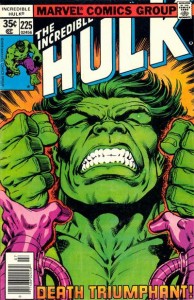 earliest Silver Age Marvel characters, first appearing in his own series in the May 1962-dated Hulk #1. In this earliest incarnation, Bruce Banner’s monstrous alter-ego is reasonably intelligent — he talks in complete sentences and everything — but mean. There’s a lot of flailing around to find a tone, and it apparently doesn’t work well with fans, because, despite Kirby art in the first five issues (and Steve Ditko in the sixth), that’s all there are; the series is cancelled after that, with the March 1963 book.

Banner doesn’t stay down for long, though — 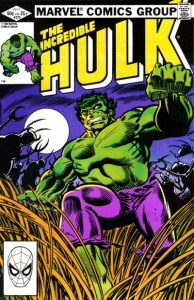 there are Hulk guest appearances in Spider-Man, Avengers and the Fantastic Four — and within a year and a half the Hulk has taken over half of Tales to Astonish, starting with issue #60. Now, the outlines of the “classic” Hulk are clear: Banner changes under stress, and his emerald counterpart is more tragic than mean, with much-more-childlike behavior, reduced intelligence, and a desire to be left alone. It’s still Lee and Ditko on these shorter stories at first, until Kirby comes back with issue #68, and stays until #83; after that, artists include John Buscema, Gil Kane and Marie Severin, until the Hulk, his popularity now established, takes over the entire book, and the title, with issue #102 in 1968. 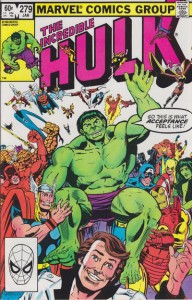 Severin stays on as penciller for the first few issues of this version, but the artist most associated with the late Silver/early-Bronze age Hulk — Herb Trimpe — comes on with issue #107 (and he’ll stay through #193), while Lee gives up scripting chores to Roy Thomas with #121. Other writers during this period include Archie Goodwin and Steve Englehart, although it’s Len Wein, arriving with issue #179, who’s probably most remembered, since he almost immediately introduces the character Wolverine in issue #181, in November 1974 — the key Bronze Age comic. 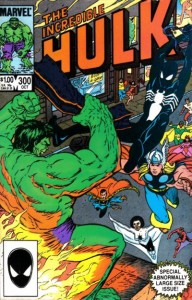 Wein stays through issue #222, while Sal Buscema takes over art chores from Trimpe with issue #194 and begins an even-longer run (he’s got the record for most issues drawn of the character, staying all the way to issue #309, almost ten years). Roger Stern becomes the new writer with issue #223, in 1978, and lasts through #243, in 1980. He’s replaced by Bill Mantlo, in issue #245, and the Mantlo-Buscema team begins a long, productive run that pretty much defines the ’80s incarnation of the Hulk. This is where we begin to have discount issues available, too (although more key issues are available here, here, here and here), and it’s a solid, well-remembered period in Greenskin’s history. 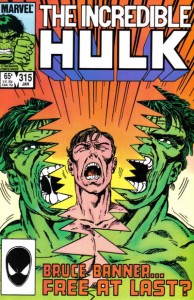 Mantlo and Buscema are both very good at nailing the Marvel house style for both scripting and art, with its mix of colorful villains, big fights, soap-opera subplots, humor and pathos, and both are crystal-clear storytellers and careful craftsmen. After a couple of years of this standard formula, they’re even confident enough to offer the first change in the character’s status quo since the early ’60s: the Hulk with Banner’s brain.

Oh, that had been done in single issues before, but had always reverted back to the normal “Hulk smash!” by the end of the story. In issue #271, though, the Hulk’s 20th anniversary

issue, he ends up on another planet and encounters Rocket Raccoon (don’t ask), who, in teleporting him back to Earth, bathes him in enough gamma rays to alter his body chemistry, and give Banner control. He stays that way for almost three years, earning acceptance in the Marvel universe and no longer having to hide as a monster, until the events in the Secret Wars mini-series (with an assist from the Dr. Strange bad-guy Nightmare) make him revert to a raging, mindless engine of destruction again, just in time for his 300th issue in late 1984; at that point the Doc, to protect Earth, exiles him to a “dimensional crossroads,” where he’ll spend the next year trying to find his way home. 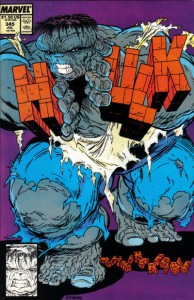 That year sees the departure of first Buscema (he’s replaced by, of all artists, Mike Mignola in issues #311-313) and then Mantlo, who cuts a creative deal with John Byrne: he’ll take over Byrne’s Alpha Flight book, while Byrne will bring his dual writer/artist abilities to the Hulk, starting with issue #314. The Byrne run is, typically, both high-quality and short: it ends with issue #319, due to “creative differences” (reportedly, Byrne had drawn a Hulk story with all splash pages, which led to a dust-up that caused him to leave the book; that story was eventually printed in Marvel Fanfare #29). Al Milgrom, longtime Hulk inker, takes over as both writer and artist for a few 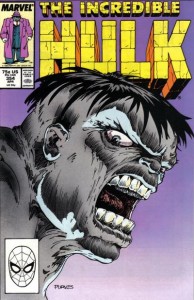 issues; his biggest contribution is in issue #324, where he reintroduces the grey, mean version of Banner’s monster for the first time since Hulk #1. Not much comes of that at first, but two other important changes occur soon after:  the introduction of artist Todd McFarlane with issue #330, and the introduction of Peter David as writer with #331. Their collaboration kicks off a critically-acclaimed run that’s relatively brief (McFarlane leaves with issue #345), but very satisfying: the grey-skinned Hulk under David is amoral, crafty and cranky, and McFarlane’s art is a leap forward from his previous work for DC’s Infinity, Inc.: detailed, electric and fun. The team creates buzz around the character, and kicks up 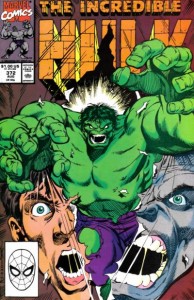 David, unlike McFarlane, will stick around for a while: he writes the title through issue #467, over 11 years (making him the premier Hulk scripter by far), and his tenure is marked by solid writing, with humor and drama mixed almost equally, and startling changes in the book’s status quo every few years. For example: after McFarlane leaves, the grey Hulk ends up as a casino enforcer in Las Vegas (calling himself “Joe Fixit”), a development that lasts a little over a year, and introduces the zaftig, appealingly-grounded escort, Marlo, to the 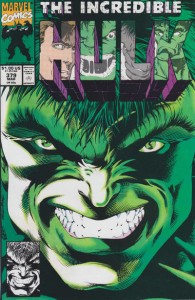 supporting cast; Jeff Perves supplies the art during this period. Issue #367 sees Dale Keown come aboard as artist; his run is marked by the return of the green Hulk in #372, and a reintegration of all of Banner’s gamma-powered alter egos into a new green Hulk with (mostly) Banner’s personality in #377. Issue #379 sees the introduction of the Pantheon, a group of immortals who try to help the world; they’ll stick around for years, with Banner eventually becoming their leader. Gary Frank takes over art chores with issue #403 (the David run, between McFarlane, Keown and Frank, is notable for the quality artists it features), and stays on the title through the end of the Pantheon storyline, in 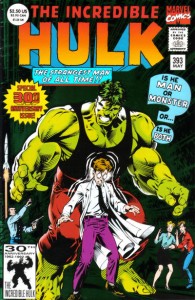 issue #425. Various artists then provide runs through the end of the David era with issue #467, including Liam Sharp, Angel Medina, Mike Deodato, Jr. and Adam Kubert; after David leaves, Joe Casey takes over, but the title only lasts another seven issues, to #474 (March, 1999). Don’t mourn for it, though — the next month sees the debut of Hulk Volume II, issue #1 — but this is a good place to end our discussion. As always, many of the issues discussed here (especially from #250 or so up) are available at 99 cents each — through issue #389 — and at cover price after that; they’re on the discount rack at the west end of the store, near the back cash register and near my workspace, so check them out over the next few weeks.

With 40 years of experience in comic reading, collecting and reviewing, English Professor Phil Mateer has an encyclopedic mind for comics. Feel free to ask Phil about storylines, characters, artists or for that matter, any comic book trivia. He will post your questions and answers on the AABC blog. His knowledge is unparalleled! He is also our warehouse manager, so if you are looking for that hard to find comic book, ask Phil!
View all posts by Phil →
This entry was posted in Marvel, Promotions, Reviews and tagged Bill Mantlo, Dale Keown, Gary Frank, Hulk, Jack Kirby, John Byrne, Peter David, Sal Buscema, Stan Lee, Todd McFarlane. Bookmark the permalink.