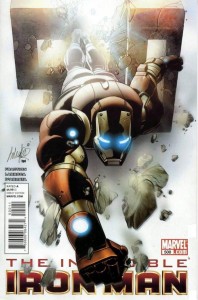 One of those start-the-original-numbering-over anniversary issues, complete with a five-page gallery of all 500 covers. Fraction proved with last year’s Iron Man Annual that’s he’s good at these big-event comics, and he doesn’t disappoint here, providing a 56-page story that guest-stars Spider-Man and roams from the present to the year 2052 (where the Mandarin, who was handled so well by Fraction in that annual, has taken over the world) and back; the varying time periods and character perspectives are done by different art teams, making it easy to track the narrative shifts, and Kano, especially, provides some gorgeous coloring in his sequences. At $4.99, only a dollar more than one of the 32-page regular issues, this is a great deal, and the best buy of the 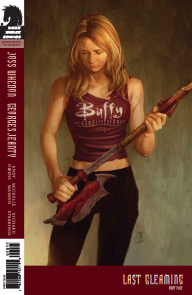 The end of Season Eight — more of an epilogue, really, since the big climax was last issue — and we get a new, much-lower-volume status quo for all of the characters, and a return to basics for the start of Season Nine later this year. Whedon  strikes just the right mix of angst and optimism, as always, seasoning the grief with humor and his obvious affection for the characters, and ending this run in fine style. 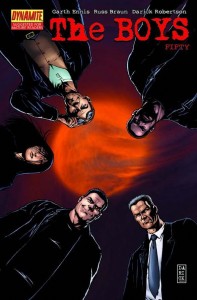 Another anniversary issue, although in a long-term limited series like this that doesn’t make a lot of difference; still, we’re given a trip to the past, and a look at what broke up the original Boys team and led to the current standoff between Vought-American and Our Heroes. More grim than usual, without any of Ennis’s usual gross-out humor to leaven the seriousness; this is effective as a chance to fill in some blanks in the past, underline just how bad the bad guys can be, take a deep breath, and get ready for the last third of the overall story.

Yet another “special issue” numbering milestone (and who’d ever have thought that this book, of all titles, would make it so far in a super-hero-oriented market?), and a good time to check in on its cast, as John Constantine gets married. This title has always done better with creative teams from the Old World (those Brian Azzarello/Richard Corben issues being the exception that proves the rule), and Peter Milligan has been using his penchant for offbeat psychosexual themes on it for a couple of years now, to good effect. No Simon Bisley this time — except for the cover — but Camuncoli is a suitable substitute, with his knack for offbeat caricatures and assorted nastiness (he seems a much better fit here than on Dark Wolverine), and there’s enough energy and interesting developments to 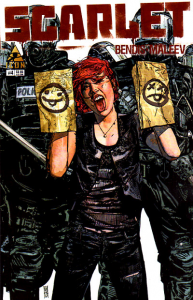 suggest that this book, despite its age, still has some life in it.

Not a lot of action in this issue, but it’s setting up for a bunch of it next time, as Scarlet appears in public, at a rally attended by both her supporters and the police. Bendis does a good job surrounding his title heroine with characters on all sides of the moral issues involved: good cops and bad cops, venal politicians and public servants, and citizens both sincere and phony. That, plus the talk-to-the-camera narratives, plus the solid, humanistic Maleev art, make this, as always, hard to resist. 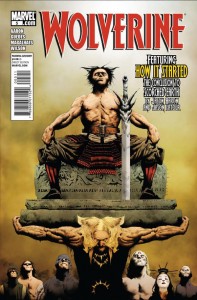 The end of the Wolverine-in-Hell arc (although, annoyingly, it moves right into the next arc at the end of the issue, with no time to rest or take a breath), and it’s… well, good enough to keep reading it, I suppose — I like the Aaron scripting, although the art is just so-so; Guedes reminds me of Leonil Yu, in that there’s a sketchiness to his art that sometimes works against it, especially when he’s trying to do big superhero-action set pieces, as here. Still, this manages to rise above the considerable number of mediocre Wolvie stories out there — faint praise for what’s now supposed to be the 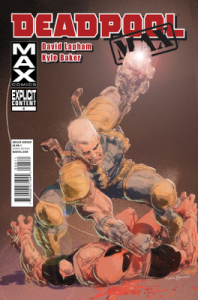 flagship title for the character, but enough to get my money.

Everything about this title is appealingly off-center: the Mad magazine movie-parody art, the scripting, the characters and its weird mix of sex, violence and tongue-in-cheek, deadpan humor. Only with a character like Deadpool could they get away with it, and even here I’m betting that a lot of potential readers, reared on standard superhero tropes and barely-funny character quips, put this back on the stands with a “WTF?” and move on. Not me; I could read these guys all day, and while I’ll be 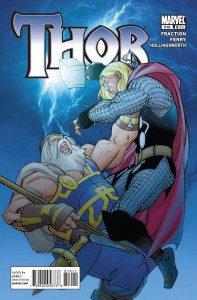 surprised if this manages to reach more than 15 issues, I’ll be grateful for every one.

Stuff I bought but don’t have much to say about, so look up previous reviews of the title in the archives if you want to know:

With 40 years of experience in comic reading, collecting and reviewing, English Professor Phil Mateer has an encyclopedic mind for comics. Feel free to ask Phil about storylines, characters, artists or for that matter, any comic book trivia. He will post your questions and answers on the AABC blog. His knowledge is unparalleled! He is also our warehouse manager, so if you are looking for that hard to find comic book, ask Phil!
View all posts by Phil →
This entry was posted in New Comics, Reviews and tagged Alex Maleev, Bendis, Buffy, Camuncoli, Deadpool, Garth Ennis, Hellblazer, Iron Man, Jason Aaron, Joss Whedon, Kyle Baker, Lapham, Mandarin, Matt Fraction, Peter Milligan, Scarlet, Simon Bisley, The Boys, Wolverine. Bookmark the permalink.