It Came From the Back Room #14 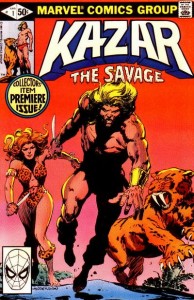 Standard recap: I’m slowly going through AABC’s one-million-plus back-issue room, restocking the boxes on the sales floor and pulling stuff to sell as discount/overstock/special items. I’m going through the alphabet backwards (don’t ask), and at my speed (even with school on holiday break right now), this amounts to a two-year project. This week, I’m on the letter “K,” and that means new old stuff from Marvel, DC and indy publishers out on the discount racks: 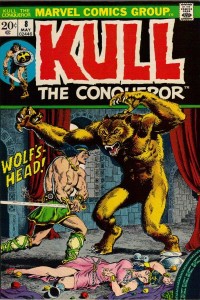 This is the Marvel series from the ’70s, featuring Robert E. Howard’s other memorable barbarian character, and, like Conan, it benefited from memorable artists: on issue #1, the team of Ross Andru and Wally Wood, and then the brother/sister team of John and Marie Severin for the next nine issues, followed by Mike Ploog for five issues after that. Later issues offer more pedestrian sword-and-sorcery work, by the likes of Ed Hannigan and Ernie Chan; however, the second series, the two-issue run from the early ’80s, elevates the visual quality again, with John Buscema on the first issue and John Bolton on the second. The third series, the ten-issue one from 1983 and 1984, is 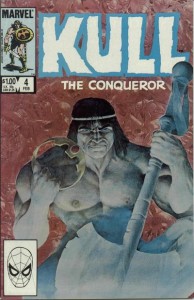 mostly Buscema again, with a few notable fill-ins: brother Sal does issue #8, while issue #4 features chapters from Vess, Bolton, Jackson Guice and Bill Sienkiewicz. Not a bad run of artists, all told — and the Severin and Ploog issues from the original  are all out in the regular boxes. Some scattered copies of those books are also on the discount racks, along with almost all of the later volumes, and at (mostly) just a buck each, they’re a cheap way to get your barbarian fantasy fix.

Ka-Zar started out as a minor Marvel Golden Age Tarzan 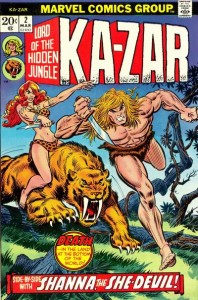 rip-off, and then showed up early in the Silver Age with X-Men #10,  getting a makeover, his saber-tooth tiger companion Zabu, and a new location — the Savage Land — to add dinosaurs to the jungle mix. His pulpy Burroughs-like origins made him perfect for the ’70s sword-and-sorcery revival that also spawned Kull, and his second volume (the first was a three-issue series of reprints) managed twenty issues from 1974 to 1977. Early issues are undistinguished — the first has art by Paul Reinman, and the next four are by Don Heck, who doesn’t exactly spring to mind when effective sword-and-sorcery artists are discussed; plus, his Tarzan-like pidgin English and habit of referring to himself in the third person (“Mighty is Ka-Zar! Lord of the Savage Land!”) 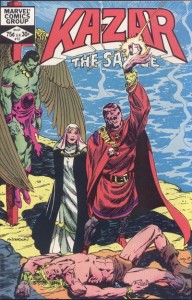 make him hard to warm up to. Still, there’s Shanna the She-Devil for eye candy, and the art perks up with issue #6, when John Buscema starts doing the layouts, with finishes supplied by people like Alfredo Alcala and Sonny Trinidad. Russ Heath does issue #12, while a pre-G.I. Joe Larry Hama does the art on issues #13 and 14, after which Val Mayerick takes over through the end of the run.

When the third volume begins, in 1981, Ka-Zar has changed considerably: he’s gained a sophisticated speech pattern, 50 or 60 IQ points, and the creative team of Bruce Jones and Brent Anderson, who make him, improbably, into a hit with fans — so much so that, with issue #10, Ka-Zar 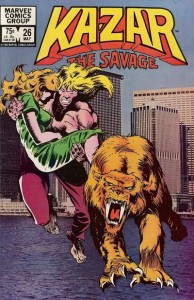 becomes one of Marvel’s first direct-market-only comics, along with Micronauts and Moon Knight. Issue #12 has an interesting variant — a panel with a demon, which was supposed to be printed in one color only, is blank in most issues, with only 1600 copies having the picture as intended (we have one of those 1600 copies for $12, for you collectors of obscure comics trivia). The stories are a lot of fun; Jones gives Ka-Zar and Shanna a refreshingly modern, nuanced relationship as equals, introduces characters like the demon lord Belasco, and generally keeps the pulpy soup bubbling merrily. Anderson starts to leave after the first year, providing breakdowns for a while and then departing completely except for covers, while Ron Frenz takes over the art chores for a while, followed mostly by Armando Gill. Jones leaves with issue #27, though, and the title limps to a conclusion a few issues later, with scripts by Mike Carlin and art by Paul Neary.

Ka-Zar’s most recent incarnation, volume four, doesn’t show up until over a decade later, 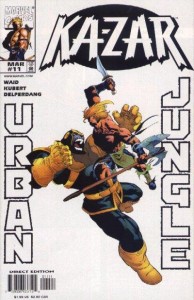 in 1997, and again it’s by a fan-favorite creative team: Mark Waid (fresh off of his acclaimed Captain America run) and Adam Kubert. The first 11 issues are the best of this incarnation, with Waid and Kubert giving Ka-Zar, Shanna and Zabu lots of well-plotted and suitably heroic adventure thrills, culminating in a multi-issue encounter with Thanos (yes, Ka-Zar against Thanos is, on paper, like Aunt May vs. Galactus, but trust me, they make it work). Kubert leaves after that, only coming back for issue #14, which is Waid’s farewell too; he’s followed on scripts by Christopher Priest for three issues, and then by James Felder, with art by Kenny Martinez (I know; I’ve never heard of the two of them, either), as the series ends with #20. What’s the lesson here? Ka-Zar, like Kull, works with A-list creative teams, but neither character is iconic enough to sustain a title with lesser lights. Still, as with Kull, there’s a lot of good reading here — and, with most of volumes three and four on sale (a buck for the volume three issues, and the cover price of $1.99 for the fourth volume, not to mention the special January discounts), it’s considerable value for your comics dollars. 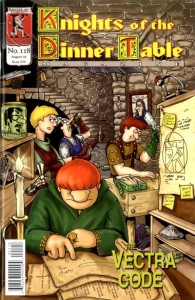 Knights of the Dinner Table

This series shouldn’t work — it’s mostly static, computer-generated panels of characters sitting around the titular table, playing “Hackmaster,” the creators’ version of D&D — but somehow it’s a lot of fun. Even though I’ve never role-played myself,  I like this comic — the writers know their gamers, and skewer their quirks and self-delusions with a great deal of affection.  Of course, it probably helps that, through AABC, I’ve been around enough dungeon-crawlers to get all of the in-jokes, but the sly humor and universal characterization would come through in any case. If you’ve never tried this title, here’s a chance to sample a few issues cheap — especially, again, if you catch those special discounts…. 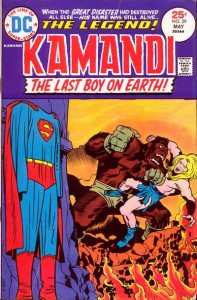 Evaluating back issues of this is, on the surface, easy — Kirby art equals good; not Kirby equals bad — although it’s a little more nuanced than that, since Kirby stops writing the book with issue #37, in favor of Gerry Conway, but stays on the art until #40; then it’s Chic Stone, a young Keith Giffen, and Dick Ayers (none of whom are very interesting) through to the end. The last issue, #59, does have a Jim Starlin Omac back-up, but otherwise stick with the Kirby Kreations — those first 40 issues are his last sustained contribution to comics, except for the 21 issues of Captain America and 19 issues of Eternals (Devil Dinosaur, 2001, and Machine Man don’t last more than single digits, and if you think that Captain Victory counts as a “sustained contribution to comics,” then you’re probably a fan of Super Powers…).

With 40 years of experience in comic reading, collecting and reviewing, English Professor Phil Mateer has an encyclopedic mind for comics. Feel free to ask Phil about storylines, characters, artists or for that matter, any comic book trivia. He will post your questions and answers on the AABC blog. His knowledge is unparalleled! He is also our warehouse manager, so if you are looking for that hard to find comic book, ask Phil!
View all posts by Phil →
This entry was posted in Comics History, News & Promos, Reviews and tagged Adam Kubert, Belasco, Brent Anderson, Bruce Jones, D&D, Don Heck, Jack Kirby, John Buscema, John Severin, Ka-Zar, Kamandi, Knights of the Dinner Table, Kull, Marie Severin, Mark Waid, Mike Ploog, Russ Heath, Savage Land, Shanna, Thanos, Zabu. Bookmark the permalink.