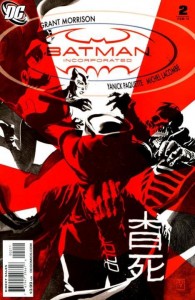 So far, this version of Morrison’s Batman is a lot of fun — no overarching cosmic significance, or Invisibles-like time-spanning conspiracies: just brainy, fun superhero action in Japan, with relaxed, grown-up repartee between a confident Bruce and Catwoman (because, really, giant octupi and murderous reincarnated skeleton guys have no chance against the two of them when they’re at the top of their games), and a nice little bow at the end, to wrap up this first installment in the franchising of the Dark Knight in fine style.

Two from the Millarverse — Nemesis wraps in typically bloody, all-out-action fashion, as his bad-guy Batman archetype and bad-ass police chief have it out with guns blazing, and a couple of obligatory twists at the end; like most Millar, it’s an entertaining story if you don’t squint at it too much. Superior, meanwhile, hits the halfway point with its title character making his public debut; it’s less successful than Nemesis, partly because it’s (so far) traveling such well-trodden ground (the origins of a superhero, complete with space shuttle rescue, media frenzy, etc., etc.), with even its obligatory twist at the end seeming more expected than startling. Too, McNiven is just a more solid action artist than Yu, with a less-static flow to his panels (although Yu does pay off when he gets to draw a big splash page, or a creepy space monkey). Will it pick up the pace, and craft a satisfying story too? Tune in in 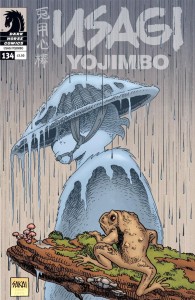 A stand-alone story, as most of Sakai’s are, and, as always, a very well-crafted and fun tale. You wouldn’t think anthropomorphic critters living in feudal Japan could sustain a couple of decades’ worth of entertainment, but here we are, and this episode, featuring the (literally) foxy con-artist Kitsune, her young helper Kiyoko, and three very Stooge-like underlings is a good example of how Sakai’s been able to use his deceptively-simple style and large, interlocking cast of intriguing characters to make it all work so well for so long.

Fraction and Gillen make a good writing team — there’s a lot of imagination and style there — and they play well with Land’s own stylish fashion-mag sensibilities, especially now that he’s starting to grow beyond them.  With most of the X-Men quarantined on their island with mutant flu, and a new group of humans with test-tube-derived mutant powers operating in San Francisco (and Emma and Kitty debating whether to kill Sebastian Shaw — until Fantomex gets bored and takes matters into his own hands, with spectacularly bad results), there’s more than enough going on to keep the pot boiling, and readers interested. 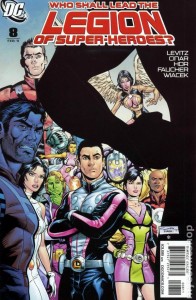 Speaking of knowing how to keep the plot pot boiling with a large cast… Levitz has been doing it with the Legion for parts of five decades now, and here he mixes in over a dozen characters, a Durlan conspiracy, a couple of other subplots and a Legion leader election, all with effortless aplomb (just watching the election roll call, with the leadership votes of each of the 25 LSH members giving us subtle information about their relationships and personalities, is a classic example of how to communicate character by showing instead of telling). Ever since a teenage Jim Shooter started scripting them back in the ’60s, a good LSH tale has been about combining just the right percentages of soap opera and science, and Levitz brews up a decent blend here. 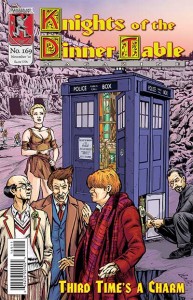 Stuff I bought, but don’t have anything new to talk about, so look up pastreviews in the archives if you care:

With 40 years of experience in comic reading, collecting and reviewing, English Professor Phil Mateer has an encyclopedic mind for comics. Feel free to ask Phil about storylines, characters, artists or for that matter, any comic book trivia. He will post your questions and answers on the AABC blog. His knowledge is unparalleled! He is also our warehouse manager, so if you are looking for that hard to find comic book, ask Phil!
View all posts by Phil →
This entry was posted in New Comics, Reviews and tagged Batman, Batman Inc., Catwoman, grant Morrison, Greg Land, Kieron Gillen, Legion of Super-Heroes, Leonil Yu, Mark Millar, Matt Fraction, Nemesis, Paul Levitz, Stan Sakai, Steve McNiven, Superior, Usagi Yojimbo, X-men. Bookmark the permalink.