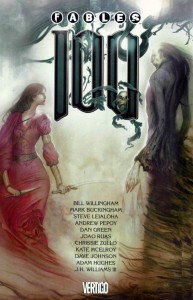 … but wait, there’s more — and rightly so, since the price of this book is $10.00. Still, in addition to the 63-page main story, a huge magical battle with Willingham’s typical closely-plotted strategy and tactics and Buckingham’s lush, imaginative art, there’s: a nine-page short story written by Buckingham and illustrated by Willingham (everyone forgets that he got his start on Elementals as both a scripter and artist) that seeds a major plot development for future issues, 16 pages of various short pieces written by Willingham and illustrated by the likes of Adam Hughes, Chrissie Zullo, J.H. Williams III, and others, plus a playable board game, plus a “Fables paper puppet theater,” complete with sets and stand-up figures to cut out and pose. Fables has been optioned as a TV series for a while now, and whether it will ever make it through all the hurdles and hoops is anyone’s guess, but if it ever does, this collector’s item will be worth a mint. That isn’t why you should buy it, though: you should buy it because it’s a delight, both to read and to look at, and a cool tribute to one of the best books on the stands for the last eight years. 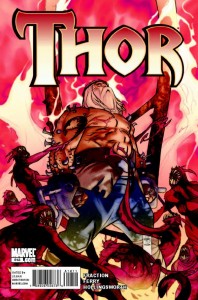 Marvel’s been pumping out the Thor product, in anticipation of May’s big-tentpole major-movie release (the trailer’s out, and contains… reason for optimism, let’s say, especially if they continue to tweak the special effects). A lot of the current comic-book stuff is just mediocre, space-filling product, but this week features the two books that stand above the rest: Thor, the main book, offers Matt Fraction continuing to rearrange characters and pieces to bring the comic back to basic, reader-friendly ground, and doing it admirably, with old characters appearing in new guises and major threats looming large; considering that he’s currently scripting Iron Man, Uncanny X-Men and this, and keeping all of them both fan-centric and exciting, he’s one of Marvel’s best resources right now. Thor: The Mighty Avenger is more of a “Year One” take, but liberally spiced with charm and wit; it’s very friendly to new readers too, but it’s also been cancelled, so there are only a few issues to go. Pity, that, but pick them up while you can (and look for the trade collecting the first six issues soon), and maybe Marvel will reconsider; both Langridge and Samnee deserve to spend more time with this appealing version of the character. 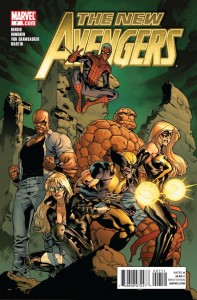 Bendis has been one of Marvel’s other big resources for over a decade now, and he’s currently making both Avengers books compelling and fun. This one leans more toward the quirky and the offbeat, while the regular, adjectiveless Avengers offers more solid adventure fare (that’s the difference between the artists: John Romita Jr. over there, and Stuart Immonen over here), and this issue shows off the book’s charms: it’s one of those in-between-crises stories where the team cleans up, solves some babysitting problems in both funny and logical fashion, welcomes a new member and a new concierge/cook, and does a lot of sitting around and talking (not that there’s anything wrong with that last part; with Bendis, the dialogue is half the fun, especially with Spider-Man, Wolverine, the 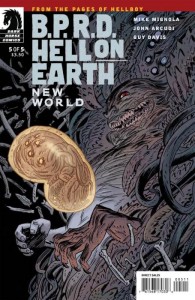 Thing, and Luke and Jessica Cage in the group). If you’re interested in well-done mainstream Marvel superhero stuff, this is where to start.

In a lot of weeks, this book would have been relegated to the “stuff I bought and didn’t have much to say about” list, but so few noteworthy comics shipped that it’s easier to just mention it here: blah blah blah Mignola/Arcudi blah blah Davis blah great-looking monsters blah blah Lovecraftian apocalypse blah check it out. 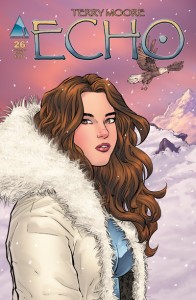 Same here — this book is entering its home stretch (it’s supposed to end the story with issue #30, I think), so this issue is mostly about getting all the pieces in place for the big bad-guy cosmic-collider Arctic-fortress-attack endgame. If you’ve been reading previous issues, then you’re likely hooked and still onboard; if not, then don’t start here: pick up the first trade and sink into Moore’s story of love, memory and really really cool explosions and weird science from the very beginning instead.

Stuff I didn’t buy, but wanted to comment on anyway: 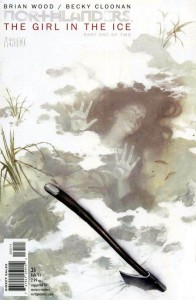 Worth noting because Cloonan and Wood are teaming up for this two-issue arc, and anyone who’s liked the two Demo series that they’ve collaborated on in the past should take a look: these two bring out the best in one another, and between the murder mystery involving a girl frozen in ice, the sprawling Scandinavian landscapes, and the grim, stubbornly-moral main character, there’s plenty to appreciate here. 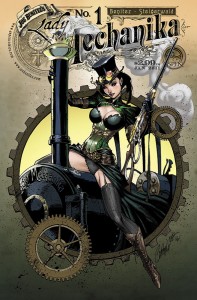 You could tell this steampunk fantasy was published by Aspen even without a credit: Benitez’s interchangeable babes are very much in the Michael Turner/J. Scott Campbell tradition. If you want brains and a well-realized world with your ‘bots, you should probably be reading Girl Genius instead, but if pinups and poses and cool-looking splashes are enough for you, and if the idea of a Victorian Danger Girl sounds intriguing, then here you go.

With 40 years of experience in comic reading, collecting and reviewing, English Professor Phil Mateer has an encyclopedic mind for comics. Feel free to ask Phil about storylines, characters, artists or for that matter, any comic book trivia. He will post your questions and answers on the AABC blog. His knowledge is unparalleled! He is also our warehouse manager, so if you are looking for that hard to find comic book, ask Phil!
View all posts by Phil →
This entry was posted in New Comics, Reviews and tagged Adam Hughes, Avengers, B.P.R.D., Becky Cloonan, Bendis, Brian Wood, Buckingham, Campbell, Danger Girl, Davis, Echo, Fables, Girl Genius, Joe Benitez, Lady Mechanika, Matt Fraction, Mignola, Northlanders, steampunk, Terry Moore, Thor, Willingham. Bookmark the permalink.